The city's new transportation culture is already in evidence in Strathcona neighbourhood, where staff have been busy adding traffic calming and walkability measures.

Some RTH contributors attended a meeting last night with a group of Transportation managers, and we're happy to report that the city's new transportation culture is already in evidence in Strathcona neighbourhood, where staff have been busy adding traffic calming and walkability measures.

There are new zebra crossings at several locations, including the corner of Locke Street North and Napier. I love the senior citizens crossing in this photo: 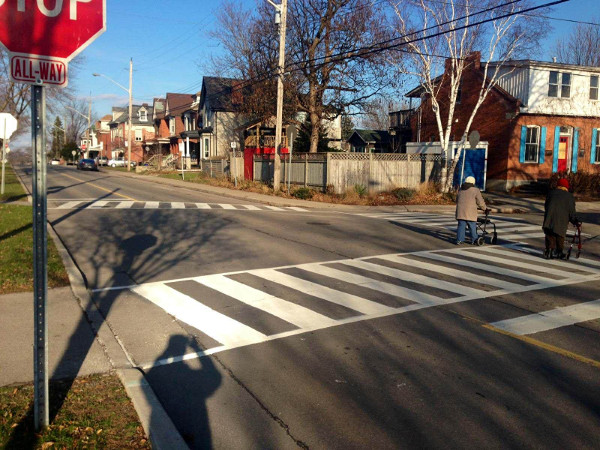 This boost in walkability will benefit the new bike share station at Victoria Park just north of the intersection. 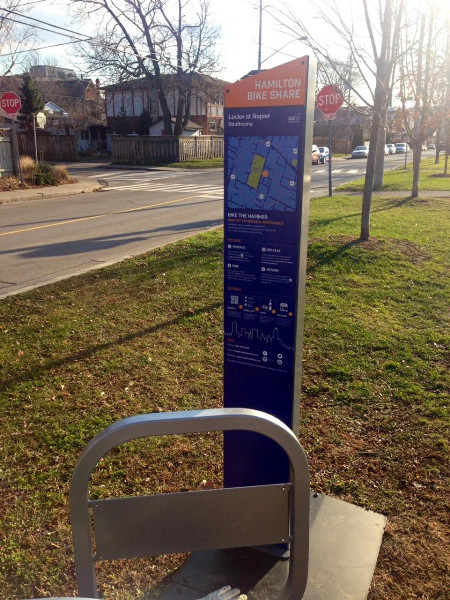 Also on Locke Street, there are new zebra crossings at Florence and at Peter. 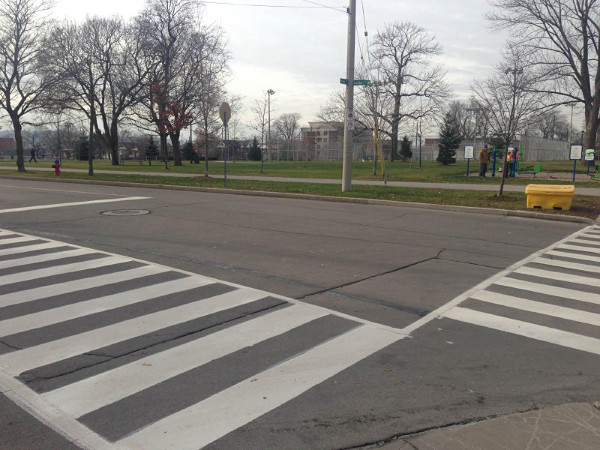 Just a few years ago, there weren't even stop signs at most of these intersections, so it's nice to see things getting progressively better.

Zebras are marching all around Victoria Park, with new crossings on the west side at Strathcona and Head. 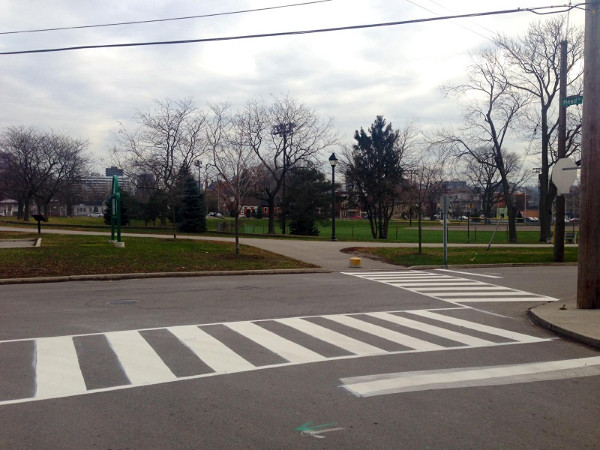 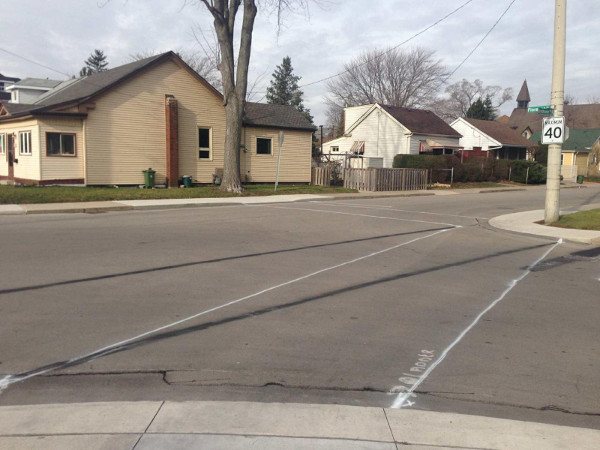 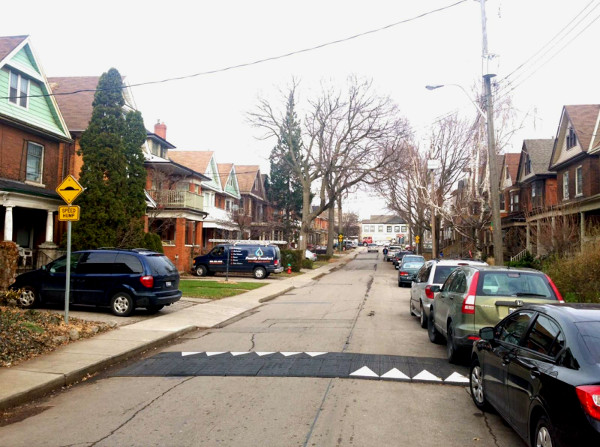 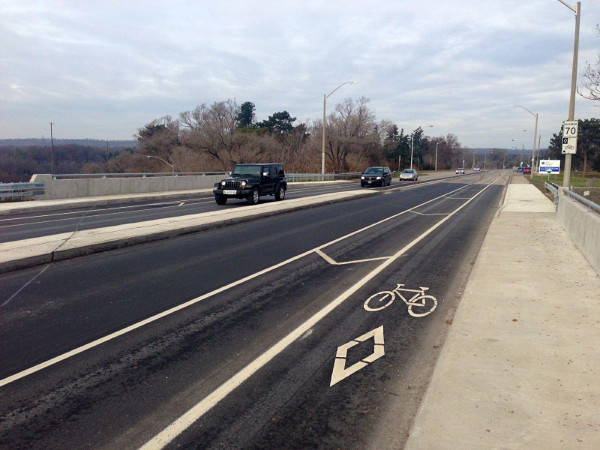 This isn't in Strathcona, but the new LED lights downtown deserve a shout-out. They're much brighter and more visible for cyclists and pedestrians on Main and King between James and Queen.

There are even sidewalk-specific LED lights halfway down the poles on King/Main between James and Queen. This should become standard for walkable urban areas. 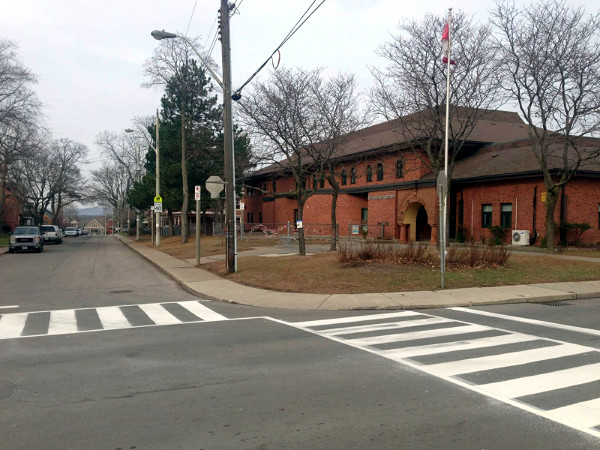 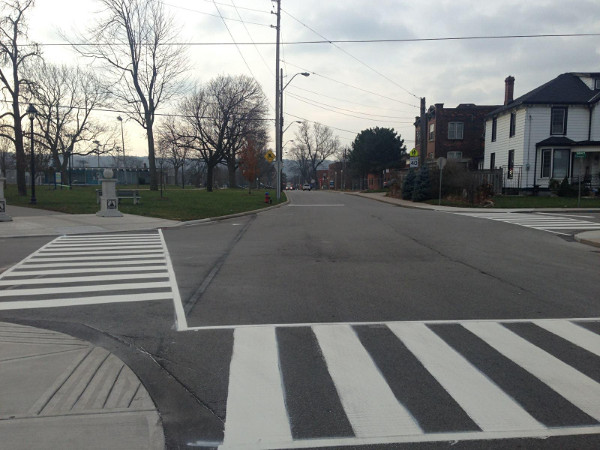 Zebra crossings at Strathcona and Florence

Would love to see some more of this here in the east end. Walkability=accessibility, universal design, inclusiveness.

"Just a few years ago, there weren't even stop signs at most of these intersections, so it's nice to see things getting progressively better."

I'm all for zebra crossings, but I'm a disappointed to see the writer imply that stop signs are an effective means of traffic calming. They get drivers to stop at a defined point on the street but do nothing to control the speed outside the immediate area of that point. See: http://www.streetsblog.org/2011/04/26/to...

Residents and the city need to stop with the knee-jerk adding of stop signs. Not only do they not calm traffic effectively, they increase fuel consumption and make cycling more difficult.

I can assure you though that there are still plenty of intersections where traffic control, not even calming, is still needed: we just managed to have a stop sign installed in Ainslie Wood at a very dangerous and formerly totally-uncontrolled three-way intersection.

Also, stop signs at the bottom of downslopes are a seriously dangerous child hazard. After putting in so much energy going uphill, there is a strong temptation to not stop at the stop sign on the downhill. Children surprise, surprise lack the maturity to perform adult risk analysis.

Which is why it is an important child safety measure to eliminate cut-through car drivers from residential streets. Then 4-way stop signs are no longer needed as traffic calming measures and can be removed, removing these child safety hazards which do not belong in residential neighbourhoods.

All-ways are probably better than facing stops for this, since everybody sees the kid coming and not stopping. I'd be perfectly happy with all-ways if we could get exemptions made for bikes on side-road bike-routes like Napier.

Just a "yield to bikes" sign below the all-way-stop.

agreed, but in the absence of a whole-scale plan to rebuild all of these streets so it's physically impossible to speed, this is the next best thing. Hope to see more humps and bumpouts come to our lower city hoods over the next year.

Everyone loves Europe here. Why no promotion of roundabouts? Or 4 ways yeilds. Four way stops suck.

Put a Yield sign in front of a Hamilton driver and they won't have an iota of a clue what to do with it. Ask all the drivers who've zoomed past me while trying to cross at the 403 on-ramp by Columbia College!

That's even worse because that's one of the blessed few "Yield to pedestrians" signs in the city. Most drivers don't realize that yield signs aren't just about the traffic you're merging with, but that's one of the few cases where it's pretty freaking specific.

Notice how Brantford handles a similar situation to our various "yield" ramps:

Do you prefer examples from Japan? Osaka is a very liveable city with a 25% cycling mode share.

Or take a look at this video. Look carefully for how the guard enforcing the entrance to the car-free zone bows politely to passing cyclists.

The Mamachari is very popular in Japan for child transportation.