Richard Heinberg: The Party's Over and Powerdown

Richard Heinberg makes a compelling but accessible case that global oil production will probably peak within the decade. More important, he has some ideas on what to do about it.

(See also: Interview with Richard Heinberg in this issue.) 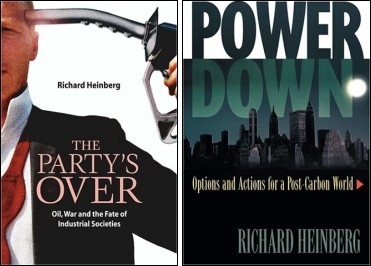 The Party's Over and Powerdown, by Richard Heinberg

One of the first of a spate of books that deal with the subject, Richard Heinberg's The Party's Over: Oil, War and the Fate of Industrial Societies makes a compelling but accessible case that global oil production will probably peak within the decade.

Sharing E. F. Schumacher's view that energy is not merely a commodity but a foundation for all economic activity, Heinberg investigates the history of energy use and draws some alarming conclusions. Industrial society is completely dependent on oil for its most basic functions, and no other current or likely energy source shares either oil's versatility or portability.

After reviewing the views of cornucopian economists, pollution-fixated environmentalists, and rosy politicians, Heinberg turns to the experts on the ground: independent petroleum geologists. Based on their work and research, global oil discovery peaked in the 1960s and global oil production will peak in a matter of years. After the peak, oil production will decline steadily from year to year, threatening shortages and driving up prices.

With helpful backgrounders in physics, ecology, and cultural anthropology, Heinberg explains how the cheap, abundant energy provided by oil is behind the past century's exponential growth in human population and per-capita energy use.

Heinberg reviews oil's future prospects based on the best available reserve estimates and examines current and potential alternatives, including the much-ballyhooed "hydrogen economy". He concludes that oil will almost certainly go into decline within the decade, much too soon for any potential replacement to pick up the slack.

The implications for industrial society are dire, and he goes through each sector in turn, from oil-intensive car-based transportation and oil-based industrial agriculture to heating and cooling, public health, and telecommunications. 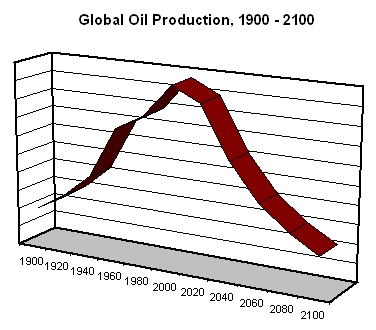 Chart: Global oil production is expected to peak some time in the early twenty-first century.

In 2004, Heinberg wrote a follow-up called Powerdown: Options and Actions for a Post-Carbon World. In Powerdown, Heinberg extrapolates his conclusions from The Party's Over and looks at how – and whether – industrial societies can endure the end of abundant oil.

Eventually, the civilization reaches either a maintenance crisis or a depletion crisis, when it can no longer obtain enough energy and/or material to carry on. Contained in the crisis are complications from soil depletion, local climate change due to deforestation and mining, runoff and pollution of water systems, and social decay. The civilization degenerates into smaller organizations, often marked by infighting and competition for dwindling resources.

If this scenario sounds familiar, Heinberg argues, it's because modern industrial society is entering the early stages of its own depletion crisis.

Instead of wringing his hands helplessly, Heinberg identifies four broad strategies humans might follow in the coming years:

After sketching each strategy in detail, Heinberg explains why the two choices most likely to be chosen by elites – Last One Standing and Magic Elixir – could turn a collapse into a cataclysm.

In contrast, he makes an impassioned case for the two strategies he believes have the best chance of guiding humanity through a smooth transition to a post-carbon society: Powerdown, in order to wean ourselves off abundant energy, and Building Lifeboats, to preserve as much of our culture as possible in case Powerdown fails or is thwarted.

Richard Heinberg, from Santa Rosa, California, has been writing about energy resources issues and the dynamics of cultural change for many years. A member of the core faculty at New College of California, he is an award-winning author of three previous books. His Museletter (http://www.museletter.com) was nominated for its "Best Alternative Newsletter" award by Utne Reader in 1993.