It's past time to conform our zoning bylaws with the developed world's best practices, instead of watering down our practices to conform to our outdated design guidelines.

This is exactly what I've mused about over the years for the parking garage on York Boulevard across from the Farmers' market: street retail added in simply without a massive building renovation. 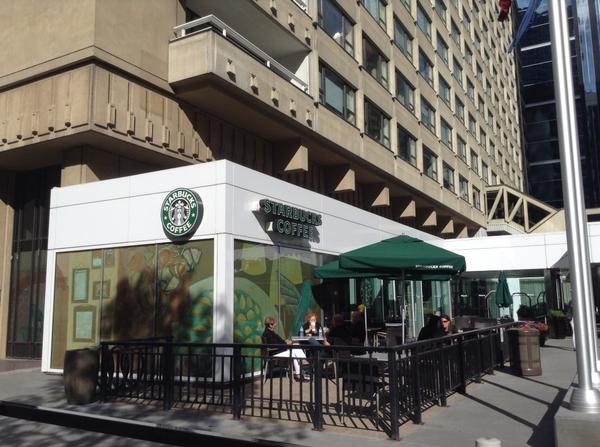 Think of how many buildings in Hamilton that have poor street presence could benefit from this kind of treatment. Various spots of Jackson Square and the City Centre, almost any street-facing apartment building where a few ground floor units could be converted to retail - think of the apartment buildings on York between Pearl and Locke.

More generally, I'm talking about turning single-use buildings into mixed-use buildings. The more diversity of destinations that are close to each other, the easier it is for people to get to them without needing to jump in the car.

For example, we are planning new schools and recreation centres around the new stadium. We could do it like the new North Toronto Collegiate Institute, a high school just built in Toronto with apartments and condos above and a few retail spaces facing the street. This is in the middle of an already existing high density neighbourhood. Surely a grocery store and sports pub with a nice patio facing Cannon Street would do a great business year-round, let alone event days at the stadium.

A year ago I wrote about a small retail space at Locke and Peter that gained much interest from business owners. City Hall informed them, and the building owner, that they were going to restrict retail from going into that location and instead give it a ground floor residential zoning - even though it had already been a retail business for decades.

Two years later, that narrow-minded planning perspective has resulted in a still-empty ground floor along with the loss of business taxes the city would have received.

Hamilton really needs to get past its narrow-minded preference for single-use zoning. During its search for a location, the Mustard Seed Food Coop was considering the ground floor of Good Shepherd Square on King Street West.

It didn't work for them, but the matter was moot because the city said no retail can go there. In a huge retail space. On King Street. Downtown.

We need to think bigger than low-density suburban separation of uses in how our city develops. For example, the soon-to-be-approved master plan for the Barton/Tiffany lands [PDF], specifically along Caroline Street, presents a great opportunity for a wider than normal pedestrian promenade running between Cannon and a pedestrian bridge to Bayfront Park.

The bridge provides a great opportunity for a design competition so the end result is something dramatic and an instant landmark enhancing life for this new district being built in an established neighbourhood. Caroline Street would become a great street not only connecting downtown to Bayfront, but as a patio and retail hub in between Central Park and Bayfront Park.

The current draft for this area seems to take this idea into account, but the pedestrian bridge simply being labeled "future connection to Bayfront" should become a central part of this planning process and should be built along with the first phase of condos.

See page 31 and 51-54 of teh Barton-Tiffany Urban Design Study [DFP] for the Caroline proposal.

Time to Get Serious

It's time for Hamilton to get serious about encouraging mixed uses by allowing small scale businesses to locate in our neighbourhoods, and by demanding mixed uses facing the street in new facilities such as an urban high-school/rec centre in our stadium district or new McMaster campus downtown on Bay Street.

Opportunities like the Stadium District and Barton Tiffany are destined to become no different than the myriad of previous grand plans in Hamilton.

They look great on paper, and are done in cities all over the world, but here they turn into little more than stand alone box stores, huge parking lots and dead, low-density streets.

It's past time to conform our zoning bylaws with the developed world's best practices, instead of watering down our practices to conform to our outdated design guidelines.

Well done. This is exactly how to make progress in this city. No big hard to implement ideology, just practical best practices to allow the citizens (who include both the business owner and her customers) the maximum flexibility to adapt to the place they live.

A great example of the same thing in Hamilton: The Undermount

They look great on paper, and are done in cities all over the world, but here they turn into little more than stand alone box stores, huge parking lots and dead, low-density streets.

Though I agree with what you are saying in terms of mixed-use, I find it off-putting when you end with defeatism (oh, but this is Hamilton ... others cities do it, if only we could).

Draft plans such as the Barton-Tiffany one cited rarely turn out as envisioned ... why? You consistently point to outdated zoning and a fear of mixed uses? What is the city afraid of, and who is fighting to preserve the status quo?

I think the case for mixed-use spaces has become received wisdom amongst urbanists and planning and design professionals. What is useful is to uncover the logic and politics driving sub-optimal outcomes. For example, what was the city's rationale for not allowing retail on the main floor of the Good Shepherd building or house at Peter and Locke? What changes need to be made to allow it to happen? What are the likely obstacles to making the necessary changes? Without this we stop at the task of envisioning what could be, and that doesn't help us make the political and institutional changes required to make the city we dream of possible.