No LRT Funding Announcement After Meeting With Minister Del Duca

The Transport Minister acknowledged that Council has submitted a comprehensive LRT plan but would not provide an answer on whether full capital funding for rapid transit will apply to the city's plan. 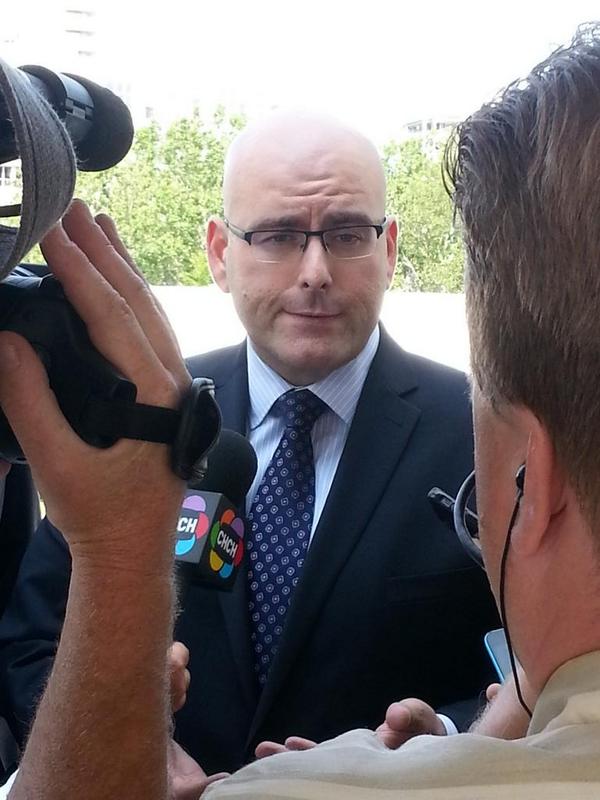 Asked point blank, repeatedly, by reporter Joey Coleman whether the Province will keep its commitment to provide full capital funding for the City's light rail transit (LRT) plan, Del Duca acknowledged the work that City staff have done to prepare the Rapid Ready plan that Council approved in 2012, but would not be drawn on whether the Province will fund that particular plan.

At least he acknowledged that the City has, in fact, submitted an LRT plan. I guess that's progress. He also finished his song-and-dance about his government's commitment to full capital funding with the statement, "It may very well be LRT." 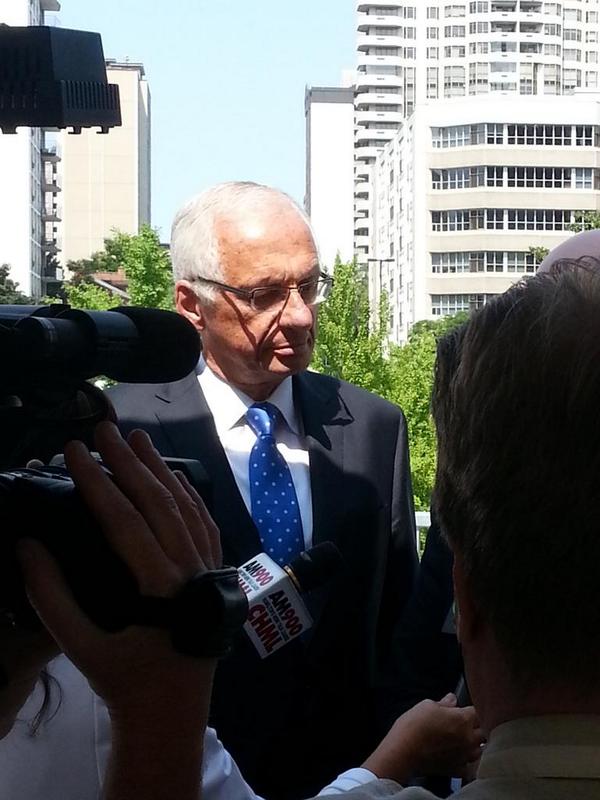 Mayor Bratina took only one question before leaving, and his answer was bizarre and incoherent. Coleman asked why Councillor Lloyd Ferguson and Jason Farr were not in attendance at the meeting, as per the Council motion [PDF; see item 7.7] approved on May 8, 2013. The motion stipulates in part:

That the Mayor be directed to include Councillors Farr, Ferguson and McHattie when communicating on Council transit priorities with the Province of Ontario;

Bratina responded that the motion was related to a Chamber of Commerce initiative and refused to be drawn further. He took no additional questions and walked away from the scrum.

So what was actually said during the meeting? An article just published in the Spectator quotes conflicting accounts of what transpired by attendees Clark and McHattie.

Clark said it was made clear Hamilton has more work to do, to make its case for a rapid transit project, but added the specifics will come from Metrolinx and senior provincial staff in the coming weeks or months.

McHattie, by contrast, said the minister praised the work already competed by Hamilton and seemed to think "we've done enough" to take the next step.

Of course, if the meeting was open to the public, we would not have to try and piece together what was said based on the impressions of people who were in attendance.

Councillor Sam Merulla, who is a member of the Mayor's Governance Advisory Committee, refused to attend because he could not get a definitive answer on whether the meeting was even legal.

In a news release issued on Wednesday, Merulla stated, "I don't think it is too much to ask public officials, to not conduct public matters in secret".

So to interpret the Ministers policalspeak into something people can understand, it means don't hold your breath waiting for it to happen anytime soon, because it isn't going to happen.

Or maybe it means, We're gonna wait until after the election when someone who isn't bonkers is in charge in the city again.

No it means, we tried to bribe you during an election campaign for a second time, it didn't work, so you are no longer a priority.

Whether the mayor in your opinion is bonkers or not is irrelevant, he is a Liberal himself.

The "promise" is 100% abstract and open-ended. Wish I were more surprised.

What the hell? So all this money spent to date was for what exactly?

$3 million seems like a lot of money, but it's not even a rounding error to a government whose latest budget sits north of $130 billion.

To provide justification for some individual's jobs.

The only real story I see here is whether Sam Merulla was in town today, or if his blowing off the meeting was his way of calling in sick and heading away for the weekend.

He was in the lobby during the meeting and spoke with Joey Coleman during the live feed.

And the sunshine list members wonder why no cares anymore

Merulla's position around whether the meeting was legal is very puzzling. I worked in government for 30+ years and I've never heard of such a thing. In my experience, these types of meetings (basically a briefing of a new minister on a municipal issue / position by municipal officials) are rarely public. I suspect Merulla did not want to attend in order to avoid taking a position on the issue, despite the fact he has publicly stated he supports LRT provided the province provides 100% of the funding. I can't figure out where Merulla is coming from on this one. Other than to maybe avoid taking a solid position on LRT and risk alienating voters.

The way I see it if you want to accept the LRT project you must vote for McHattie. If you want to reject the project, you vote for Clark. Is this really the ballot box question you want going into the October election?

It sure looks that way. What probably ends up happening is Eisenberger comes up the middle to win, and we get 4 more years of talk and hope for LRT with no concrete decisions made by anyone involved. The big stall continues.

At this point, although I'm still hopeful for LRT, it appears that Rob Ford has poisoned peoples' opinions of what LRT actually is to the point that it's become a political 3rd rail. In the end, I don't care whether it's LRT, BRT, or they just decide to cut Hamilton out of rapid transit altogether. Just make up your minds and get on with it, whatever "it" is. Hopefully some of those hardened opinions begin to soften once Eglinton is up and running in 2020. By then it will be our kids' battle.

As long as they don't waste $5B building a highway to Mount Hope and waste a further $100B subsidizing the associated sprawl that will follow a new highway, I'm fine with a principled stand of "we just don't have the money". All this politicking and making the same non-announcements over and over again is getting tiresome.

If we want LRT, it's ours but the province is not going to save us from our poor local leadership. That's up to us.

Fred is an interesting choice. Thoughtful support rather than blind support ot rejection

Fred wants to turn back the clock on 6 years of consulting and design work. He supports LRT but is afraid to support it....not the kind of leadership this city needs.