Hamilton Light Rail has engaged in years of extensive community outreach, making presentations to community groups across the city and building support.

M. Adrian Brassington has written an op-ed in today's Spectator that largely consists of a complaint against Raise the Hammer and its readers for annoying him with endless evidence-based arguments and studies that show the B-line light rail transit (LRT) is a feasible and prudent investment in Hamilton's future.

His piece totally ignores all of the public engagement and demonstrated support for LRT.

As a founding volunteer of Hamilton Light Rail who spent dozens of hours of my own time giving presentations to a huge range of groups throughout the city and volunteering my time to the City on an advisory committee, I am pretty angry at his claim that pro-LRT people just sit and write boring blogs.

He claims that Councillors are "managers not leaders", which is the first time I've read this job description, and that they have neither the "time nor the inclination to investigate what might be".

This is downright bizarre, since councillors are called on a regular basis to make decisions about "what might be", from building a stadium to planning an aerotropolis to deciding on an urban boundary extension, not to mention making big infrastructure deals with the province, like a $75 million highway interchange in Flamborough.

But what I really don't understand is Brassington's plea that LRT supporters "need to take the cause to the people".

Doesn't he know that we have done precisely that?

We designed a presentation and "took it to the people". I personally and other LRT advocates, entirely voluntarily, made presentations to Councillors, neighbourhood associations, McMaster students and administration, BIAs, Rotary Clubs and business groups all over the City.

Every group that I presented to was convinced by the evidence and officially endorsed LRT in a letter to Council!

Formal support for LRT includes such leading municipal and community organizations as the Hamilton Chamber of Commerce, the Hamilton Spectator editorial board, the Realtors Association of Hamilton-Burlington, Clean Air Hamilton, the Downtown Hamilton BIA, the International Village BIA, various neighbourhood associations and community councils and the McMaster Students Union, as well as thousands of residents from across the city.

Brassington should at least get his facts straight before claiming that LRT supporters don't go directly to the people.

Similarly, the Hamilton Light Rail website has collected over 1,300 expressions of support from Hamiltonians throughout the City, including over 150 in the past few days alone.

Even worse, Brassington seems to have forgotten that City staff themselves "took it to the people", gathering comments from an unprecedented 1,884 residents in every corner of the City ... and found massive support for LRT. 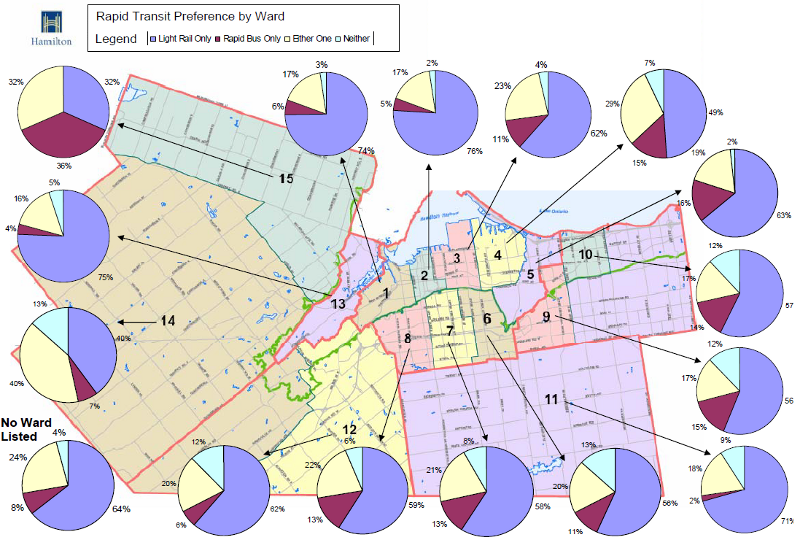 They also formed a Rapid Transit Citizens Advisory Committee made up of volunteer stakeholders from all over the City to help talk to residents and include a wide range of interest groups. I was a member of that group as well.

Against this massive amount of public involvement and engagement, Brassington seems to just know that "The vast majority of Hamiltonians either haven't paid much attention to media coverage of LRT, are entirely disinterested, or are against it."

How does he know this? Has he himself gone out and talked to ordinary Hamiltonians throughout the City about LRT as Hamilton Light Rail volunteers and City staff have done?

And surely, as a lifelong transit user and someone who has read all the studies and evidence himself, he knows enough to make up his own mind.

The fact that he opens his article by confessing that he is "neither for nor against LRT" is hard to believe. What would it take to convince him to take a stand?

Finally, Brassington suggests that pro-LRT supporters are insane (or at least wasting their time) because all the studies, articles and community engagement we've done have not convinced Council (and the community) to support LRT and yet we stubbornly keep at it.

This is also factually wrong: the campaign has had some important successes.

Does he want us to keep re-doing this public engagement over and over endlessly, just to make sure? Why is the bar so high for this particular project?

At some point it's time to say we've done everything we can, and it is time to make a funding decision.

There will always be some people who are opposed to LRT or just don't care. That is no reason to ignore the studies, reports, evidence and broad public support that has already been demonstrated.

If you have not already done so, please visit Hamilton Light Rail and add your statement of support for this transformative project.

Update: updated to add link to the Spectator op-ed.

would it count as public engagement if we held a 5 hour town hall meeting??

The link doesn't work for me. Safari says there are to many redirects, whatever that means.

The Spec website is down right now; I'm sure it will be back up shortly.

I agree with the editorial by Mr. Brassington. RTH blind supporters of LRT are talking to each other only. The wider community couldn't give a rat's behind about transit generally and a $1B LRT specifically. Wake up and smell the obvious please.

I guess the wider community doesn't give too much of a rats ass about community engagement either, cause their opinions obviously weren't reflected in the stats that the city took of LRT opinion across the city. We shouldn't be appealing to the silent "majority" here.

There have been some false Allan Taylor sightings recently but I think this is the real thing.

Fact is those who vote don't want LRT and the community wngagement done many years ago was massaged to elicit positive responses then and is out of date now.

Fact is, those who vote, voted in a pro-LRT anti-aerotropolis mayor (who just happened to completely fail to follow through on either of those stances once taking office)

I suppose your idea of public opinion having an expiry date means we should never do ANY project that takes more than a couple of years to complete. Rather, we should just repeat the engagement process over and over until we all die?

... I'm not even sure that I understand what you just posted.

Fairly straightforward, but I guess you're stunned due to the op-ed piece (wait, RTH readers are now under the microscope? They are being pushed off their high horse? They are being identified as a special interest group that only talks to themselves, and is infuriated when nobody else listens?

Let's break it down, since you need the help:

Fact is those who vote don't want LRT and the community engagement[typo fixed] done many years ago was massaged to elicit positive responses then and is out of date now.

So, the writer is saying that people who are civically engaged and vote don't want LRT. The community engagement that was done years ago was massaged to get positive responses which I think is referring to how the questions were phrased and asked, or that in the case of multiple choice questions, had loaded questions and answers. You know, something like:

A4: Not as good as yesterday, but looking forward to tomorrow!

When we could just as easily get answers like "bad", "cold", "too hot", "indifferent", "My cat's breath smells like cat food", or no response at all. Or, open it up to writing an essay response.

And the final thought is that the community engagement is now out of date as it was done too long ago.

Does it make sense now?

Yes, it makes sense now that the poster was making up nonsense with no facts to back it up. Kinda what I figured, but I didn't want to assume since I was having trouble understanding the broken language.

Fact is those eho vote don't eant LRT and the community engagement done many years ago eas massaged to elicit positive responses then and is out of date noe.

Please tell me, RTHers. How many of the civic engagement questions mentioned the cost of the project? Please do enlighten those of us who are just too thick to get your enthusiasm?

The best engagement would be a city wide vote.

which lrt would win hands down.

So typical of RTH. Someone takes the time and writes a letter to the paper and asks for civil engagement from the pro LRT circle and the people on this site and all he gets is shit and abuse. Not a pretty picture at all.

this letter writer is a chronic time waster who's m.o. is to tell everyone they are doing "citizen engagement" wrong without offering any positive ideas himself. he deserves the response he got.