John and King Unsafe for Pedestrians

Despite a policy to support walking, vehicular travel lanes are consistently given top priority whether we consider permanent infrastructure design or temporary closures for construction.

The city's Gore Park Master Plan has started phase one of construction in the Veterans' Place section between John Street and Hughson Street. The construction fence that went up last week has created an enormous safety issue for pedestrians. 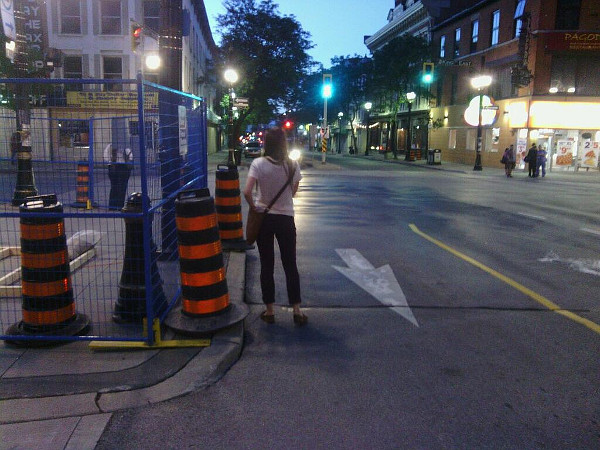 The intersection at John and King currently offers no service to pedestrians crossing King along the West sidewalk of John. The construction fencing has been placed across the sidewalk and right up to the road edge. The pylons are zip-tied to the fence, perhaps to prevent them from falling into traffic and being damaged.

There is a sign on the northwest corner of the intersection directing pedestrians to use the other sidewalk, creating a three-stage crossing.

The southwest corner has no such sign. Pedestrians are left to identify the issue on their own.

A much better way to handle this situation would be for the city to barricade a lane to create a pedestrian access route, and shift each vehicular travel lane east, temporarily eliminating one of the two northbound left turn lanes.

The current situation is horribly unsafe - especially at night, when pedestrians must stand in a wide traffic lane while waiting for the light.

Compounding the safety issue is the added risk of buses turning left from the second lane, squeezing cars even closer to the waiting pedestrians.

The official policy in this city is to prioritize pedestrians, but this is only reflected on paper. In reality, vehicular travel lanes are given priority above all, whether we consider permanent infrastructure design or temporary closures for construction.

Even when this intersection is not under construction, it does not serve any road users well.

The configuration of this intersection provides one southbound lane on John (heavily used by buses), and three northbound lanes - two of which are left-turn lanes. On King, there is a curb lane for passenger pick up, a bus lane and two through-traffic lanes.

Confusing configuration of lanes on John at King

Confusion is rampant in this intersection, since buses must merge from the right lane on John to use the turn lane, then merge back to their dedicated lane on King.

The city needs to rectify the temporary pedestrian issue immediately. And the permanent lane configuration needs to be re-visited as soon as possible.

One workable solution would be to have a dedicated left turn signal for northbound buses, allowing them to turn left into the bus lane directly from the curb lane of John. All other traffic would be stopped during this phase.

This would allow northbound cars to use the second lane, and would also allow for a single left turn lane for non-bus use only.

Of course this isn't the only possible solution, but any user of this intersection - whether pedestrian, driver or transit user - would benefit from a thoughtful redesign.

Thank you, Sean, for a valuable article on the traffic engineering incompetence and negligence that often endangers the people of our city during road works. Needless to say, this danger does not exist in The Netherlands.

This is yet one more example of the tremendous safety benefits to be obtained by adopting Dutch traffic design engineering standards.

This is a bit of a standout, even by Hamilton standard: as you say, even the engineering for vehicles is flawed, since it's unclear who gets what lane after then turn.

Mind you, that confusion is endemic to Main and King between Dundurn and (at least) John: when a road is four or five (or even six for a stretch at King and Dundurn), it's hard to keep track of which left- and right-turning vehicles go where ... and that's assuming that everyone is bothering to stay where they should be, rather than careening across several lanes to get to a side street or highway on-ramp.

A major problem with the buses heading north on John and turning left onto King is that a lot of them are 'mountain buses' headed to the MacNab terminal so they can not really use the dedicated Bus Only lane and they stay in the left lane beside Gore Park. If the stoplight at MacNab was also configured to allow buses to turn left ahead of the regular traffic lanes then buses heading to the terminal could use the bus lane from John to MacNab.

The 1 King route that stops at 19 King W. also has trouble because it suddenly has to make a left turn at James by crossing over three lanes. This route should use the bus lane from 19 King and use the MacNab terminal to get back onto James St S.

Amazing that this configuration has been in place for almost a decade. (I can't recall if it was less chaotic before John South went two-way in 2005.)

It was not as crazy then, since turning could only be done one way. Again, the 2-way conversion that wasn't properly thought out but was hamfistedly implemented, and we continue to deal with, almost a decade later.

How many times have I seen cars stuck in the small piece beween the south side of the Gore and King street, pointing both ways? Daily. How many times am I able to successfully get from John going north, turning left onto King, on the advance? It has timing for 1, maybe 2 cars to make it through without getting stuck. Why is this? Seems like poor implementation.

People turning left need to yield to people going straight and turning right, so it's not a big deal that there are multiple vehicles trying to turn into the same lanes.

However, what is a big deal is having double left turn lanes on a two-way street, where the left turning vehicles must yield to cross traffic and pedestrians. In fact, prior to moving to Hamilton, I thought it was against the road design standards in Ontario. In any case it certainly is not a safe arrangement. Left turns are already the most dangerous manoeuvre on our roadways, and permissive double-lefts (with buses!) just make a bad situation even worse.

Nowhere else in North America have I ever seen multiple left turn lanes on a two-way street without protected signal phases.

Narayan: permissive double left isn't normal at all, no. However, inthis case it might be that the opposing SB traffic is light, or was when the double left was designed. Then again, if that were so they could achieve the same thing by going protected-permissive with an advance green northbound.

I haven't been to that corner in years but I do recall NB traffic used to really back up badly at some times of the day.

A great example of a pedestrian not following the rules and endangering themselves. Cross at the corner and avoid the construction. is not poor engineering its poor judgement on the photo's subject.

ya, if people dont wanna get hit by cars they should get out of the way of the motorists who have places to be

No, don't stand in traffic, stay on the sidewalk, use crosswalks.

I pass by this daily.

The sidewalk is near completely enclosed by the fencing. It's clear from both the south side of the Gore and the north side of King that the sidewalk is closed. There are clear crosswalks everywhere along there. A couple of quick ways to detour around would be:

or, if that doesn't work, proceed down King to Houghson, and cross there.

Also, your picture leaves out the dotted lines for motorists going South on John. They turn normally and merge left - the lines are clearly dotted in this stretch.

What's the big deal? That there is no "pedestrians use other sidewalk" sign? That people must cross the street to get around? Yawn.

BTW the signs for pedestrians didn't go up until after this was published.