Entire City to be Converted to One-Way

Council votes unanimously to close the book on the failed two-way conversion experiment and revert every street citywide to one-way.

After decades envying all the myriad benefits of lower city Hamilton's excellent network of fast, efficient paired one-way thoroughfares that accrued unfairly to lower city residents, the city's Mountain and suburban councillors have approved a motion to extend the one-way street network city-wide. 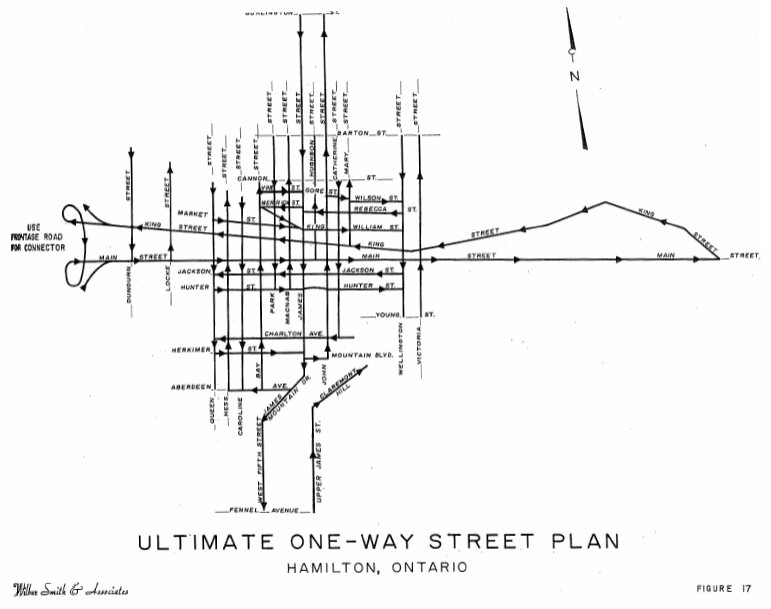 The surprise motion was introduced last night by Ward 8 Councillor Terry Whitehead, who explained, "This is about needs, not wants." He added that he gets dozens of letters and phone calls a week from constituents demanding to have their streets converted.

Mountain residents complaining about the terrible quality of life on their two-way streets cheered the news, excited that they will finally get to enjoy the high-quality experience of living on one-way thoroughfares that elitist lower city residents have long hoarded for themselves.

Ward 2 Councillor Jason Farr seconded the motion, declaring that the lower city two-way conversions over the past decade were a failure and adding an amendment to revert those streets back to one-way. Both the motion and the amendment were carried unanimously in a standing vote.

Ancaster Councillor Lloyd Ferguson angrily pointed out that an earlier Council vote forced a "complete streets" redesign on his beloved Wilson Street. "Wide sidewalks, bike lanes and tree-lined medians are nice and all, but where are the cars supposed to go?"

He called the experiment a "total flop" and demanded to have Ancaster included in the conversions. His amendment also carried unanimously.

Mayor Bob Bratina spoke eloquently in favour of the initiative, reminiscing about the morning in 1956 when he woke up to find that a huge swath of the lower city had been converted to one-way literally overnight. "We need to be that ambitious city again!"

Bratina moved an amendment that this conversion should also happen all at once over a single night, to minimize disruption for motorists and, in Bratina's words, "tear off the bandaid at once." That amendment was also carried unanimously.

Staff said they needed some time to complete the preparations, so Council set a citywide conversion time for midnight on April 1, 2015.

A new northbound street will be added between Upper Paradise and Garth to accommodate local northbound traffic, encompassing the east tip of Clifton Downs Road, Purnell Drive, part of Juanita Drive and West 25th Street to connect to Scenic Drive. Approximately 17 homes will have to be demolished to make room for the new street, which residents have been demanding.

James Street, whose property values collapsed and its street retail businesses all folded after the disastrous two-way conversion in 2002 and 2005, will go back to being one-way southbound, with the one-way flow extended up James Mountain Road (up the mountain) to West 5th, which will also be one-way southbound.

John Street will go back to being one-way northbound, a flow that will continue on a northbound (down the mountain) only Jolley Cut and a northbound-only Upper Wellington.

East-west routes will also be converted to paired one-way thoroughfares, easing the gridlock that has plagued Mountain residents while traffic flows smoothly in the lower city.

In West Hamilton, the one-way westbound flow on King Street will extend right through Westdale and over McMaster in a new elevated highway that will skip right over the McMaster University campus and continue westbound on Cootes Drive to King Street West through downtown Dundas.

Some students and faculty complained about the potential loss of sunlight with a new elevated highway over the campus, but the McMaster engineering department, in cooperation with CanMet Materials Laboratory, pledged to work with the city to construct at least part of the highway out of transparent aluminum.

Ottawa Street, which suffered a devastating collapse in property values as its retail businesses closed down, will be converted to one-way southbound in an attempt to save its last remaining businesses by making them easier to drive past. Curbside parking will be removed so there is room for four lanes.

In the longer term, this alternating pattern will eventually extend all the way to Fifty Road as development continues east from Fruitland.

"My way or the highway?" Why choose?

you've been waiting all year for this, haven't you?

I think he took one year to write it too.

Took me a second.

I love it! Finally a little consideration for the little guy.

I've decided to melt down my bike and start getting my ride ready!

... but for anyone who does obstinately continue cycling after this most enlightened conversion, a suggested accessory

Let's put all the suburbs into one-way cul-de-sacs!

Sanity prevails. I'll be able to get to Limeridge Mall even faster. Talk about your lifestyle. Speaking of which, has any thought been given to converting parking lots to one way?

I love how the original plan was both more and less extreme than what we have today - it included the mountain, and it left Kirkendall completely unscathed.

You're not really surprised are you. One-way streets are great - for other people. Downtown is a sacrifice zone, not the mountain.

Great satire piece, but not nearly as funny as this.

Just think, with genius planning like this we may one day lay claim to being called 'The 18-minute City'!! Talk about ambitious.

*2020 update from the future - after unanimously approving the conversion of all streets to one-way, a late amendment snuck in by lower city councillors had all roads travel only in the northern and eastern direction. However, no one complained as it funnelled drivers away from the lower city (that they see no value in and never wanted to be there anyhow), permanently ending the cycle of lower Hamilton being a racetrack for commuters at the expense of local safety and economic development.

Next year's announcement: full interchanges at all major intersections.

Think of the savings! Reduced costs from operating fewer traffic lights, faster trips creating time savings, no more broadside collisions and their associated costs (which will also reduce insurance rates for Hamilton drivers), fewer idling cars... And we can beautify the city through the use of decorative concrete treatments and planters built at ramp-side.

It will be a marvel of engineering. People will come from all over just to experience it.