Durand Neighbourhood Association president Janice Brown questions the process the city has followed to grant a partial demolition to the iconic church.

Janice Brown, President of the Durand Neighbourhood Association, has sent a letter to the Municipal Heritage Committee, the Permit Review Committee and heritage planning staff with questions about the process the city has followed in approving a permit to demolish two-thirds of James Street Baptist Church. Following is the text of her letter. 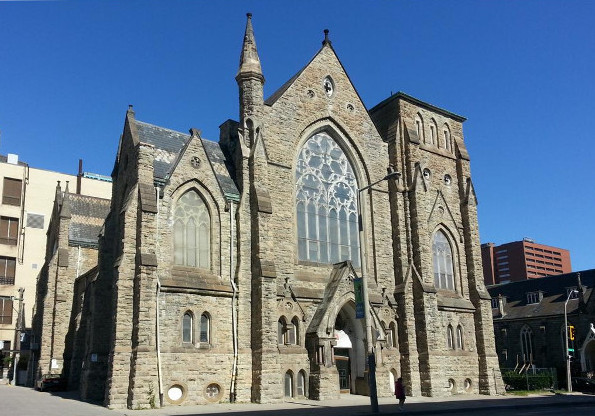 I am writing on behalf of the Durand Neighbourhood Association (DNA) about recent approval to demolish two-thirds of James Street Baptist Church. We are requesting clarification and answers to the following concerns:

1. Use of the "Delegation of Powers" Process

We understand that the term "demolition" in the Ontario Heritage Act implies complete removal: that "alteration" encompasses any kind of partial demolition. According to the municipal by-law on "delegation of powers" for heritage permits, the proposed partial-demolition (alteration) application followed the approval route through the Heritage Permit Review Committee (a sub-committee of the Municipal Heritage Committee) to the Director of Planning.

However, when the proposal to demolish a substantial part of James St. Baptist was submitted to the City, it is the DNA's opinion that it should have set off alarm bells. The Church has been recognized for years as a major downtown landmark heritage building. No decision to demolish, or partly demolish, a heritage building should be taken lightly. This should have been deemed too controversial to follow the "delegation of powers" route.

According to the "Guide to Heritage Permits in the City of Hamilton" produced by the Planning Division of the Planning and Economic Development Department: "following review by the Heritage Permit Review Sub-committee, a decision is made to approve, approve with conditions or deny ... the decision is made by staff, in this case the approval of minor alterations is delegated to the Director of Planning."

In addition, the brochure states: "for the approval of complex applications, applications for demolition etc., that Council should make the decision."

The DNA asks what criteria were used to deem this a minor alteration. The Ontario Heritage Act states:

As a general rule, alterations to heritage properties should repair rather than replace original features, and should not permanently damage heritage materials and construction methods. Where replacement of materials or new construction is necessary, these should match or be compatible with the original. Reversible alterations that allow for the future restoration or reinstatement of heritage features are also preferred.

Why, then, would the request to partially demolish James Street Baptist Church not be to go to the Municipal Heritage Committee for its advice and ultimately to Council for final approval?

There was no opportunity for delegations. As the DNA understands the process, there would only be opportunity for public input should the Permit Review Committee not reach a decision. It goes to the Municipal Heritage Committee and then to Council. In both instances, delegations would be permitted.

The DNA would like to know when the City opted to permit the "delegation of powers" to the Director of Planning. What were the reasons for that change? This process appears to contradict the City's practice and policies regarding citizen engagement.

It is the DNA's understanding that at the time of application, the Planning staff could have called for a peer review of the Heritage Impact Assessment submitted by the present o wner. The DNA wonders why the Permit Review Committee would not have advised the Planning Staff to undertake a peer review. The Architectural Conservancy of Ontario also recommends that reports by structural engineers should be peer-reviewed, especially when such reviews are commissioned by developers who wish to demolish heritage buildings.

This is not to impugn the integrity of any structural engineer but to ensure that there are no doubts regarding the structural integrity of the building in question before any decision regarding its future is taken.

Considering how controversial this application was, a peer review would have helped to erase any doubts in this regard. So, why was a peer review not considered for James Street Baptist?

The "Guide to Heritage Permits" lists the minimum requirements for an applicant before a permit may be granted. These include:

Finally, because the City holds a Heritage Conservation Easement on the building, is Council's approval required to allow the proposed alterations to James St. Baptist Church?

The Durand Neighbourhood Association has a long history of public engagement in Hamilton, in many heritage issues, including Central Public School, St Marks Church, Bank of Montreal, and the Carnegie Library, by working with Councillors and defenders of built heritage. It is regrettable that DNA was not consulted prior to the decision to remove two thirds of a designated landmark, James St Baptist Church in Hamilton's historic Durand neighbourhood.

The Durand Neighbourhood Association asks that you clarify and provide answers to all of our concerns; that you reconsider the decision that seems to have been made without respect to the protocols that are in place, and finally that you return to a more transparent and democratic process to ensure engaged citizens have a voice.

On the one hand, I think it's worth listening to the previous owners who've supported the developer on this partial demolition, stating that the building is in an extremely dire structural state.

That said, you're absolutely right that this is a partial demolition and not an alteration and the legal process should reflect that. If it really is necessary to demolish most of the building, then so be it. But they've still got to do it by the numbers.

you mean the previous owners who knowingly and willfully ran a significant heritage landmark building into a dire state of neglect and disrepair? you mean the previous owners who cared so little about built heritage that they underfunded the maintenance and upkeep of a more than century old building to the point that it is possible that it might be lost to some incredibly suspect property speculator hoping to turn it into a vacant lot? you mean we should listen to anything those people have to say?

Great letter. The process is flawed when a property-owner of a designated property can so easily knock down a building without any evidence of due diligence from the municipality.

As to this statement by DNA in its letter:

"The DNA asks what criteria were used to deem this a minor alteration. The Ontario Heritage Act states:

As a general rule, alterations to heritage properties should repair rather than replace original features, and should not permanently damage heritage materials and construction methods. Where replacement of materials or new construction is necessary, these should match or be compatible with the original. Reversible alterations that allow for the future restoration or reinstatement of heritage features are also preferred."

There is no such wording or even sentiment of such wording in the Ontario Heritage Act. These are but guiding principles in the conservation of built heritage resources, not legislation.