Maple Leaf had made a proposal to Hamilton Council to purchase a 40-hectare site to replace their aging Burlington pork processing facility that would kick-off the NGIP.

These are just the dollars directly injected into Hamilton's economy. The employment gained from one job can generate up to six spin-off jobs indirectly in the form of advertising, accounting, sponsorship, snow-removal, window washing etc. 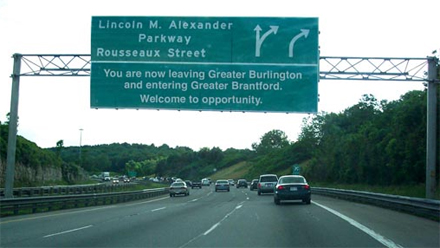 Is Hamilton missing out on business opportunities?

This was Hamilton's to lose. Maple Leaf was hot on Hamilton. They have other facilities in town, we have the majority of their Burlington workforce, and we are centrally located in the Golden Horseshoe, an advantage Hamilton has not nearly been leveraging anywhere close to its potential.

First, I lay blame on City Council. I became nervous about our local leadership when Council decided on November 8 to postpone a vote on whether or not to sell land and rezone, and then again two days later.

The decision was on whether or not to sell land and rezone it - conditionally, no less. That's all. Then the limbo dance started, jockeying and politicking and not handling the job at hand.

It is no wonder Maple Leaf said 'see ya'. Our Council has at best a foggy vision of what they want for Hamilton's future.

Two groups outside council were also responsible, but for different reasons. First, there was those who opposed Red Hill and are now on a mission to see it fail.

I can't understand this thinking. Whether or not you were in favour of the Expressway, I can't support bitterness at the expense of the rest of us.

Some people would like nothing better than to see a highway built to nowhere, just to say "I told you so" to the last residents moving to opportunity elsewhere or about to embark on their daily commute to a job somewhere in the GTA.

The intention of the Expressway was to create more jobs and increase the industrial tax base. Let's at least see it through to fruition.

The other group opposed to Maple Leaf was the suburban residents who have invested everything into their 3,000 square foot McMansions on the fringe of the city (bordering a proposed industrial park) and suddenly want development to stop - after they moved in, of course.

Some Councillors were "upset" by the "process". Wait a minute! This is their process.

Tom Jackson expressed concern about the city's image. I wonder if he thinks Hamilton has just improved its image?

Indecisiveness on whether or not to make a decision is hardly new to politics, but this was an exercise in professional politicians acting like amateurs.

The suburbanites' dream of living next door to Microsoft is as likely as Royal Bank moving its head office from Bay Street, Toronto to Bay Street, Hamilton.

Eighty years ago when Chicago's meat packers and steelworkers defined their city as "the city of big shoulders," they talked about the spirit of a city where blue collars lived and worked with white collars.

The white collar service industry relies on manufacturing. No city can be just a white-collar town. I work in business services and know firsthand how the demise of downtown office workers has been directly related to the loss of our manufacturing.

How ironic that Hamiltonians complained of a possible odour from Maple Leaf in a city that had a coke oven operating for 100 years. Also, this plant has been operating in Burlington for 40 years.

Furthermore, a meat packing plant already exists in the area. Highland Packers has been operating at 432 Highland Road East since 1958.

Downtown Toronto wouldn't be the place it is today if it weren't for the manufacturing that takes place along the 401, in Scarborough and the huge business parks in Mississauga and Etobicoke.

Historically, cities have always located industry at the fringes, especially when they were as polluting as they were in the past. Hamilton's industrial north end and east ends were the fringes of the city when it was decided that industry would operate there, except the city has since grown beyond them.

Perhaps Maple Leaf, with four existing plants and possibly one more in Glanbrook, would decide to locate its head office downtown. Perhaps its outsourced services would be provided by downtown legal, accounting, payroll and advertising firms.

Perhaps Maple Leaf, the largest food producer in Canada, would be a good corporate citizen and would sponsor local events. It would certainly give Dofasco a break from sponsoring everything.

Perhaps Copps Coliseum, or Ivor Wynn Stadium or even a brand new venue would become the Maple Leaf Centre. This happens to be what is going on in other fine cities. This is not "giving in" to corporations. It is working with corporations.

Burlington and now Brantford have been enticing business out of Hamilton for years. The list of companies along the stretch of highway between Guelph Line and Appleby Line that once were located in Hamilton is long, and includes Royal Mattress, OK&D Marketing, Canon, IBM, Bay Area Investigators, Hamilton Magazine, Gennum, AIC, Jan Kelley Marketing, Laidlaw, Siemens and many more.

The list of companies that recently moved to Brantford or chose Brantford over Hamilton includes Ferraro Roche, Proctor and Gamble, and Tim Horton's central bakery. The list is growing.

How much longer can Hamilton bleed business? Are we to become nothing but a bedroom community of commuters?

For Hamilton to proceed, it needs a game plan. More importantly Hamilton needs to decide what it wants to be. The options are simple:

By Paul (registered) | Posted None at

What perhaps is missing in your argument, outside the invalid assumptions made regarding everyone opposing the deal, is perhaps people in Hamilton do not want more of what they have, but are trying to raise their standards and improve their community. You mention we have Highland packers, we also have a very dirty and polluted City and had to deal with Rothsay. We are already heavily saturated with roads yet we are forced to accept yet another expressway right through our largest greenspace in east Hamilton. One "megadeal" will not save the City. True their withdrawl was a blow to Hamilton strength but only because Hamilton did not do it first. The fictional extra jobs are just that fiction. There was no guarantee they would come, they never came to Brandon, and are we increasing our standards by raising a generation of pig butchers? It is a very hard job and we will lose many talented people forced into the field, and unable to continue with such a difficult career. The whole deal was built on supposition and possibilities while ignoring how much the company is grounded in greed and environmental devestation. Hamilton needs to push even harder and become a true steeltown. A steeltown not of grey polluted skies and harmful industry, but a steeltown strong in community and standards which protect Hamiltons interests in all aspects, economical, social,and environmental. Maple Leaf did not make the cut and so should have been left on the cutting room floor, not picked up and repackaged for consumption.

By sean (registered) | Posted None at

We already have stinky coke ovens and a meat processing plant. I guess that makes it perfectly logical that we strive to attract more of them! In fact, why don't we just accept everyone else's garbage while we're at it. They can just dump it on the streets! It is easy to accuse others of NIMBYism. Do you live within sniffing distance of the proposed site? I have smelled the Maple Leaf plant in Burlington. It is awful. I do not blame anyone for not wanting to live near it. There is no doubt that we SHOULD be attracting new employers to Hamilton. Whose place is it to decide which ones are "good" and which ones are "bad"? I suppose it's up to all of us collectively, however I would hope that we would look beyond immediate profit, and consider the long-term picture. Hamilton needs to be a place where people WANT to live. Perhaps it's time we went out of our way to attract fewer heavy industries in order to balance the ones that we already have?