The Homey Appeal of Ottawa Street

Ottawa Street's quirky stores in fabric, antiques and other home decor and design items seem impervious to the nearby presence of big box retailers at the Centre on Barton. 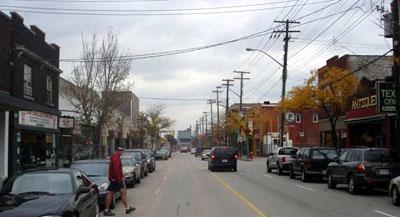 Matthew Green, the owner of Freestyle Fitness on Ottawa Street, agrees that Centre Mall, "employs a tremendous amount of people" in a generally depressed area like the east end. But he also castigates the presence of Centre Mall's "cookie-cutter, suburban dystopian architecture."

You can walk north on Ottawa, a retail strip largely built in the 1920s and '30s, hang out at one of the local independent coffee shops, shop for produce at the Saturday farmers' market, explore the antique shops, and order customized garments such as bridal outfits, wedding suits and even bras at one of the fabric places that still draw people from afar.

"There is nothing else like Ottawa Street," says John Gut, owner of the Textile Centre on Ottawa, which just celebrated its 50th anniversary. Toronto's Spadina and Queen Streets used to have rival fabric stores offering similar customized services, "but that's gone," he adds with certain finality.

Other local commercial retail strips have been sucked dry here in the east end because of the Centre on Barton (formerly Centre Mall), but not Ottawa Street, which in contrast has not relied strictly on the surrounding neighbourhood for sales, says Patty Hayes, executive director of the Ottawa Street Business Improvement Area (BIA).

Ottawa Street has a special "homey" appeal, she explains. "The millennial generation is back sewing and back canning. They don't want to be in the malls where the shirt they are wearing is like everybody else's shirt. It is a very individualist approach in this upcoming generation."

So, the big question is whether the buzz around Ottawa Street will lead it to an eventual gentrification and, dare we say, morph into another Locke Street, which seems to have fewer retail outlets these days.

Hayes responds that the BIA has various strategies to both maintain and enrich the character of Ottawa Street. "We are out marketing the area and so that is a piece of it. And we try to do some recruitment of businesses. I think that [enhanced commercial zoning in the city's new Official Plan] is part of it. The response of the residents and the public is part of it."

One signal of change is a two percent vacancy rate among the storefronts on Ottawa Street, according to Hayes. Employed at the BIA for the past 17 years, she relates that telephone calls are coming fast and furious from potential real estate investors and people who are thinking of buying a property to start a new store for the street and seek advice from her organization.

Furthermore, the retail strip has dramatically changed in the past 12 years from a collection of largely textile- and fabric-oriented retail outlets to a more diverse strip that includes a new woodworking shop and a soon-to-open speciality food store.

Not all of the stores are able to make it financially - a used book outlet had to close, for instance. But there is some stability on the street, notwithstanding the changes. Hayes points out that two-thirds of Ottawa's Street's 123 stores are owner/occupied, thus demonstrating a long-term commitment by the independent retailers.

In 2009, Earl's Court Gallery - both an art gallery and framing shop - moved to Ottawa Street from Hess Village after the latter became less inviting with a greater preponderance of bars and restaurants and fewer art galleries, says proprietor Bob Daniels. Here on Ottawa, he bought two adjoining storefronts to create his gallery.

"When I was in Hess Village, I didn't get much [pedestrian] traffic from Burlington, Oakville and Mississauga. But here we do because it is the fabric stores, quite frankly," that draw their customers, he says.

Moving over to Ottawa Street roughly around the same time was Wendy Kemp's antique store, which used to be called Antiques on Locke while residing on Locke Street. The commercial rents had not started to rise, but she and her partner decided that Ottawa would be a more congenial place for their business. It was suitably renamed Antiques Unlocked after the switch.

Back then, recalls Kemp, "there was a slow growth [in the number of stores] on Ottawa, and then all of a sudden the vacancy has dropped drastically and we are getting investors coming in buying buildings."

She echoes the comment heard regularly on Ottawa Street that the city could do more for the retail strip. The BIA, for instance, pays a person to walk up and down the street to pick up garbage and refuse. "I would rather have the city do it but you know what it's like to have it do anything. It is basically like pulling teeth. So it is the kind of thing you take on yourself because we take pride in our street."

Another community bugbear is the city street sign that forbids from car drivers going west along Barton from turning left onto Ottawa Street.

"For me this is the most counter-intuitive commercial road block that we have. It makes people drive through residential streets to [get to Ottawa]," says Matthew Green. "It's been like this for 20 years and nobody has done anything about it."

Ward 4 city councillor Sam Merulla defends the city's support of Ottawa, pointing for instance to the $100,000 streetscape planning study of the retail strip that he and another councillor have initiated. (Ottawa Street is the boundary between wards 3 and 4.)

Furthermore, he maintained, "[the prohibition of left turns to Ottawa from Barton] has been there as long as I can remember and nobody has brought it to my attention."

"We have to have traffic engineers determine why it is there [and] the public safety component if it were removed," adds Merulla.

However, counters city planner Khaldoon Ahmad, what is happening on Barton "is not good traffic management. You should be able to turn on the street that has the services that you are looking for."

Incidentally, Ahmed is in charge of the city's streetscape study for Ottawa Street. It is also the first one outside downtown Hamilton, he notes. His study will include the no-left turn issue and other transportation policies designed to make Ottawa St. more pedestrian and bike friendly.

Ottawa Street is blessed with a lot of parking for visitors to the area and so Ahmed wonders if it might be feasible to temporarily widen the sidewalks during the various festivals (such as the annual fall Sidewalk Sale) by extending them into the adjacent street parking spots. "Some of that on-street parking could be used for other purposes, bistros, farmers markets, etc."

Ahmed is not too worried about potential gentrification. The top of mind issue for the strip, he says, are no-left turn prohibition, the looming hydro wires on Ottawa St and the persistent truck traffic.

He adds that ambitious chain stores - another sign of gentrification - will find Ottawa Street store locations too tiny for their liking. "A store like Shoppers Drug Mart needs 25,000 to 40,000 square feet and it is not available here."

Honestly, Centre is probably the worst-laid-out mall or box-mall I've ever visited. It's not just terrible for pedestrians, but drivers too. The sprawl in Waterdown or Ancaster is more navigable (although they, too have their share of unnecessary pedestrian barriers).

Hopefully we'll see some spillover develop onto Barton. The transition at Ottawa is jarring.

The ever-present parking lanes on Ottawa make walking along it fine, but crossing it is always a challenge with the busy traffic and the super-long distance between crossings.

Centre is probably the worst-laid-out mall or box-mall I've ever visited.

You have heard of Meadowlands though, right?

Nicely written piece. Although I should mention that the 'other local retail/commercial strips in the east end' haven't been sucked dry by Centre Mall. They were sucked dry decades ago.

I'm intrigued by this new speciality food store coming. Sounds promising. I would really like to see 24-7 curb parking added to Cannon Street through this area on one side and the eventual 2-way bike lanes on Cannon extend through here. Also, bike parking corrals in a few locations would make sense, but Hamilton continues to turn down requests for on-street corrals from all over the city. Not sure why (although Wendy Kemp's quote rings true).

Ottawa Street is both shared by Wards 3 and 4 and divided between them. I wonder how much of the latter frustrates attempts to reform the street design.

Centre Mall was built decades ago. It was certainly a factor in the decline of east-end retail strips. The impact of the Centre on Barton is more complicated ... it can't be blamed, as you probably meant, for sucking other retail strips in the east-end dry.

Ottawa street is a great part of the city. Glad to see the lower city getting more attention.

We have purchased articles of furniture from pretty much every single antique/second-hand store on Ottawa St. We hit it every shop on Saturday mornings with our list of items we still would like - by doing this we have been able to purchase exactly what we were looking for: we just had to have a little patience and wait for them to turn up (including an antique Morris chair, a leather sofa, an arts and crafts library desk, several wardrobes for our old house that has no closets)! It's the best place to shop when you are looking for quality pieces and your budget is tight. We are now on a "Hi, how are you ?" basis with these shop owners (even though we usually don't make a purchase) and it is one of the pleasantest parts of our busy weekend. It doesn't take long to do, and we usually fit in a coffee as well.

Gonna put in a word for All Sorts gallery also - I have bought wedding gifts there, and Christmas gifts. Last year our kids, knowing how much we love the shop, chipped in and bought us a beautiful gift for our anniversary.

Ottawa Street is a great example of a Complete Street... I walk or drive it almost daily. It's got traffic and parking and safe cycling, pedestrians, trees, shops, and public transit. I couldn't agree more about the no-left turn traffic laws... they simply don't make sense. During the last Ottawa Street event on September 28, The Head Shop actually moved their wares into the parking space in front of the store and it make absolute sense. One of the very best features is the (voluntary) reduced speed drivers tend to use... usually it's between 40 and 45k between King and Barton, which is, I believe a benefit of the street's "complete-ness" as drivers take in all that's happening around them and concentrate on driving... as it should be, I think.

Thank you Paul Weinberg for this very nice profile. But how did you forget the farmer's market? What a terrific asset. We visit every Saturday to get our meat and veggies. And then there are the wonderful people at The Canon.

Ottawa St has so much to offer that I was bound to miss something like the farmers market which I go to regularly and the Cannon, a favourite hangout since moving to Hamilton. But I had to have a focus and that for me is the confrontation of the Centre Mall vs the anti-Mall, in Ottawa St. Big box vs. retro antique and fabric.

I was being facetious. In seriousness, I think the Centre Mall on Barton and Ottawa St. are two very different markets allowing them to co-exist in close proximity. One thing, though, I enjoy just going for a stroll along Ottawa St. and I would never do that at the mall.