Review: A Short History of Progress

Humans share a long history of fouling our nests and moving on. What happens when there's nowhere left to go? 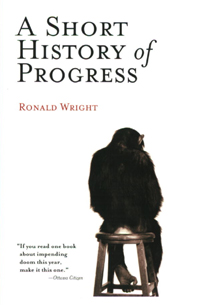 I first heard about this book listening to the Massey Lectures on the CBC a few weeks ago. Someone named Ronald Wright was speaking in urgent tones about the "destructive impulse of the human spirit" and our long history of "progress traps".

Faced with doom and gloom, I reached for the dial. Shania, Sleep Country Canada, and The Bare Naked Ladies reigned supreme on the pre-sets, so I returned to the lecture.

Even doom and gloom is better than the Bare Naked Ladies.

As the lecture progressed I found myself drawn in. Wright is an historian, an archeology buff, and a captivating speaker.

His message appeared to be that we human beings have a long and destructive history of ravaging our planet. Whereas we could simply pack up and move along in earlier times, today it's not so simple. There's only so much planet to go around.

The idea that we, human beings, somehow can't help ourselves and our self-defeating behaviour has been with me for sometime. With every Rwanda, Sudan, and Iraq, it seems easier for me to simply accept the old adage, "We're screwed."

I bought Wright's book, A Short History of Progress (Anansi Press), a few days after hearing the lecture.

The author poses three questions, and attempts to answer them in his book:

While they seem simple enough, as you delve deep into our many mysteries and mistakes, you begin to realize we may never learn the answers.

The first section deals with our distant reign on this planet, something the author refers to as, "The Great Experiment". Neanderthals and Cro-Magnons moved around the planet at will, occasionally converging and killing each other, but generally doing little more than hunting, eating, and simply surviving.

Before long the author introduces us to a concept he calls "Progress Traps," those quirks of human nature that enable us to invent something without truly understanding the consequences of the invention.

Taking us as far back as the Upper Paleolithic period, the author cites one example. "The perfection of hunting spelled the end of hunting as a way of life. Easy meat meant more babies. More babies meant more hunters. More hunters, sooner or later, meant less game."

So begins our ritual of existence: set up camp, destroy everything around us, and move on.

Wright reflects on our inability to engage in long-term planning - to look out for our future - by citing the example of Easter Island. Here, where people literally cut off from the world, they steadfastly chopped down every tree in their quest to build bigger and higher temples to a god that could do nothing to save them from themselves.

In the end, the trees were all gone, the soil was ruined, and the monuments destroyed. The last signs of civilization were a few rotted canoes made from poor quality timber: all that was left.

"The catastrophe on Easter Island," reflects Wright, "was man."

The book takes us through other examples of human haste and waste: the Roman Empire, The Maya and also lesser known civilizations like Sumer, in the Middle East, a 3,000 year old "experiment" that fell victim to land grabs, bloated "priestly corporations concerned more with their own good than that of their lowlier members," and in the end the escalation of armies, an ongoing quest for power, and a great flood - all the elements combined, to end what promised to be an almost "perfect existence."

The book builds to a somewhat inevitable conclusion. Wright likens our current obsession with capitalism to a Pyramid Scheme. "Such a civilization is ... more unstable at its peak, when it has reached maximum demand on the ecology. Unless a new source of wealth or energy appears, it has no room left to raise production or absorb the shock of natural fluctuations."

And, while we nervously ponder our inevitable fate, Wright shows no reader remorse: "Once nature starts to foreclose ... the social contact breaks down. People may suffer stoically for a while, but sooner or later the ruler's relationship with heaven is exposed as a delusion or a lie. Then the temples are looted, the statues thrown down, the barbarians welcomed, and the emperor's naked rump is last seen fleeing through a palace window."

It gets worse. In his examination of where we are from and where we are going, Wright cites many reasons for us to worry for our future, including the alarming growth in our population.

Despite the wreckage of past civilizations littering the earth, the overall experiment of civilization has continued to spread and grow. The numbers (insofar as they can be estimated) break down as follows: a world population of 200 million at Rome's height, in the second century AD; about 400 million by 1500, when Europe reached the Americas; one billion people by 1825, at the start of the Coal Age; 2 billion by 1925, when the Oil Age gets under way; and 6 billion by the year 2000.

He concludes: "Even more startling than the growth is the acceleration. Adding 200 million after Rome took thirteen centuries; adding the last 200 million took only three years."

At the end of the Massey lecture an audience member got up to ask a question. He repeated what he had learned from the book, and then said, simply, "Help!"

While doom and gloom may not be your thing and skepticism certainly abounds whenever naysayers speak their minds, this book is as earnest as they come.

With nearly 300 references scattered about its pages, the author shows himself to be a rare breed: part detail obsessed historian, part emotional, caring, intelligent, outspoken human being. It is a remarkable combination.

It is a remarkable book.

This book has impressed me so much,that I shall recommend it to many.

But I don't think that we should get back to the fears of the 50's-80's ie the bomb will kill us.
WE can and will still be optimistic.

I need help please,everyone is speaking about this book but I do nt understand it because english is my second language.Could you please explain it to me in an easy english please.Thank you very mcuh.