York Ripe for Revitalization Without Demolition

York faces a golden opportunity to be revitalized, in large part due to the strong, stable residential community living there right on the doorstep of this street.

Great news: the Mustard Seed Co-Op has found a home on York Boulevard between Locke and Inchbury.

I was at the unveiling on Friday night, and it was interesting to hear the organizers talk about how difficult it was to find a suitable heritage building that could meet all the needs of a modern grocery store.

Most of us would probably agree that the 'modern' buildings on York from the 1970's are pretty boring and ugly. Yet the rendering below shows how a quick renovation can bring some life and great design to such a building. 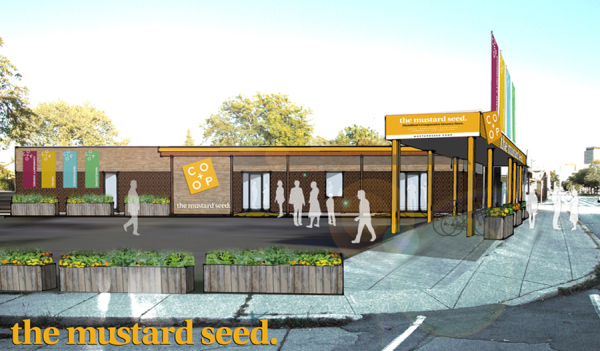 Now imagine a larger renovation, including adding three stories of residential space above the store? Would anyone say that a mixed-use, four-storey building on a major street isn't suitable or dense enough?

Hamilton and Toronto were built on the backs of main streets with this exact design. Look at King Street in Hamilton or Queen in Toronto: a solid streetwall of two- to four stories along their length.

One of the things that allows such streets to be vibrant and full of shoppers is a stable residential neighbourhood immediately adjacent to the retail street. Look at Locke South in Hamilton: one- to three stories along its entire length, yet booming with people and vibrancy.

Narrow, four-storey mixed-use buildings would be ideal for York Boulevard, and would not require homes to be demolished in order to create huge parking lots needed for 10+ storey buildings.

Look at this project on Marine Drive in North Vancouver: 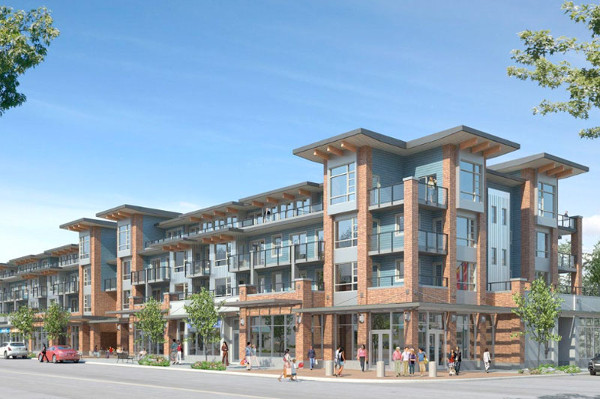 York can become a vibrant retail street again, but not by demolishing the stable residential element that exists immediately adjacent to the strip.

In fact, doing so will create a 'buffer' of parking lots between the stable neighbourhood and retail street. As we've seen downtown on King Street, people aren't so keen to walk past long parking lots to get to a 'main street'.

Residents just off Locke, Ottawa or Queen Street in Toronto routinely walk around the corner to the various shops and services. This should be our aim for York. One of the main keys to making it happen is to calm the actual street itself. York should look something like this:

This is the true test of how serious we are about creating vibrancy along York - changing the lane configuration, adding trees and protected bike lanes. This is one of the few major streets in the downtown area with a wide design, allowing for plenty of room to create a balanced, interesting street.

York faces a golden opportunity to be revitalized, in large part due to the strong, stable residential community living there right on the doorstep of this street. We'd be crazy to damage that strong neighbourhood fabric in the hopes that it will somehow help the street.

The good news is that Ward 1 Councillor Brian McHattie seems to agree. Councillor McHattie has informed us that he will be presenting a motion at the Oct 1 meeting calling for the low-density zoning designation to remain on the homes south of York.

Councillor McHattie agrees with Strathcona residents that retaining and nurturing this stable, successful residential district is vital to the health and vibrancy of the neighbourhood. The outpouring of calls and emails from Strathcona residents over the past several days is a great indicator of how valuable these historic, tree-lined streets are.

Thanks for the encouragement Jason. At the moment we are working very hard just to get The Mustard Seed OPEN this year, but we do have big dreams for the future. We’ve visited the Brattleboro Food Co-op in eastern Vermont that recently re-developed with housing above the Co-op, and that is a big inspiration. We will be leasing the 460 York building and currently are working hard to finance our startup costs so we don't have quite so many options -- but we'll see what the future holds.

We see the Co-op catalyzing more city-positive development along York. See those bicycles in the photo - that's because people are actually going to want to cycle there. We hope to use urban agriculture and other ideas of 'placemaking' to transform this part of York. Do you have other ideas of how the 460 York site can help catalyze change along York Blvd? Email us your ideas at info@mustardseed.coop.

We promise it will look nothing like a Tim Hortons!

I did not mean to offend you in no ways, but at first it kinda look like it , but im thinking of being a member

God, you're the wimpiest troll I've ever seen

Here's a link to the Brattleboro Food Co-op redevelopment http://www.brattleborofoodcoop.coop/index.php?option=com_content&view=category&layout=blog&id=11&Itemid=21

Note that the building is under construction in the Google view.

By the way, I don't think that restricting development to 2.5 storeys is a good idea for any urban neighbourhood, especially one like Strathcona next to downtown and the proposed LRT line. Simply trying to freeze a neighbourhood in time by crude restrictive height zoning is not going to encourage dense mixed use development and it inhibits the natural organic growth of neighbourhoods.

As Ryan has pointed out previously, permissive zoning is better than restrictive use zoning.

It is sometimes difficult to insist on good development projects (as we have found with the 17 storey building on the Thistle site and the broken promises at 427 Aberdeen), but trying to block all denser development in an effort to freeze some neighbourhoods as single family detached residences in certain areas is not the way to go.

Hence our desire to see a good urban built form take shape on York such as marine drive example. Staff indicated that their desire to see so many homes demolished is to create space for parking lots large enough for 10+ storey buildings. Parking lots in place of century homes is a strange idea. The planners would certainly never suggest such an idea in their own neighbourhoods. We feel that intensification can happen in a compatible manner with the neighbourhood.

Indeed: surface parking lots in place of houses (or building higher density) is a terrible idea. Almost all parking should be below ground or within the building, as it is at Urban West and the City Square development on the site of the thistle club.

Why would they even suggest surface parking lots for 10+ storey buildings? Or, did they mean that the lot would need to big enough to support a 10 storey building so underground parking would be economical. That would make more sense.

Sadly, no. They said they didn't feel developers could sell units for enough on York to warrant the cost of underground construction. So, parking would be in the back. Literally half of the assembled blocks would be for parking. Horrible plan. My two cents- if the demand isn't there for free-market condo sales at a necessary price, why are we trying to bulldoze 40 homes to provide an entire corridor of 10+ storey building sites?? NONE of the other 15 sites already assembled and prime candidates for intensification have been. So what problem are trying to solve exactly? It's been a really strange issue on many levels.

Ick. I can see the argument that a small lot is needed for a few surface-parking spots for guests and moving vehicles and other special cases where the underground parking isn't viable, but the predominance of parking should be within the building's footprint.

I was pretty ambivalent about this until I read that it's for parking.

Terrible: there is no rush to develop cut-rate buildings. If they can't sell for prices that will pay for required underground parking we should wait until the demand is there. Maybe when LRT is built?

Agreed. And let's wait until we see intensification happening on some of the other 15 sites on York that are already perfect candidates for it.

How do people get on and off the bus in that street cross-section, especially when a wheel chair ramp needs to be deployed?

I would think that the curb between bike and car lanes would be lowered to the level of the asphalt at intersections and bus stops. This way, bikes could enter and exit bike lanes, pedestrians can cross without steps up or down and wheelchairs, accessibility devises, strollers, etc could cross and get on or off buses.

So would cyclists have to yield to pedestrians similar to the King at Macklin protected lane arrangement? I'd imagine they'd need to raise the bike lane asphalt to be flush with the sidewalk since the standard bus accessibility ramp doesn't go that far down, based on the TTC's recent experience of custom wheelchair ramps on the new non-Transit City streetcars.

Proper bus stop design eliminates conflict between bus passengers and people riding bicycles by routing the bikes behind the stop. This is a common design in The Netherlands, and a key part of any "Let's Go Dutch" initiative.


There is a video showing how this works here:

and some more examples here:

So the King & Macklin design does stand the test of international design. Good to know!

Ya, imagine that, none of your manufactured objections are real!

Hey, that Streetmix site is pretty cool. Maybe an article about that next?

At three lanes a side, you're looking at 30'-45' street width. Streetmix's bus lanes are 10' wide. 2' planting strip beside the bike lane should accommodate this variance.

I think an ideal place to live would be an apartment in a 4-storey walk-up, with an independent coffee shop (something like My Dog Joe) and a branch of the Hamilton Public Library among the tenants on the first floor. Maybe an elevator, thinking ahead to getting older.

Agreed. Belmont is a great example. Yorks biggest problem is York. It's a freeway.

Does it benefit everyone? Who suffers from complete streets? I hope this video links. http://youtube.com/watch?v=eybnVOMEX6w