The Oil Factor tried to be two movies at once: is this movie about war crimes or geopolitics? 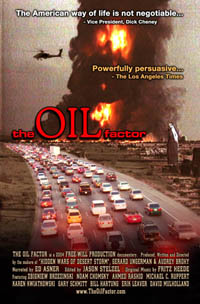 The Oil Factor: Behind the War on Terror

On September 23, Trevor Shaw and I headed down to the old Sky Dragon Centre on King Street (upstairs from Infusions) for a screening of The Oil Factor: Behind the War on Terror, a documentary that investigates the real motives for America's imperial adventures abroad.

Unfortunately, The Oil Factor tried to be two movies at once: it tried simultaneously to report the violence, abuses, and atrocities the United States has committed in Iraq and elsewhere, and also to explain America's real motive there: securing control of mideast oil. I found myself asking: is this movie about war crimes or geopolitics?

As a result, the movie felt muddled, torn between conflicting goals. Yes, the two are tied together, since the way America prosecutes its "war on terror" reflects the underlying dishonesty in its supposed campaign to "spread democracy", but the medium of film just doesn't provide the scope to tackle such a large connection.

Even so, the movie was over-long, dragging in places across long montages of grainy military footage that did little to advance either plot.

After a slow start, The Oil Factor finally delved into America's geopolitical interests in the middle east, surveying foreign policy advisor Zbigniew Brzezinski, Project for a New American Century chairman Gary Schmidt, who sounded grasping and insincere in his insistence that "the American public quickly joined the President in his judgment" on Iraq's threat, and a host of other analysts, including Jane's researcher David Mulholland, retired Lt. Colonel Karen Kwiatkowski, who resigned in disgust after she watched the neoconservative movement take over the reins of the US military, and Noam Chomsky among others.

The movie makes a compelling case that the supply of oil, long considered a strategic resource by the US military, is under threat from a near-term global production peak, and that the US is positioning its military to maintain control over oil supplies when production begins to dwindle.

If the movie had stuck to the geopolitical argument, the result would likely be a tighter, more fast-paced documentary. I can understand the director's desire to report America's war crimes as well; the sequence on America's heavy use of depleted uranium - internationally recognized as a prohibited weapon of mass destruction - is particularly horrifying. However, such an important matter deserves its own film.

The Oil Factor is worth watching for its accessible case that American foreign policy is driven by old-fashioned resource imperialism, but a more focussed approach would have produced a tighter, more compelling film.