Waiting for the Gap to Appear 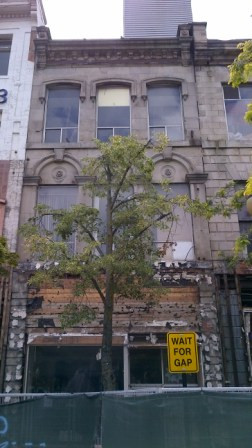 I am now just waiting for the gap to appear.

The compromise solution to the historical Gore Park buildings is really not a solution. It reminds me of the famous 1968 Vietnam War quote, "it became necessary to destroy the town to save it."

The problem with demolishing the buildings and placing the historical facade elements in storage is that people will soon forget what they have lost and hence the will to restore them.

There is also the risk of things going missing, just like when the original fountain was removed from Gore Park and placed in storage.

Gore Park will look like a wasteland in a few years, particularly when the City starts cutting down the trees. As Molly Hayes reported in the Hamilton Spectator on July 18, 2013, the City plans to cut down 85 percent of the trees in Gore Park.

Who is to blame for this mess? Not Councillors Brian McHattie or Jason Farr! At least they are fighting for a better solution.

My question is: where is the Mayor and the Ontario Premier?

The Mayor is the only person on council whose job is to represent the whole city. Furthermore, prior to becoming Mayor, he was the councillor for Ward 2. Why is he not rallying the councillors to save the heart of the city?

And where is Kathleen Wynne, the Ontario Premier? It appears that her Minister for Tourism, Culture and Sport, Michael Chan, has arbitrarily decided not to save the Gore Park Buildings.

It seems to me that the Ontario Heritage Act was design to address these sorts of situations and to protect interests of the citizens of Ontario from special interests and misguided city councils.

Until we get more answers, I am afraid we will simply have to wait for the gap to appear.

Tell Council and the Province to designate the Gore and protect these buildings from demolition:

"Inaction In Action" seems to be another in our long line of city mottos.

Are they going to have time to trash the whole thing in time for the Pan-Am games? That would be special.

thank god for this comment. a HUGE problem in the world is now solved.

I'm thinking the last line should probably read "...protect these buildings from demolition."

If they take the facades down, what's to stop them replacing them in a different configuration? Could they change the gap-toothed streetwall to snaggletoothed (low-high-low-high-low) or fanged (high-low-low-low-high)?

What's to stop them from doing an oopsie and 'accidentally' smashing all the heritage features like what happened with the Balfour?

The City and Province can share credit on the Balfour file.

"In the late evening of April 16, 2008, the building located at 15-21 King William Street, known as the Balfour Building, experienced a partial building collapse in the rear, upper portions of the building. A secondary collapse of the roof occurred on the morning of April 17, 2008, which, in addition to causing extensive interior damage, also caused the 4th floor of the front façade to lean slightly inwards. At approximately 3:00 p.m. on April 19, 2008, while the demolition excavator was pulling back debris, a third collapse occurred which caused the 3rd and 4th floors of the front façade to bulge or buckle. With
the concern of public safety, the contractor shortly thereafter undertook a somewhat controlled collapse razing the front façade....The property at 15-21 King William Street containing the (former) Balfour Building is not designated under the Ontario Heritage Act. It is a listed property, that is listed on the City of Hamilton’s Inventory of Historical and / or Architectural Value.
Accordingly, alterations or demolition of buildings, on any part thereof, on this property, do not require a Heritage Permit, consultation with the Municipal Heritage Committee or Council approval....The Ontario Ministry of Labour (MOL) is the agency that reviews and approves the contractor’s demolition plan / demolition methodology.... When the façade bulged in the afternoon of April 19, 2008, the decision to raze it was that of the demolition contractor having an overriding concern for safety of the workers and general public. It was unfortunate that the decorative lintels could not be salvaged from the wall as they had planned to, however, we are thankful that the collapse and demolition of the Balfour Building concluded with no apparent property damage to other buildings, with no environmental impact (air monitoring equipment was operational) and no personal injury.... As mentioned previously, this (former) building or any part of it was: • not designated under the Ontario Heritage Act;
• not approved for conservation as part of Council’s acceptance of the Provincial Facilitator’s Report in September of 2006; • not required to be retained as part of the demolition process (although the ornamental lintels were planned to be salvaged); • not issued a Stop Order by the Minister of Culture in respect to the demolition required by the CBO’s Emergency Order; • always planned to be demolished with this action referenced in any public presentations by LIUNA and staff during the meetings / considerations dealing with the City’s interest in leasing / purchasing the Lister Building; and, • referenced in the September 23, 2006 Heritage Report by Julian Smith and Clinton Brown (see Appendix E) as a building that “would not be an appropriate candidate for preservation, restoration or rehabilitation… as it would need to be in much better structural condition to be economically viable”. This Heritage Report did recommend that the “decorative stone elements of the façade be carefully removed and retained…..”. "

"Vietnam" "Wasteland" "Heart of the City"

I find this type of hyperbole is quite common in Hamilton but does not help to create constructive conversations in this city at all.

hyperbole is only allowed when kiely uses it

Earlier this summer Clr Farr had confirmed that the owners would be submitting an engineering report of the building's condition to city.

Does anyone here know when it was submitted, and if it is available to the public?