Based on what representatives of Wilson-Blanchard are saying, the best we can hope for in the absence of heritage designation and a stop order for 18-28 King Street East is that the owner will remove some 'heritage elements' from the facades of 18-28 King Street East before demolition and attach them onto whatever eventually gets built on the site.

Despite an agreement less than two weeks ago to hold off demolishing the buildings, the property owner is already removing material from the front of the buildings. 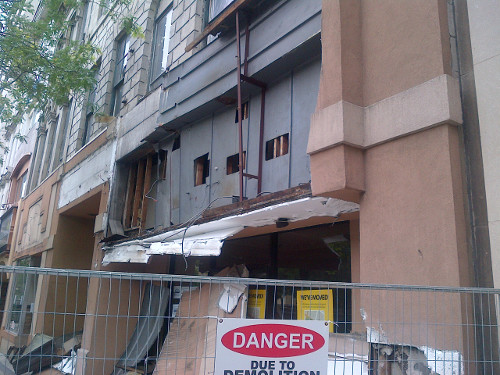 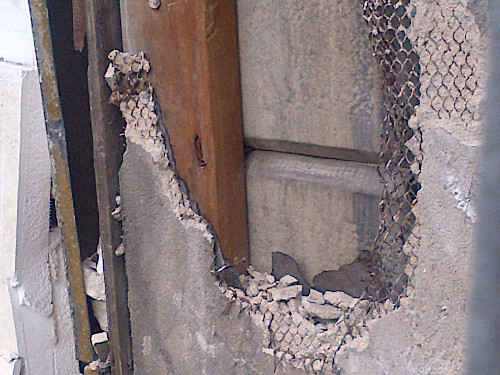 It is important to note that the property owner has neither a development plan nor funding for the site, so we have no idea what a new development might look like or when it might be completed, if ever.

In any case, it is not heritage preservation in any meaningful sense to bolt some facade pieces onto a wholly new construction.

There are already several whole city blocks in the downtown area of Hamilton that have been flattened and have sat for decades as empty gravel lots - including sites owned by Wilson-Blanchard.

It is unconscionable to add to the city's stock of vacant lots without even so much as a plan to build something - particularly when the threatened buildings are as important to the city's and province's built heritage as the Gore District.

What the cascading crises, changing plans, miscommunications and misunderstandings over the past eight months have demonstrated is that the only way to protect these buildings is to designate them under the Ontario Heritage Act.

Enough is enough: we are right on the threshold of losing yet another irreplaceable piece of our built heritage.

City Council needs to issue an intent to designate 18-28 King Street, and indeed the entire Gore District, as a heritage site under the Act. The Ontario Government needs to issue an immediate stop work order so no more of the buildings is removed.

It is not acceptable for one level of government to fail to take action because the other level has also failed to take action. The Act provides distinct powers to the municipality and the Province with respect to heritage protection so there are two layers of protection for important heritage buildings.

The Province is not overstepping its bounds to recognize and protect as important a part of Ontario's heritage as the Gore District and, in particular, the 1840 building at 18-22 that was designed by William Thomas. Its obligation to designate and protect properties is independent of the municipality's obligation.

I have also heard the argument that the City and Province should not impose heritage designation on a property owner who does not wish it. That reasoning entirely misses the purpose of the Ontario Heritage Act.

Designation is most necessary in precisely those cases where a property owner does not recognize the value of heritage and threatens to discard it.

Tell Council and the Province to designate the Gore and protect these buildings from designation:

Designating "facades" is a mockery of heritage preservation. The buildings that face Gore Park must be preserved and used.

Slapping a few elements of the facade on "whatever" is built there is just a slap in the face.

Any towers must be behind the existing buildings. Towers just don't work right at the street in a pedestrian park.

Here at the waterfront, in the Beach area, the lighthouse is an OBVIOUS 'Heritage' project that should garner City attention, but it's been abandoned since 2009, even after an 'Emergency Report' called for a land-transfer to City ...

Definitely follow up on what staff recommended, if anything.

Yes, I get that impression too. Will be following up on this shortly ...

WHAT businesses? There are NO present plans to develop this location.

This surviving historical architecture is one of the many things that drew me to Hamilton from Toronto 16 years ago. While I am heartened that the Lister Block, for instance, was saved from exactly the type of "facade only" bs that is now proposed for Gore, I was saddened to see it turned into office space. There is scads of existing vacant office space in the core already. The revitalization of the core will not be achieved by simply adding to the 9-5 crowd. We need more people living and making consumer purchases in the core. This requires a better blend of venues and services than is presently available. The proximity to highway and transit travel makes the core a prime location for commuters who are tired of the congestion and outlandish real estate prices in Toronto, Mississauga, Oakville and Burlington in addition to those of us who also work in Hamilton and choose not to drive. Fewer dollar stores, parking lots and payday loan locations - more boutiques, cafes and green spaces would go a long way towards making the core a pleasure to inhabit day and night year round. God forbid we see the same type of renovation that befell the Centre Mall - total abomination for anyone who doesn't drive and not even particularly convenient for those who do. Nor do we need to be surrounded by so many high rise towers that you never see the light of day.