We can have more jobs at less cost by investing in our existing infrastructure than by spending half a billion dollars on a greenfield development around the airport.

How will the City of Hamilton's Airport Economic Growth District (AEGD) plan impact your business? The AEGD, or "Aerotropolis", is a City of Hamilton approved plan to rezone 4,500 acres of prime farmland around John C Munroe Hamilton International Airport for employment purposes. The City claims we do not have enough industrial zoned lands to provide jobs for the anticipated growth of our population. 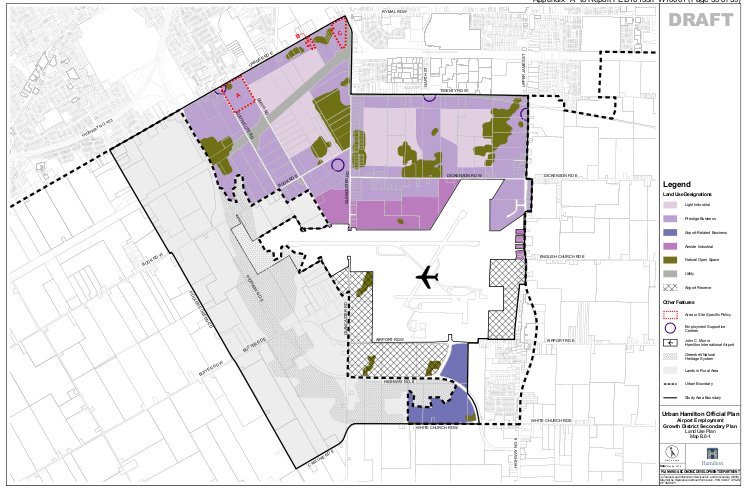 Individuals and community organizations have challenged the City's plan by appealing to the Ontario Municipal Board (OMB). The OMB is scheduled to hear the case in mid-January 2013.

Everyone supports more employment opportunities, but at what cost? The main problem with the Aerotropolis plan is that it is extremely expensive and financially risky for all taxpayers. The City has admitted the costs will come in around $350 million, but 25 kilometres of new sewer lines and required upgrades to our wastewater plant will push the total to over half a billion dollars!

The City has a history of discounting development charges to attract new business, which heaps more debt onto existing businesses and homeowners. This time it will amount to $1,000 for every single resident.

Adding more industrial lands won't guarantee more jobs, but it will guarantee an increase in debt, taxes and rents.

We all want more jobs and we can have them at much less cost than the City's poorly-located Aerotropolis. Our legacy industries once employed tens of thousands more than they do today. These lands and our other business parks are already serviced with roads, sewers, water, hydro and public transit.

It will cost significantly less to increase employment density where infrastructure already exists and where a significant portion of our workforce can walk, cycle or take public transit to work.

Does anyone really believe there is a shortage of industrial land or that the Aerotropolis will be our future economic engine? Mayor Bob Bratina opposes the plan and recently said, "We all know in our heart of hearts that's going to be sprawl residential development."

The City has a $2 billion deficit in maintaining our existing infrastrustructure, which is growing by $200 million per year. This plan would invest another $500 million in new infrastructure to get us out of the hole.

Why not prioritize repairs to infrastructure that already supports existing businesses, the economic engine of today and tomorrow? Why should local businesses be additionally taxed to attract new and potentially competing business?

Your Help is Needed

The City has allocated $300,000 of taxpayer funds to hire experts to defend their plan before the OMB. Your donation is needed today to cover legal and professional planning expertise to defend all Hamiltonians and existing businesses against the City's Aerotropolis plan.

Do not permit the City to accept your silence as consent to spend your taxes on the Aerotropolis. Let them know you support more jobs, less cost as an alternative job creation strategy.

Larry Pomerantz is the Chair of Hamilton Civic League.

If so, when the hell will politicians get it into their thick heads that manufacturing is dead in North America? It's too expensive to make stuff even in Mexico these days. Everything is being manufactured in China and South East Asia. It sucks, but there it is, and that's not going to change unless Canada makes some drastic changes to it's import laws.

The mayor's full quote is dead on here:

If this council is serious on addressing the problems that you have brought forward I would make a motion right now that we freeze the urban boundary and not expand and create urban sprawl. [applause] That’s the … And we haven’t’. We’ve built expressways and right now we’re fighting the province over turning farmland into development land and we all know in our heart of hearts that’s going to be sprawl residential development. It’s not going to be 52,000 jobs, it’s going to be a bunch of houses around the airport.

There are manufacturing places in North America. They primarily assemble and paint things made from parts imported from Asia, but they still use factories here. Less shipping that way.

clarification question, the $1000 for each resident is just dividing the projected servicing costs by Hamilton's population, right? If so then the reality will be more like $150 per resident due to the DC discounts - if we're only talking about direct costs.

Why not prioritize repairs to infrastructure that already supports existing businesses, the economic engine of today and tomorrow?

Very good question. With our infrastructure deficit at $2B in Hamilton only getting worse, the thought of putting off much needed infrastructure upgrades in places where people already live and work so we can lure a bunch of warehouses to the land around the airport seems absurd.

I can't believe I'm saying this, but the Mayor is dead-on. This is only a recipe for sprawl. Expensive sprawl.

The only comment I don't understand is the reference to the use of the land as residential. On June 1, 2012, the OMB ruled that all lands within the AEGD are precluded from being Residential. This is consitent with the places to grow plan and the OP and zoning bylaws approved by the City. I also know of a few residential developers who own land in the AEGD that are trying to unload it. So if everything points to a ban on residential sprawl, why is that always mentioned? I don't care what Brantina says is in his heart. I care about what the planning authorities have to say.

Once the land is brought into the urban boundary, it becomes Hamilton's responsibility to zone it. We have seen time and again that the city is ready, willing and able to rezone industrial land for other purposes.

In other words there is no law to protect us from ourselves. This is why the land must not be brought into the urban boundary.

Simple: what happens when the commercial and industrials plans fail and the city has all this conveniently serviced and uncontaminated lands waiting for development?

If the municipality and those behind this effort argue a need for industrial development space and are prepared to sink hundreds of millions of taxpayer dollars into it, then they should then be able to tell us what forms those industries will take, what they will be producing and for what markets. Surely they can demonstrate a demand, can't they?

According to the exhaustive and very expensive marketing study conducted by Dillon, approximately 70% of all jobs that the Aerotropolis is expected to create will be warehousing, distribution and logistics. This category will also utilize the largest land areas and will negatively, generate the lowest density of jobs per acre. In the words of Counilor Ferguson - there are no companies lining up to get in! The on-site "Aeropark" is approximately 85% vacant and has been availabel for development for over a decade and yet has not been filled.

I am fairly confident that an equally exhaustive study of HIA would demonstrate that the countless unrealistic growth projections have indeed not been realized and yet HIA is touted as the anchor pin to the success of the Aerotropolis.

We can ill afford to risk the $500 Million but if we really did have that much capital - is this the best long term use of the available funds. I have no confidence that this basic question has even been considered.

Now that we're hearing again about B-Line LRT being a Metrolinx priority, why don't we take that $500m and figure out how best to finance the LRT with the province. LRT will be far more transformative than more costly sprawl.

I'd like to hear each and every councillor's response to it in fact.

I thought I would respond to dsa, considering the fire that killed 112 people in Bangeldesh (sp)?

Given the mantra of globalization where labour standards have not been standardized, pushing all to good working conditions, including health and safety issues,
one does have to look at history, check out the Triangle Waistshirt Factory Fire in 1911. In comparing the two events, we are moving backwards.

do some research adn the same conditions exist now in North America, for workers. Such as bosses locking doors that are fire exits, you know workers cannot take unauthorised breaks, so that is the excuse.

You give up to easily

I completely disagree with people who are against residential sprawl. These people forget about children, especially boys who need SPACE to play in around their home with their friends in the neighbourhood, just like children did decades ago. I'm so thankful for the sprawl of the forties and fifties. I had gardens to make, creeks to play in, streets to bicycle in, and lots and lots of grass around my home to play in. Sprawl is worth every penny to children. Don't even think of families living in condos.