After driving past it five or six times a year on the way to the airport or points south, we finally got to see the inside of the Colonel F.G. Ward Pumping Station on the Buffalo lakefront last month. 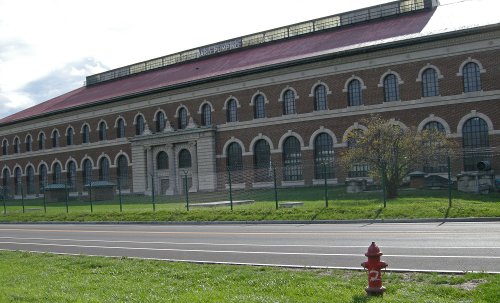 Colonel Francis G Ward Pumping Station. Citizens who chose to pay in person used to enter their building by the majestic front doors and pass directly into the machine hall.

The machine hall turned out to be every bit as impressive as the legend has it. Built in 1915 to serve a projected population of a million, the waterworks now operates at a reduced output with newer equipment to supply a city whose numbers are half what they were in 1950: about 260,000. (The wider "metropolitan area" has about 1.2 million, and the works has arrangements to supply some regions beyond the old city.)

Entrance for the annual visitors day in September was by a rear door at the lake-ward side of the building, where we were greeted by Buffalo Water employees and directed into a long, brilliantly white corridor nicely symbolizing the works' commitment to purity.

Emerging onto a crowded mezzanine, we queued at the table where members of the Buffalo Industrial Heritage Committee (Inc.) were collecting a suggested five dollar donation - ten if you wanted a copy of the booklet on grain elevators as well, which we did. (You can find much of it online.) 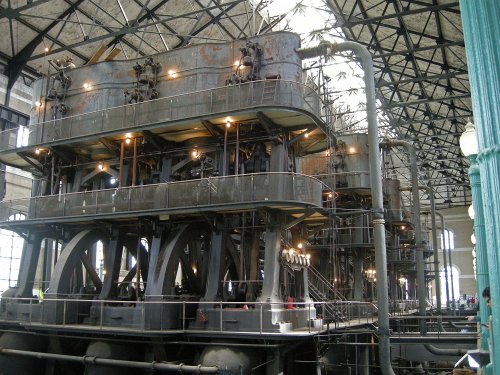 Five triple expansion vertical steam engines mounted over their pumps. When Irving Reynolds came up with this basic design for Allis in 1886 and supplied it to Milwaukee, the reported efficiencies were so good that a special engineering team from Cornell was put together to investigate.

After clearing the congestion at the door, we found ourselves at one corner of a vast skylit space occupied by five immense engine and pump ensembles. These were set out in a single row surrounded by a walkway wide as a road and ornamented with street lights on cast iron standards.

Off in the distance, a crowd of three hundred or so were gathered in the vicinity of loudspeakers on stands, awaiting a twenty minute talk on the pumps. A good deal of serious photographic equipment was on display. 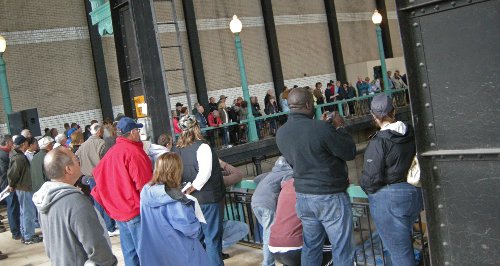 The magnetic power of old iron. A portion of the crowd that turned out for a look at the Holly engines.

Presently, Jerry Malloy, vice-president of the I.H. Committee, switched on his mic and told us, among many other things, that this system was the largest on the continent at the time of construction, and remained on standby until 1970, when a storm felled the powerhouse chimney and so made the coalfired boilers unusable.

Repairs were judged too costly, so the engines were idled and the electrically powered centrifugal pumps installed in the thirties took up the full burden. These last are about to be supplemented with two more centrifugal pumps, currently being wired. 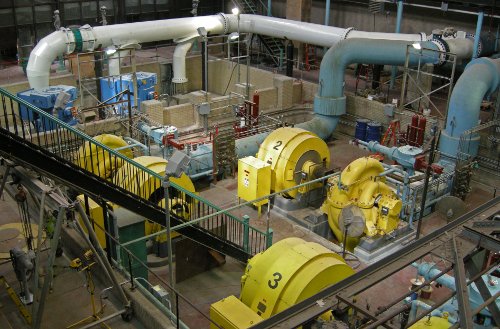 The Ward station equipment belongs to the fourth generation of stationary steam engine development, the era of very large triple expansion rigs - that is, high pressure steam was allowed to expand in three separate cylinders before being exhausted to a condensing chamber, whence hot water was returned to the boilers for reconversion to steam.

Expanding steam pushed pistons attached to pumps which moved, in this case, clarified Lake Erie water from basins next door into the municipal piping network for industrial, domestic and of course religious purposes.

Each of the eleven thousand ton engines, built in Buffalo by Holly Manufacturing, can deliver 30 million gallons a day to the system running at 22 RPM. As with many 20th century industrial processes, the benefits accruing to the community and the owners were obtained at a cost to the health of the workforce.

In this case, the problems arose from the asbestos used in a cement paste applied to hot pipe elbows, and perhaps elsewhere. Some details can be found on the site of this law firm.

As it happens, we have here in Hamilton two intact examples of the second generation of steam engine design, unique in North America. These are the four-story tall beam-engines (1858, made by Gartshore of Dundas) now in preservation down on Woodward Avenue at the Hamilton Museum of Steam and Technology.

The internet presence for this museum is the usual feeble City of Hamilton Website effort (no fault of the Culture Department) but interested readers will find a link to a real-estate-sales type tour, with clickable hot spots.

Toronto has a diminutive version of Buffalo's triple expansion design at its High Water station, built locally by Inglis in 1909, but the connections of the engine and its pumps have been severed. Buffalo's collosi are intact.

This, and the sheer scale of the installation, make the Ward pumping station a good candidate for preservation, à la Chestnut Hill in Boston, but...

Although conservation costs can be high, they can often be spread over a long period, owing to the robust construction of the artifacts - as long as they are under shelter. The Holley engines at the Ward station have been sitting idle since 1970 and so of course need attention inside and out, but their constituent materials are quite durable.

There is discussion about operating one of the five again under steam, as a demonstration. This may or may or may not be good idea. An alternative is to use compressed air instead of steam, less problematic because air is dryer.

Another alternative would be to cycle the equipment mechanically by eg driving the engine at one or both of the flywheels. This is what is done with the Gartshore engines in Hamilton, with results that are reportedly quite satisfying for visitors. 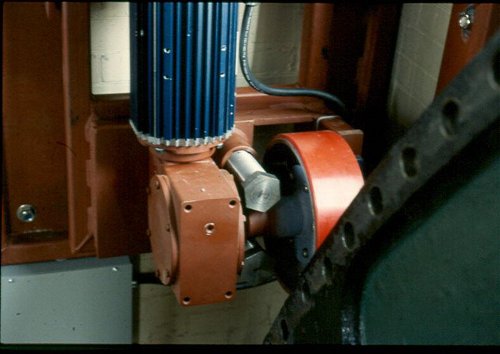 At the Hamilton Museum of Steam and Technology, a neoprene-clad friction wheel (red) runs on the surface of the flywheel at right, turning the flywheel and running the beam-engine 'backwards,' as it were.

However, the chief problem is that standing machinery of any sort is quite opaque and meaningless to most people. When a building undergoes conservation and adaptive reuse, one is left at the end of the process with a serviceable volume. Tenants or visitors can use the space quite happily even if they remain largely oblivious to the historic character of the structure.

By contrast, most industrial or agricultural equipment, apart from the buildings that house it, is of no present use except as a historic resource. (Well, not quite: the objects may be of aesthetic interest, and they may contain information for specialists, but by and large...).

Unlike the building, the industrial artifact must be explained if anyone is to get anything out of it at all. This necessitates the presence of informed interpreters to realize the full value of the resource.

Buffalo's waterworks engines and their building are large enough to be intrinsically interesting and to act as an out-of-town draw as well as a local resource for eg schools, and this means that there is the potential to pull in enough visitors to support a live interpretive program.

This, in turn, would help sustain conservation efforts and those long painful waits through the troughs of the business cycle that must be endured by so many cultural institutions. 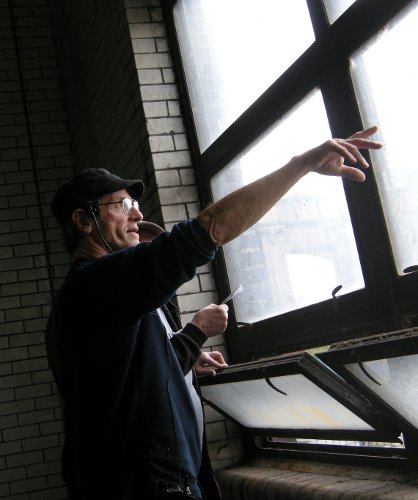 Buffalo's engines are also a natural for a promotional tie-in with Hamilton's earlier example at the Steam Museum, to develop cross-border touring to both sites.

During his remarks to the crowd, Buffalo Industrial Heritage Committee V.P. Jerry Malloy made favourable references to what Hamilton has done with its engines at the Museum of Steam and Tech, causing vague stirrings of pride in the breast of even this hardened sceptic.

Hopefully the stewards of both sites will remain alert to the possibilities for co-operation going forward.

As a footnote, we were surprised to find a TARDIS prototype discreetly tucked off to the side of the main walkway. 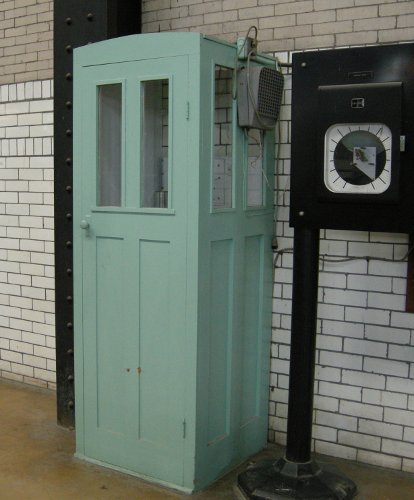 Although the current scholarly consensus is that Nikola Tesla was a Time Lord stranded in 19th century Terra, it is not widely known that he made efforts to reconstruct his ship.

Unfortunately, George Westinghouse withheld financial assistance, fearing that his principal scientific adviser would abandon the planet if successful. This apparatus was rescued during a warehouse clean out at the Niagara Falls power plant where Tesla proved the advantages of the AC motor, and is all that remains of his efforts to escape his tragic fate.

A movie is under development.

Very cool, I'd love to see this place.

Our Steam Museum is possibly the best museum in the city. I highly recommend a visit there. It is close to home, cheap to get in, and stunning. The interpreters there are also top notch. We are very lucky to have this restored gem!

I agree that we are lucky to have the Steam Museum in Hamilton, and interpreters who provide a fine tour. As a side benefit, the building itself is worth seeing, built of the two main Hamilton building stones. And it make a fine background for Murdoch's Mysteries!

Shawn is evidently one of Hamiltons many Dr. Who fans and he must have been surprised to find the tardis prototype. For more info on the Tardis check out this wikipedia link. http://en.wikipedia.org/wiki/TARDIS

Steam engines, especially large ones, should be run on lubed steam and only that. Compressed air or electric turning do not expand the cylinders or valve cages to thermal expansion design dimensions, and compressed air does not carry an atmosphere of steam oil like steam does. Running these engines on anything but steam would be highly inefficient and irresponsible and inevitably damaging to them.