Given the dissatisfaction with the folks at the Hall so frequently expressed on this site (yes, by this writer also), it may be useful to look at a case whose outcome was much happier all around.

Back in December 2010, the city presented a Public Information Centre at the Leander Boat Club in the North End. It was a very cold evening. The few who attended found the usual cheery junior staff person manning a sign-in table at the door, and in the hall beyond the usual display boards on easels and two or three staff/consultant team members standing by to answer questions.

The project was an extensive retrofit of the wastewater system with a set of real time controls - essentially, a program to modify the gates which regulate flows within the system to allow better use of the pipes themselves for storage purposes during storms. An additional Combined Sewer Overflow tank was to be built at Wellington and Burlington.

In the event of intense rainfall in the east end, for example, lighter loads in the west could be retained within the pipes and the CSO's rather than allowed to go immediately to the treatment facility.

The ultimate aim is to eliminate the need to dump untreated wastewater into the Bay. Interested readers can consult an article in Utility Infrastructure Management.

for the details, where they will find a paper co-authored by Chris Gainham and Patrick Delany. (For the short version, see Matt Van Dongen's Spectator article of Sept 11.)

Mr. Gainham was on hand and showed a readiness to explain this job and indeed the entire system to whatever level of detail you wished. An extensive series of poster boards provided much information on the then-current situation and the proposed changes in easily readable graphic form.

This was all fine, except that one of the panels seemed to show something very hard to believe.

The plan called for the electronics used to control the gates to be located above ground in a number of stark concrete block sheds.

Three of these were to be located within the North End neighbourhood: one at Wellington and Burlington, one at Ferguson and Ferrie, and one at the northeast corner of Mary and Ferrie - that is to say, on someone's front lawn.

At three by five metres, this would be a considerable encroachment, and an unsightly one too. 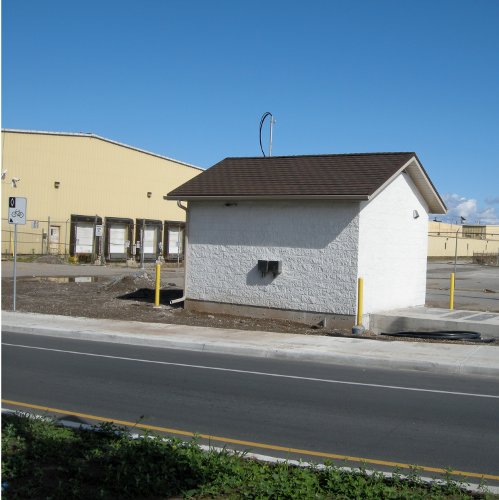 Concern was expressed. The Neighbourhood Association communicated with Councillor Farr and the Project Manager, and the Councillor convened a meeting attended by a number of residents, including the owners of the house meant to receive the unwelcome addition.

The project manager and the consultants (Stantec) looked at alternatives, and found that the house across the street was unoccupied and available for purchase, and this is what occurred.

There remained the problem of the ugliness of the proposed building, especially when inserted into a mostly red brick streetscape at a very prominent corner location. Councillor Farr called a second meeting, at which City staff and Stantec engineers presented a possible building design to residents.

This was rather sharply critiqued, particularly for its inappropriate scale. (A "Smurf house", one participant called it.) The desirability of adaptively re-using the existing dwelling on the site was raised, but this prospect seemed to alarm the Stantec people, and the issue was not pressed.

Staff went away promising to adjust their design to accommodate the general consensus of the meeting that it should be enlarged and the structure made to look "more like a real house" i.e. fit the surroundings better.

The result was built over the summer, and is, I think, quite good. Would it have been preferable to re-use the existing building? Yes, but there are a number of other examples of this brick cottage form in the neighbourhood, and the purely economic argument from conservation of resources and embedded energy lacks force at this scale.

(Although in this as in much else, practice makes perfect. If we are ever to have a culture of conservation, adaptive re-use must become the default option, which was not the case here. Also, losses can happen fast. Shortly after the house at Mary and Ferrie was demolished, fire destroyed another similar building at John and Picton. Two structures that had been part of the landscape for a hundred years vanished within a couple of months of each other.)

The real time control building erected on Ferrie is of fine brick and of a similar mass to the house that was removed. It does not in fact resemble a house in other respects- the shallow porch and glass block windows clearly signal that it is not a dwelling, but personally I find this to be a better approach: the facade invites inquiry without distressing the eye of the casual observer.

All in all, this structure is a good companion to an earlier house-form utilities building that still stands a few blocks away, and it makes a nice addition to the architectural interest of an already extremely varied neighbourhood.

Every vernacular facade treatment ever marketed is on display in the North End, from red brick and proper stucco to the new and destructive styrofoam version, from insulbrick to angel stone and vinyl siding and more. 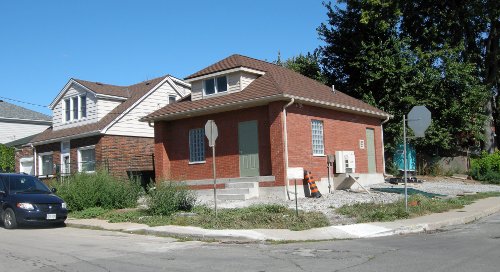 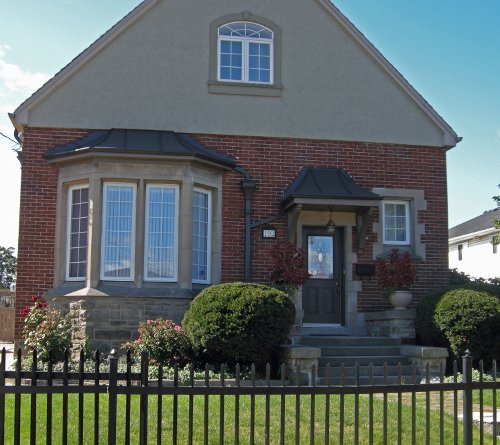 So what went right here?

Some things are obvious. There was an active and vigilant neighbourhood association, with enough manpower to do the leafleting and mailing required when an issue like this comes up. There was a responsive councillor and a very responsive project manager.

Some things are less clear. There must have been a good contingency allowance in the budget of course, but more importantly, it was readily available to the project designers, because changes were made quite rapidly by City standards.

Somehow the original plan for two structures on Ferrie was altered so that only one was required. Presumably savings resulting from the conflation of the two control stations partially offset the cost of upgrading one of them from concrete shack to brick story-and-a-half.

There was still an extra expense owing to the re-design, but we are told that it was small in proportion to the multi-million dollar cost of the entire project.

I would like to think that what this episode suggests is that working for improvement at the neighbourhood scale may be more effective than taking on larger issues where a greater number of competing interests are involved, but this is making a lot of a single case.

However, it may be worth considering if, for example, an attempt to win recognition for the fact that Cannon is a residential street in the downtown, and should be treated accordingly by transportation planners, could be more fruitful than attempting to engage on traffic issues at the city-wide level, with all the inter-generational disagreement and class resentment that then comes into play.

In any case, it is safe to say that if you think that the Big Fixes (latest iteration: hotel plus casino) are always going to cost us more than they benefit us, and that steady incremental improvements in the neighbourhoods - all neighbourhoods - are better value for the money, then organization at the neighbourhood level is crucial to bringing attention to problems and opportunities in the first place.

And after all, once the master plans have forestalled massive flooding with sewage or motor vehicle traffic, it is the fine-grain structure that contributes most to the livability of a place.

IMHO, this is why any successful push for two-way on Cannon would do well to start with the eastern, most residentially dense half.

Very cool. Sad to see the house go but good to see a reasonable replacement. I love those hydro buildings spread around the city - they blend in so well you really have to work to see them!

Although, there are also residents on Cannon whose livelihoods depend on the ability to drive and park trucks in the neighbourhood. Bringing much needed commerce into and out of the city, people who own transport trucks, delivery, and towing also contribute to the economy.These people are important, too, as are their right to a livelihood and the choice to do what they choose with their residential lots.