Hamilton's light rail transit (LRT) planning team has completed a proposal for locating a maintenance and storage facility (MSF) as part of the 2012 work plan. According to the staff report that will be presented to the General Issues Committee on Monday, August 13, staff recommend locating the LRT vehicle maintenance yard at 330 Wentworth Street North.

A partially split spur line connecting the B-Line LRT route on King Street to the maintenance yard would run in mixed traffic along Sanford Avenue, Barton Street and Birch Avenue. 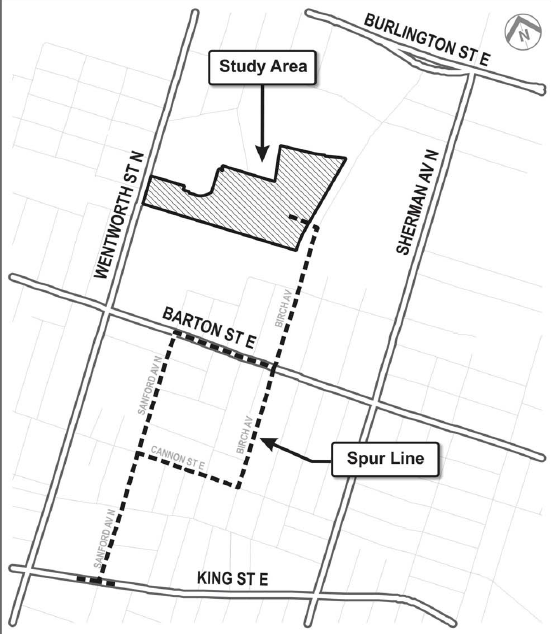 The report notes that the proposed routing "provides aesthetic improvements to the neighbourhood by burying the existing hydro lines within the hydro corridor; uses roads which have excess capacity available; and provides a high level of protected outbound LRV [Light Rail Vehicle] lanes."

The maintenance facility is required under Hamilton's plan to build the east-west B-Line LRT and a proposed north-south A-Line LRT. It will be used for "full administration, storage, cleaning, maintenance, overhaul and support services for the LRT system." This is also the lowest-cost option.

Potential sites under consideration included Stuart Street and Frid Street. They were rejected as a maintenance yard would be incompatible with the secondary plans for those locations - Setting Sail and West Hamilton Innovation District, respectively.

The proposed Wentworth Street location, which the city already owns, has historically been used as a maintenance yard and can accommodate 40-45 LRT vehicles, enough to service both the B-Line and the A-Line.

Staff note that its distance from the LRT line is farther than ideal and the spur line runs through a residential neighbourhood, but the other potential sites are equally distant and are not under city ownership.

The cost to build the facility, which is required for Hamilton's LRT plan, has been estimated at $73 million. The site will need to undergo a public consultation and Class Environmental Assessment if Council gives it the go-ahead.

In addition to locating a maintenance facility and conducting an environmental assessment, the 2012 LRT work plan includes a phasing study to determine the most cost-effective construction plan (all at once or in phases), a firm capital and operating cost determination, and a cost-benefit analysis on not building LRT.

The Metrolinx King-Main Rapid Transit Benefits Case Analysis published in February 2010 determined that a phased LRT (with projected opening years of 2015 and 2030) would have a lower initial cost but would also have lower economic development potential.

Metrolinx also requires the completion of a value-for-money (VFM) exercise on Hamilton's LRT plan to determine the best method of project procurement. Infrastructure Ontario will lead that exercise in cooperation with Metrolinx and the City.

Hamilton's B-Line LRT was identified in the 25-year Regional Transportation Plan as one of the top priority projects to be completed in the first ten yeas of the plan. However, Metrolinx has said that it will not make a funding decision on Hamilton's LRT plan until after it completes an investment strategy for regional transportation planning, due in June 2013.

Would it not make more sense to have the A-line turn east at James and Barton? Hamilton General Hospital is a much more sensible location for a stop than James and Burlington Streets. Removing the Barton-Burlington stretch of the A-line and the Birch/Sanford spur would save all the money that would be needed for the James-Wentworth stretch along Barton.

James and Burlingotn serves the waterfront, but I still like the idea of the spur going along Barton, past the General to the Maintenance facility.

But, the B-Line would be built first.

This is pretty fascinating stuff. Considering that with everything that had been tossed around previously, the location of the yard was a head-scratcher.

Ironically, this is getting quite reminiscent of Mahesh's 'double figure-8' layout for LRT...which included a 'Hamilton Grand Central' at the Siemens facility.

Yes, I know I mentioned this months ago, and promised that it would be viewable 'soon'...but clearly, 'soon' has different connotations in certain circles.

Any chance they could lump this in with relocation of the CN rail.