Over these eight tracks, the boys stay true to the mythical spirit of rock: simple, loud, yet unforgettable songs that glamourize the vitality of youth.

This summer has been a roaster. The unrelenting heat that has gripped Hamilton for the past weeks is making asphalt gooey, turning gardens into deserts, and you could probably cook a whole chicken in your backyard at high noon without even sparking up the grill.

Relief comes intermittently from air conditioned shops, pools and splash pads, but these options only let us cope with the heat, not banish it.

We finally get a breather hours after the sun bids us a bonsoir, and maybe it's this relationship with the night that is responsible for all the sentimentality surrounding summer's good times. 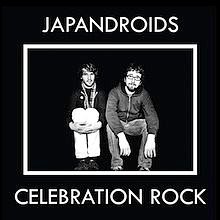 It's also the departure point for the Vancouver duo Japandrois on their sophomore album Celebration Rock, released just on the cusp of our Canadian summer and now shortlisted for the Polaris Prize.

If you listen to rock radio, you've already heard the fantastic lead single "The House that Heaven Built", and if you're an avowed Canadian music lover it's very likely you're already a Japandroids fan and have been spinning Celebration Rock for the past month.

But if you have somehow missed it, please abide by my less than subtle proselytization: Celebration Rock is the best rock album you will listen to this year, and if you haven't heard it already, go out and buy it. Now.

Beginning and ending with a crescendo of fireworks--a sound of summertime nights if there ever was one--at 35 minutes, this disc is not only easily digestible, but archetypal. Brian King (guitars, vocals) and David Prowse (drums, vocals) tap directly tap into the spirit of rock right off the bat, and don't let go until their final, triumphant flourishes.

The opening track, "The Night of Wine and Roses" has them returning to their instruments while "still drinking...and smoking", and ready to "Yell like hell to the heavens."

Over these eight tracks, the boys stay true to the mythical spirit of rock: simple, loud, yet unforgettable songs that glamourize the vitality of youth and are nostalgic for "that night you were already in bed/said 'fuck it' got up to drink with me instead".

A bluesy and raucous cover of The Gun Club's "For the Love of Ivy" is a jaw-dropping experience that sounds like the band channeling fellow Vancouver guitar-and-drums duo The Pack A.D., and must be a sight to behold when performed live.

As it stands, Japandroids are well known for their spirited and high-powered live performances, so be jealous of the European audiences who get to enjoy them on tour this summer--they won't be performing in North America again until the fall.

If you're like me, until then you'll have Celebration Rock on repeat, marveling at the glory of the disc's last track "Continuous Thunder" (which perhaps alludes more to the summer Vancouver's been having than ours).

Here, our rock heroes stand with their arm and arm with their girls, "through the cold, pissing rain/dressed to the nines...singing out loud (ya ya ya ya)/like continuous thunder."

And as the fireworks fade out and the disc restarts, you might find yourself smiling and affirming the ageless oath, "Rock on, boys!"

sounds like all the high school cafes in 80s.