A demolition permit has been issued for the building, and McMaster has no plans to incorporate any part of this structure into their new development on the site. 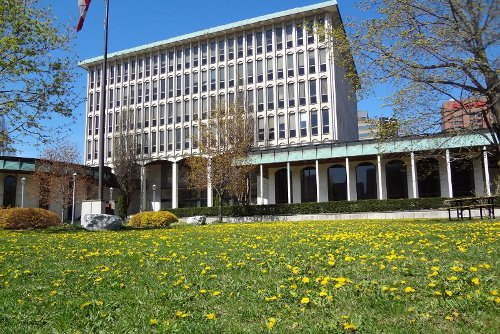 A demolition permit has been issued for the building as a condition of sale between the Hamilton Wentworth District School Board and McMaster University. McMaster has no plans to incorporate any part of this structure into their new development on this site.

The Heritage Canada Foundation explains why the building matters:

Thought to be Hamilton architect Joseph Singer's signature work, this elegant modernist 8-storey building partly clad in white marble with elongated arched windows and library in the round is considered by many as the city's best example of mid-century Modern architecture. Opened in 1967, the Education Centre was built as a monument to public education and is located opposite City Hall on prominent Civic Square land donated by the City as a way to convince the Board to remain downtown. Keeping the building from landfill preserves an important piece of Hamilton's history, respects the civic component of the site, and makes ecological and environmental sense.

You can read the Heritage Canada Foundation's listing for 100 Main, as part of the full list of endangered sites.

Here's a list of contacts with McMaster, The School Board, MPP's and the Minister of Culture. Please send them a note to tell them what you think of the plan to demolish this building:

Jelly is a local artist, graphic designer and map maker living in Downtown Hamilton, Ontario in the Central Neighbourhood. Matt is an advocate for built heritage, toxic waste eradication and the revitalization of downtown Hamilton. www.mattjelly.com

Work with it instead of destroying it.

Mirrors into our past

demolition permit submission and approval as reported by Joey Coleman

A Top 10 is media-friendly but it does nothing to aid the preservation of #11 onward. Heritage Canada Foundation should consider doing a long list. If the Polaris Prize can garner attention with its driftnet of largely decaf alternative adult contemporary albums, surely some good would come of a similar roster of imperilled architectural lovelies.

Leave it to Architecture Hamilton and you'll be stuck in 2008, with its attendant cause du jour.

BTW, are we in the clear on #10, or is the Beach Canal Lighthouse going the way of the incandescent light bulb?

Not to mention that there might have been room for concern when the first iteration of this deal was announced four years ago.

Too bad Heritage Canada didn't put the Cannon St Cotten Mills on the endangered list. It would have been just deserts for the Board of Ed.

Too little, too late. Still don't understand the appeal of this building.

Institutions that understand (or care about) city building in Hamilton - definitely should be on the endangered list.

As long as the new development's sun and shadow analysis satisfies the Downtown Hamilton Secondary Plan this shouldn't be a problem right?

By way of explanation, http://www.thespec.com/news/local/article/682013--omb-gives-all-saints-green-light-to-demolish-downtown-hamilton-church

My feelings on tearing this building down aside, (Not for it) I feel it is somewhat depressing when such an uninspiring piece of pastiche and quickly dated architecture built in 1967, as an oddball conglomerate of dropped ceilings, round walls and fluorescent lighting is considered an important part of our national heritage.

Have you been inside it? Don't knock it 'til you have. It's a beauty. You can't fully appreciate it from the vantage point most people see it from - whipping past it on Main at 60k.

I'll miss Toronto's Bata office more.
Hope that Mac's new venture here will be as impressive as the Aga Khan's there.

This HCF is somthing els .. why only when someone buys a place after spending Millions on and now they get this from HCF.. i say once bouth to bad so sad get over it ... the building thats going up its gonna be sweet .. unlick the one is there now .. hiden in the back ... jjuuste tell me once when you drive east on main street do you see that building NOTTTTTT .. if your seriousely teling you see it all the time you drive by that place your not looking were your driving

Oh and tell me one more thibng ... i have never been in it and im sure 99%on Hamilton havent eiter im sure they have nice rooms in there but get over it ... if the Board like it so much why are they not bring some of the stuff to there new place on the mountain

They're emptying out the building now. 2 large moving trucks parked on the grass this evening and lots of furniture being moved out.

Obviously there's some trolls getting carried away with the upvote/downvote buttons lately. I just ignore the votes generally, at this point the only real use is that established trolls get pushed out of sight.

Maybe it's more about people down voting items being moved out of the Board building than your comment specifically.

Maybe it's more about DIH gloating about the demolition in an earlier comment.

Can you show me where I gloated? Would love to see it. I am personally not a fan of that building and won't be sad to see it gone, but don't remember gloating about it.

Matt Jelly is still hook on this poor biulding ... GET OVER IT look to the future and move on stuck in the 80 is not going to move this city forward

Say thank you you for your low-down which helped me in significant more wide Payday Loans Online - Get Instant Loan Approval.