I've never seen a neighbourhood emerge from the ether, but the Pan Am Games facility at Front and Cherry is shaping up to be a most memorable delivery.

It's a wonderful thing to witness a birth. To count the fingers and toes, hear the first cry, feel the baby's breath on your cheek...It's alive!

One of the best things about a new arrival is the anticipation: What will it look like? Will it be a boy or a girl? What will they do when they grow up? What kind of future will they face?

There's a new delivery currently pushing its way through just down the road from me. It's not a baby but it is a living, breathing thing.

I have never seen a neighbourhood emerge from the ether, but this is exactly what is happening at the West Don Lands in Toronto. The Pan Am Games facility at Front and Cherry is shaping up to be a most memorable delivery.

Right now it's just rubble, a gleam in the eye. Some features are already visible, though: The Bayview loop at the bottom is now paved and a couple of condo towers are underway. And the kids' park, tucked away below the Richmond Street overpass, has been officially declared 'open'.

But for the most part, the main attributes of the new arrival - the streets and houses, shops and parks, people and plazas - are not quite visible on the architectural ultrasound. 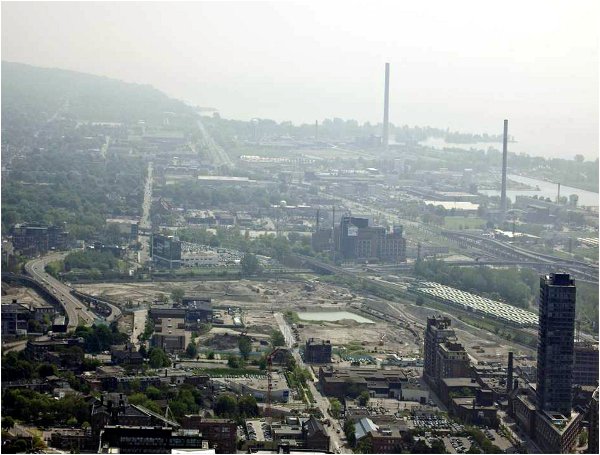 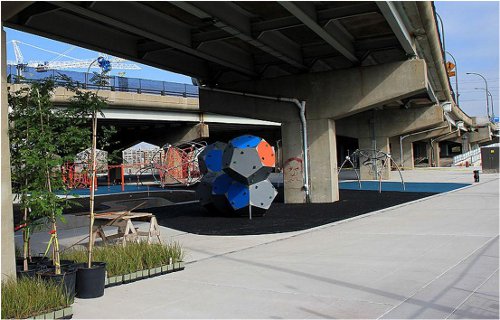 My wife and I have been keeping a close eye on the neighbourhood-to-be. We live a 5 minute walk away and make frequent trips to the site. We've even considered investing in a condo - the plans are certainly enticing. 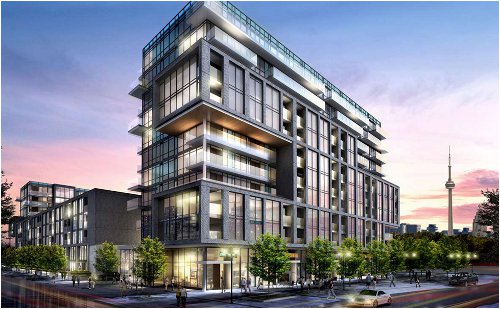 In a nutshell, the design envisages a mixed housing community for the athletes of the 2015 Games, which will then be sold off to the public. Housing stock will include both market rate and geared to income units. Various options will be available, from 1 bedroom condos to floor level 'virtual townhomes'. 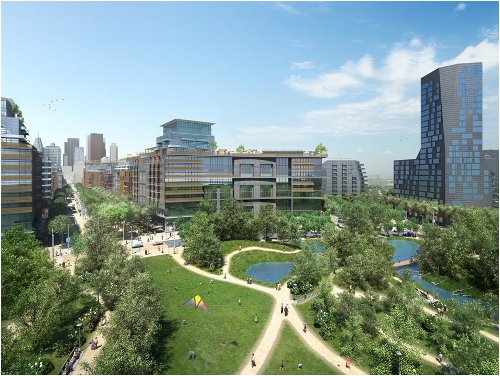 A signature park will anchor the site, which links to developments along the Keatings channel - where the Don River meets Lake Ontario. And history will be preserved. The impressively structured 1859 former Palace Street School, better known locally as the Canary Diner, will be retro-fitted for some yet to be determined purpose.

This building is intriguingly located at the gateway to the neighbourhood - at Front and Cherry - tempting folks to christen the area, 'The Canary District'. That's a nice name. 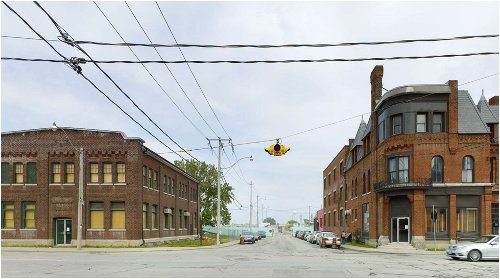 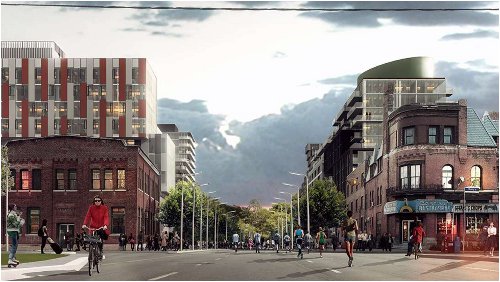 When my wife and I pored over the street plans provided by the River City condo developers they included acres of green spaces, inter-linked with the Don Valley trail as well as pretzel shaped streetcar tracks, winding their way through the district (although, we were cautioned, that transit service is yet to be determined, ' You might have to catch a bus').

As the Canary District moves out of the embryonic stages and takes on a more recognizable shape there appears to be plenty of reasons to believe that this will be a healthy and handsome new addition to Toronto's neighbourhood population.

I've looked at the plans as well and it does look fantastic. And what a great entrance! Canary District here I come!

And THATS how you do city building with Pan Am investment.

Well it's easy to do when you are getting as much financial leverage as Toronto is. Unless something has changed, I beleive Toronto is putting in $94 million (including facilities) and is getting about $550 million back from higher levels of government the bulk of which is in the athletes village. That is almost 6 to 1 ratio.

The best Hamilton got is 2 to 1 and that was only on facilities themselves.

I'm glad TO is doing something worthwhile & I look forward to seeing Ticat games at the new stadium but who's kidding who- the Pan Am games were an excuse to line the pockets of Toronto Developers & the Ticats with taxpayer dollars.

Wow...Ben Bull twice in one week??

Sure Ben, rub it in... rub in the fact that your city is seeing an incredible urban revitalization take place thanks to Pan Am money, while we get a parking lot and stadium.
I too have been following the West Don Lands plans and am thoroughly impressed. We literally need to transplant that plan into downtown Hamilton...... of course, it would get help up at the OMB for a decade......

I corrected it for you Jason

Sure Ben, rub it in... rub in the fact that your city is seeing an incredible Ontario taxpayer subsidized urban revitalization take place thanks to government handouts disguised as Pan Am money.

I know twice in one article but can you tell I green with envy here? The problem was no other city got a similar deal. I may be wrong but I beleive we were only to receive "facilities" money and nothing else.

You're absolutely right, BUT we had the opportunity to open up a huge swath of urban land for revitalization, and even had private sector condo builders publicly speaking out on their desire to build there...we could have leveraged our public funds, but instead gave it all to one guy.

It is named after the Canary Diner, a well known "greasy spoon" in the area. which is the building on the right hand side of the picture.

I kind of like the idea- any takers for renaming Mt Hope the "Egg & I district"?

The third photo is actually the Canary District Condominium. It will be located on Front Street just east of the Canary restaurant building.

It does look nice. That area has been so neglected for such a long time.

Hopefully condo developers like those who begat CityPlace don't crash the party and spike the punchbowl.