Welcome to Hamilton. (You are being watched.)

View Matt Jelly's new short film, Welcome to Hamilton. (You are being watched.). 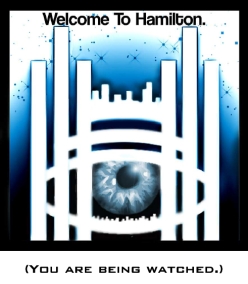 Welcome to Hamilton. (You are being watched.)

Welcome to Hamilton. (You are being watched.) is a new short film written and directed by emerging activist video artist Matt Jelly. This ten minute video takes a critical look at the specific application of public closed-circuit video surveillance in downtown Hamilton, Ontario.

It both answers and asks several important questions about this pilot project, and any future expansions which may be planned: Were public consultations conducted properly? Are these cameras truly effective in achieving their stated objectives? Does this type of surveillance have a negative impact on a community’s image? Is this behaviour the symptom of an emerging global erosion of social trust and civil liberties? Do surveillance cameras actually work in the deterrence of crime, or merely displace it to another street or neighbourhood?

Posing these questions within the context of the increasing global debate of public surveillance, interviews include two Hamilton city councillors, Terry Whitehead and Bernie Morelli, and Dr. Henry Giroux, an internationally renowned author of 40 books and the Global Television Network Chair in Communications in the Faculty of Humanities at McMaster University.

Running time: 10 Minutes. Hand Made in Canada by Robots.

Jelly is a local artist, graphic designer and map maker living in Downtown Hamilton, Ontario in the Central Neighbourhood. Matt is an advocate for built heritage, toxic waste eradication and the revitalization of downtown Hamilton. www.mattjelly.com