In Memory of All Saints

All Saints Church may not be with us (in its present form) much longer. This article offers some documentation of its state in 2012.

This article provides photographs of All Saints Church, and of two other churches with similar masonry: Carisma (Church of St Thomas) and the Hughson Street Baptist Church. All three buildings were among the earliest constructed in Hamilton, using Eramosa dolomite rather than Whirlpool sandstone.

All Saints Church may not be with us (in its present form) much longer. In view of the diminished congregation (some 60-70 attended each Sunday) and the need for expensive renovations, the decision to demolish the church seems inevitable.

The parishioners are making serious efforts to preserve some aspects of its heritage. This article offers some documentation, however inadequate, of its state in 2012.

The Church (15 Queen Street at King West) was built in 1872-1873 (Henley, 1994, p.36), and enlarged in 1909. It was consecrated in 1880, after several years of use as a "Chapel of Ease." The stone is mostly Eramosa dolomite, similar to that of the Church of the Ascension Hall. Whirlpool sandstone was used for the sills, lintels, and probably also the carved voussoirs above the Gothic windows.

The stones in the walls are very variable in size and quality, some show considerable crinoid debris and may be from the local Gasport, and others are oriented with the bedding vertical. A few include some chert. A few blocks of Whirlpool, some in vertical orientation were also included.

The eastern addition built in 1909, includes large lintels or voussoirs of white limestone, probably Indiana limestone, many of which have developed cracks. The bell tower was damaged in an earthquake in 1998, and was taken down the following year.

The entrance where the tower was located has brick voussoirs, and inferior stone work. For a postcard showing the appearance of the church before the tower came down see Henley. 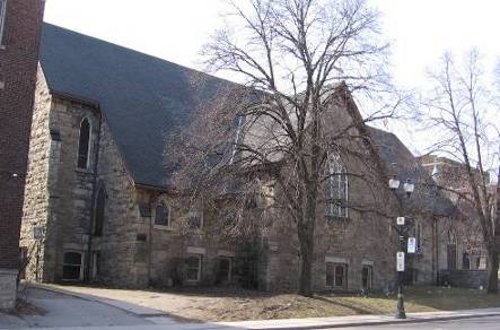 Figure 1: All Saints Church, the north side (on King Street) 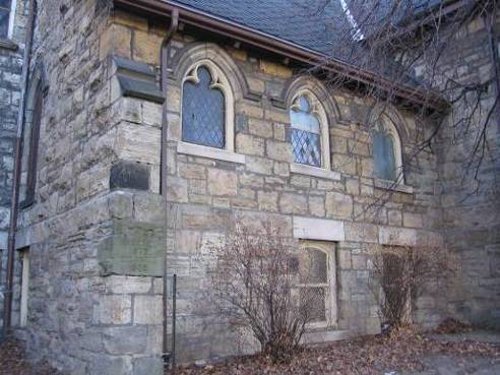 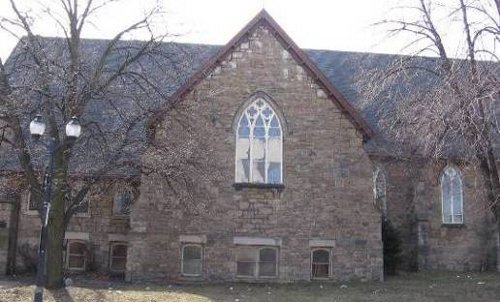 Figure 3: The central, north wing of the Church. 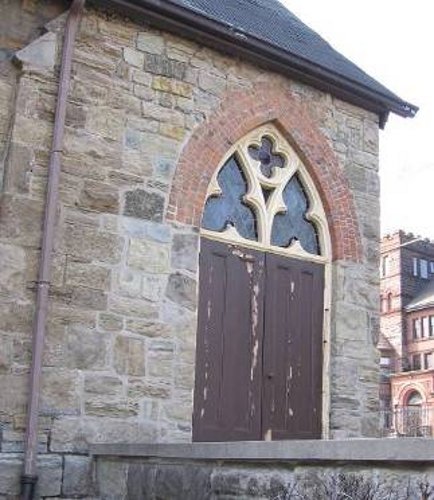 Figure 4: The doorway at the northwest corner, which was constructed after the tower was removed in 1998. Brick was used in place of stone voussoirs, and the repaired masonry shows inferior workmanship. 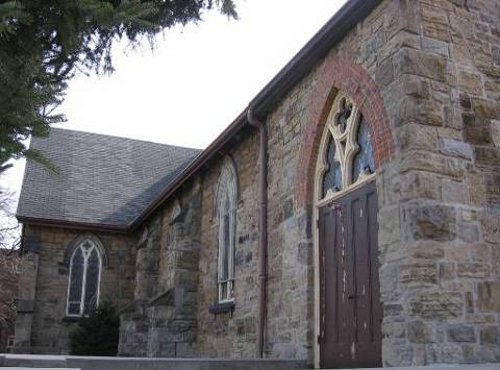 Figure 5: Another view looking east from the northwest corner. 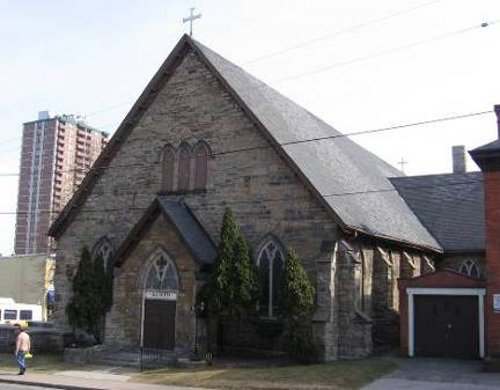 Figure 6: The west side 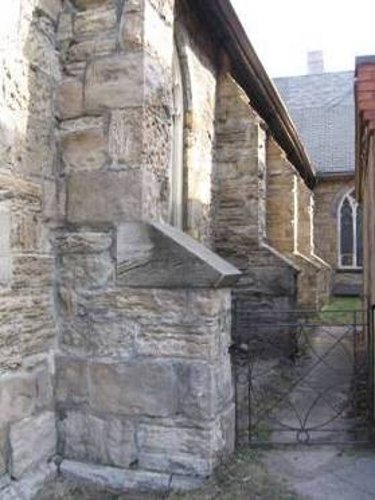 Figure 7: the south side, with a row of buttresses. 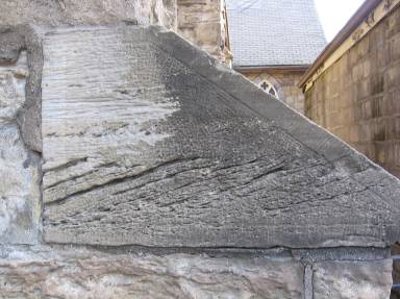 Figure 8: Detail of a buttress, showing cross-bedding in the Whirlpool sandstone cap 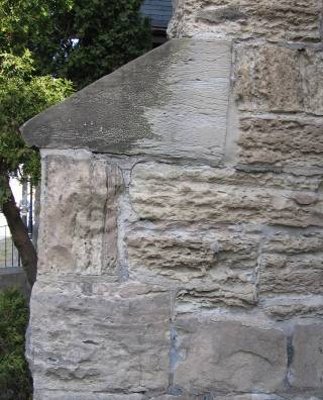 Figure 9: Detail of another buttress: below the cap are two blocks of Eramosa dolomite, on the right the bedding is horizontal, on the left it is vertical. 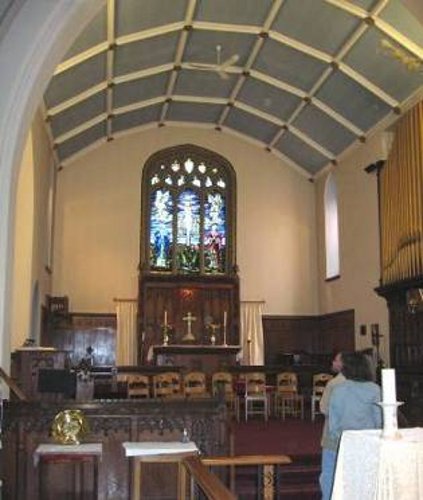 Figure 10: The interior of All Saints

Carisma Church, 280 Main St East, (originally the Anglican Church of St. Thomas) was designed by Albert H. Hills in the Gothic Revival style and built in 1869-1870 of Eramosa dolomite, with a Whirlpool sandstone trim.

The attached building (built as a Sunday School, 16 West Avenue South), was added in 1874 and is very similar. The brick rectory just south of the church was built at about the same time. The tower was added in 1883, and the chancel extended in 1908 (Hamilton's Heritage, v.5, p.148).

The design and stone masonry are very similar to that of the All Saints Church. The main door has two small red granite pillars. 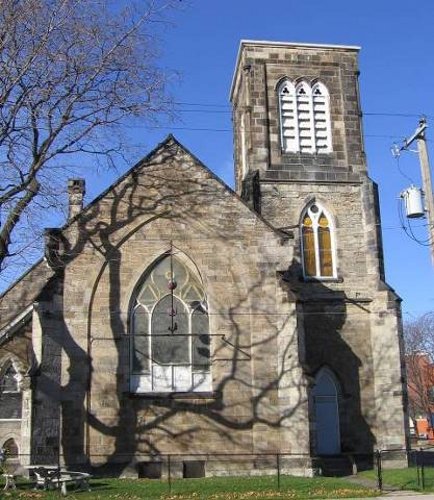 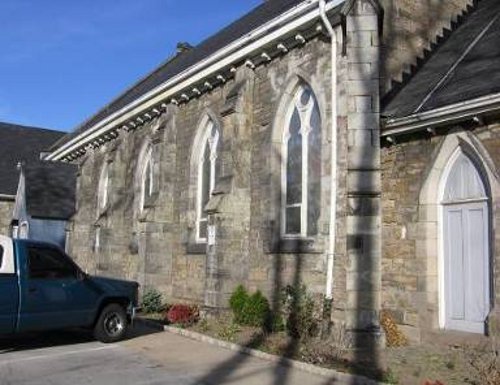 Hughson Street Baptist Church, 375-385 Hughson St North. According to Manson (2006, p.51), the congregation, which had been meeting since 1887 in a frame building, purchased the Hughson Street School for $2,100, and renovated for use as a church.

It is a relatively small building constructed from Eramosa dolomite and Whirlpool sandstone: the masonry is very similar to that in All Saints or Carisma.

The Church of Saint Thomas, therefore, was built some five years earlier than All Saints, and both probably at about the same time as the Hughson Street School, which became the Baptist Church. 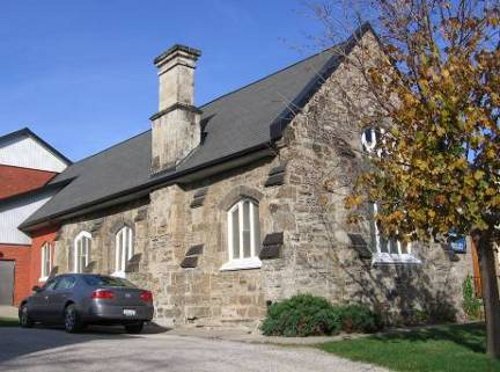 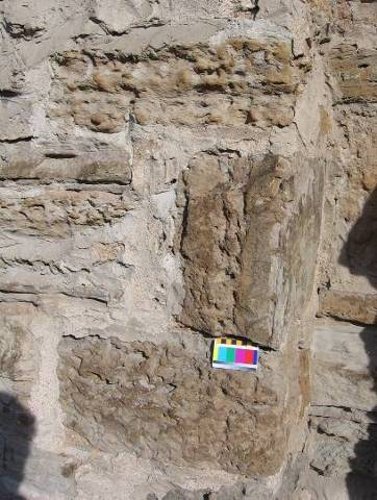 These three buildings show resemblances in design and masonry. They were among the first significant buildings to be constructed mainly of Eramosa dolomite, rather than the sandstone favoured for earlier buildings.

...a retired professor of geology...his field of specialization being sedimentary rocks.

Geo-logically speaking from a gardening perspective, I much prefer igneous to sedimentary for the soil restorative properties. However, many large blocks of sedimentary stone may be salvaged from the All Saints demolition and used to construct raised beds in community gardens throughout the city as these will be far superior to wood frame plots. Decaying wood has a negative short-term impact on soil fertility which harbors fungus, slugs, mold and mildew just to name a few.

Igneous or parent rocks as I like to call them, contain the full spectrum of minerals originally spread out upon this planet to help foster the spirit of life. Sedimentary stones on the other hand contain very few trace minerals or rare earth elements essential to plant/animal nutrition and good health. Sedimentary stone has already gone through the life process and the essential minerals have been extracted by ancient living things. Their afterlife and waste products ultimately ended up in, and as, the sediment itself and eventually washed out to sea.

A good source of highly nutritional, mineral packed soil amending material is, however ironic, found in glacial gravel and river bed sediment. Glacial moraine deposited since the last ice age is prevalent in many Ontario quarries and should not to be confused with sedimentary limestone which is used in agriculture primarily to alter pH levels in artificially fertilized/acidified soil. Glacial gravel contains granite, gneiss, porphyry and many other original forms of parent rock although both are used in the manufacture of concrete and asphalt. Parent rock is a natural fertilizer and the difference between the two materials is easily recognized: glacial gravel is generally tan/brown in color whereas limestone is white/gray.

...the decision to demolish the church seems inevitable...The parishioners are making serious efforts to preserve some aspects of its heritage...of its state in 2012.

All Saints may not be with us (in its present form) much longer. Yeah, IT is just another older church that has seen better days, although the cornerstone of which IT was hewn could become bolder if reused in practical and such spiritual ways!

Thanks for sharing the memories.

Yes, my wife agrees with you that igneous or metamorphic rocks make the best decorative rocks. It is a tribute to her other qualities that our marriage has lasted more than 50 years. Another geologist (who did work with "hard rocks") was instructed by his wife (a keen gardener) to bring back attractive "gardenite" from his excursions into the Canadian Shield.

Just remember that 75% of the continents, and almost all of the ocean bottoms are covered by sedimentary rocks. Sediments supply most of the energy we now use (petroleum, coal). Some sedimentary rocks make good building stones just because they lack easily weathered minerals. Others (gypsum, phosphates) make good fertilizers.

I'm no longer well received here in the razed hammer Gerry so I refrain from commenting accordingly, but I like rocks and enjoy reading your articles about them, their history and storied usage here in Hamilton.

I especially like smooth weathered rocks and yes I used to place them in my gardens for looks. I don't do that too much anymore however. Now I heat them to a cherry red color in my woodstove then quench them in cool water to cause fracture. Raising my hammer, I then proceed to smash them into a fine dusty powder.

You see Gerry, the microorganisms in the soil which are crucial to unlocking the essential minerals in rock stand a better chance of doing so when there is more surface area to attack. A rock the size of ones fist only has about 1/4 square foot of surface area exposed when at rest in the topsoil. But when that rock has been smashed into a fine dust and sprinkled on the earth, there are many acres of fresh surface area for a micro/macro-organism feast and the precious minerals will much more sooner be released.

We have been poisoning our soil for over a hundred and fifty years with the ill advised use of NPK fertilizers which are dangerous to plants and animal feeders. This is the root cause of most of our industrial diseases and agricultural rot. I could write a book about this subject but I'd much rather not. IT would be better if anyone is an interested learner, to visit me at the Gage Park Community Garden this summer. I'm happy to announce that I have been blessed this year as one of their many good gardeners.