If the under-used block at Main St. and Bay St. is developed properly, it could be a very successful anchor on the west side.

Am I ever excited!

Hamilton Motor Products is moving its car dealership out of downtown to a new location near the corner of Wasteland and Nowhere Streets - otherwise known as Highway 20 and 53 - one of the low density, sprawling, car dependent suburbs on Hamilton's fringes. A suitable location, considering the amount of time these residents spend in their vehicles.

But this isn't why I'm excited.

I'm excited because of the huge swath of underused and vacant prime land that is available for development in downtown. If this is developed properly, it could be a very successful anchor on the west side. The block of land is bordered by Bay Street on the east, King and Main and Hess on the west. 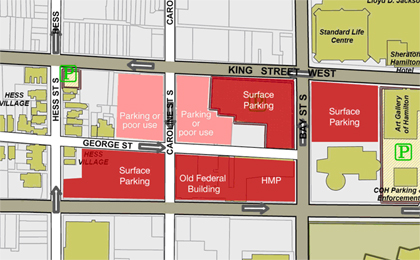 The block bordered by Main St., Bay St., King St., and Hess St. has plenty of room for improvement (click on the picture for an enlarged copy)

A coordinated effort will have to take place between the different land owners to prevent isolated buildings that resemble big box stores or suburban office parks. Mixed-use, high density building structures that compliment each other are ideal.

Hamilton's first effort at this is the Terminal Towers block built in 1966. The block now known as Effort Square, is Hamilton's largest building. It consists of an eight-storey hotel, a ten-storey office tower, and a twelve-storey apartment tower mounted on a five-storey base of retail: a mixed-use complex. This type of structure - with mixed uses and high density - supports each other and the surrounding downtown. 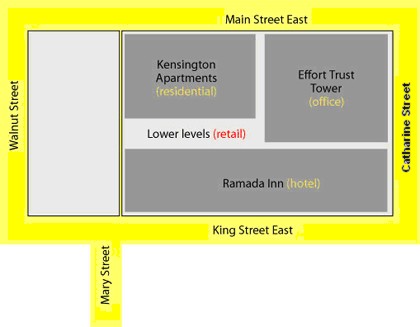 Although I feel there are many things wrong with the structure, I also think it does a lot of things correct, and provides an effective case study in what works and what doesn't. 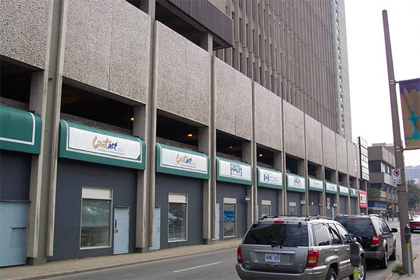 First of all, the Catharine Street side is closed to pedestrians. It would function better if it opened to the street in a more inviting manner.

The design is cold as well, like a Communist era building, but inside the retail concourse still looks bright and airy and surprisingly pleasant.

Presumably, the planners thought the structure would be almost self-sufficient, with a balanced "food chain" of residential units supporting the retail, retail using business services in the offices, the offices providing places of employment for the residences, the hotel providing new patrons for the retail, and the entire building providing amenities for the hotel guests.

Effort Square has seen better days, but it continues to still function nicely. With a few renovations I think it could be better integrated into the downtown. 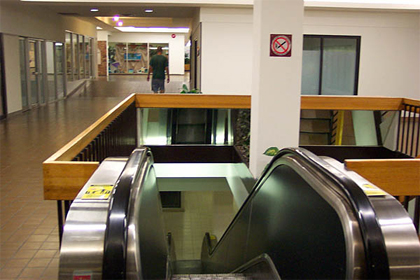 Effort Square has seen better days, but the interior is still bright and airy

I think we can learn from the Effort Square and Jackson Square complexes when it comes to redeveloping another large area of land in the downtown. Granted, an intact six-storey streetwall with mixed-uses and walkable destinations, unbroken by surface parking lots, locally owned by landlords who aren't tied to ridiculous by-laws that limit use, times of operation, parking requirements, etc would be ideal.

Unfortunately, a streetwall hasn't been built for 75 years. The current trend is to build muli-use, multi-function, high-density structures that incorporate into the urban fabric, streetlife and transit system.

Cities like Toronto, Portland, and Montreal have good examples of mixed-uses. Montreal, due to its very cold winters, is built underground as much as above ground. The entire downtown is connected by an underground network of retail, offices, metro system, and even entire condominiums that stretch downwards like underground skyscrapers.

Portland has an extensive network of streetcars that provide efficient transit and results in a very healthy, safe, and pleasant streetlife. The transit is so efficient that people choose it over a car.

Toronto finished the 1970s with the largest office complexes in the country dominating the Central Business District (CBD). These very large buildings provided only one use with some retail that was supported by daytime workers. However, the streets were vacated after 6:00 PM in the CBD.

The last 15 years has seen the area filled in with as many residential towers, which now provide a 24-hour city in the CBD. The office buildings and their lower levels have lended themselves to more retail, restaurants and and the growing "underground city", similar to Montreal.

It is clearly a live-work-play area now, much improved from the 1970s. The mixed architectural styles of post-modern condos with modern-styled office buildings is softening the boxiness of the CBD and providing a nice variety enhancing the city's image.

There's a new vision of urban living sweeping the nation: dynamic, energetic places where the work is mixed with living. Neighborhoods with retail shops, cafes and restaurants are surrounded by attractive streetscapes, creating places for people to interact and socialize after work. This may be a throwback to the old European city, where the butcher and cobbler had shops at street level below living quarters, but it is also part of a hopeful trend toward sustainable development and revitalized modern cities.

For the builders and investors, the mixed-use building is the "diversified portfolio". Rental, condo, office and retail units often have different economic cycles, thus spreading the risk. As well, phasing in different portions of the structure allows for parts of the building to be under construction while other areas may already be providing income.

Building up also provides a profitable economy of scale. It is more costly to build thickened horizontal support than a tighter grid of columns.

For pedestrians and the city itself, it is more efficient to get around by walking where the footprint of the building is smaller. The new federal building in Hamilton is an example of a building with too large a footprint for its height. It is reminiscent of the suburban office parks along the QEW, where spend half your lunch hour driving to and from the single-use food court complex at Waker's Line and Mainway.

Mixed-use also provides more security for both the building and tenants, patrons and residents by creating a round-the-clock flow of people. Leaving the office late at night is less harardous when residents are coming and going as well.

The latest sprawl development is always marketed as living on the "edge of nature" - until it is sold out then the next phase is developed. Suburban living actually has none of the amenities of country living promised by developers, and non of the amenities of city living. 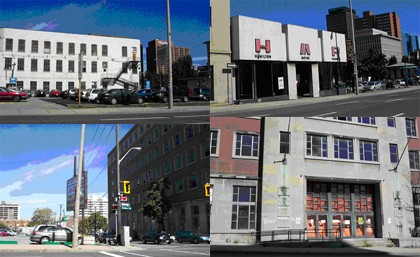 I have a suggestion for the lands bordered by Main, King, Hess and Bay.

On the southwest at Hess between George and Main, build a twin-tower residential building on top of retail space, housing, drug stores, grocery and larger square footage establishments, and above them boutique specialty stores, gifts, bakeries, a hardware store, and so on.

The Federal building is planned to be made into lofts - a good use - but I hope the George Street side is fronted at the street level. George Street could be a terrific stretch, connecting Hess Village and the CBD. It's a fantastic narrow street perfect for pedestrians and patios - not just pubs but a mixture of establishments. The Hess Village pub concentration has created its own problems, a good example of why clustering single-use is bad.

For the HMP lands, I suggest a hotel tower and joining esplanade of retail shops that front onto Bay and George streets. Just north across George is a prime spot for an integrated office tower.

Further west along King Street (south side) the land is horribly under-used by a creepy looking used car lot and a sub-shop/variety store one-floor plaza. Build this side of the street two and three floors to match the north side of King.

This developmend may also prompt a building in place of the Board of Education parking lot; maybe a research and development tower for McMaster University that would finally bring McMaster downtown in a bigger way.

The future use and development of this land will demonstrate how serious the city is about revitalizing Hamilton. It will show us if council and staff really mean what they say or it's only lip service. I, for one, will use this to seriously gauge whether or not my family has a future in Hamilton. 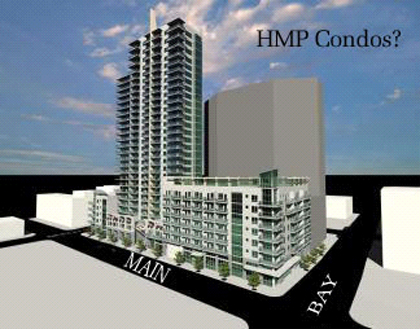 A possible arrangement of mixed-use buildings for the HMP block

I hope that Hamilton encourages a mixed-use, high-density type of development for the HMP, old Federal Building and the surrounding vacant/poorly-used land.

Some in the industry are calling mixed-use a "trend" and cities are using their developments as advertising for their city. "Trend" is not the word I would like to use, because it implies something not lasting.

Actually, this "trend" is a rebirth of the old European city. Call the past 50 or so years a failed experiment if you will. This "trend" makes more sense when it comes to high gas prices, smog, road-rage, traffic jams, socializing and the endless need to create more sprawl to pay for last year's sprawl.

City services, transit and infrastructure are better utilized. As a corporation, the city should see this as mandatory because it makes good business sense. As taxpayers, we should demand better stewardship of our money and the places we call home.

By BROKE MAN (anonymous) | Posted None at

I like how you put trees along the streetscape in the bottom photo. Nice try though. You think city hall will ever lose a few lanes from the Main St highway just to beautify and make downtown more friendly?? You're dreaming.

By Judgefred (registered) | Posted None at

It would be nice to be able to walk up Main St without feeling like you're beside a raceway. Walking to video store could be so much more enjoyable.

I wanted to add that Vancouver is the awknowledged leader in Canada and on the continent for dense, mixed-use urban development. The Vancouver Model is the term in current circulation for describing the form of development desired for this location in Hamilton.

The Vancouver Model calls for a built environment grounded in a very high quality public realm on the street. Its buildings begin at the ground floor with retail and or townhouses that engage the street edge. Above this is a four to five story podium, to create a continous street wall, with offices, amenity spaces, daycares, restuarants, and landscaped outdoor space on the roof. Set back from this podium is a slim residential, hotel, or commercial tower, slim so as to allow light to penetrate to the street and limit its imposition on the views of its neighbours, and spaced a sufficient distance back from other existing towers to afford privacy (80 feet in the Vancouver context). Residential variants of these towers typically offer balconies for outdoor living, and most feature an ornamental cap to hide the roof's mechanical spaces and help define the skyline of a city.

Further reading on this form of development is available. The August issue of Canadian Architect goes into great detail of the Vancouver Model and offers a rigorous, if harsh, critique of Vancouver urban planning that relies heavily on this built form. The Vancouver Achievement by John Punter is another excellent text.

I hope this development comes to fruition and fosters a new era in urban planning for Hamilton.