Raise the Hammer is planning a major study on the future of suburbia. As a baseline for our work, we decided to investigate what the City of Hamilton is doing to prepare for the future. Mary Lou Tanner, Manager of Strategic and Environmental Planning for the city's Public Works Department, agreed to an email interview in which she shared her ideas on suburbs, balanced transportation modes, and the city's efforts to make Hamilton more sustainable.

Ryan McGreal, Raise the Hammer: "Sprawl" suburbs, like most suburbs built in Hamilton after WWII, are designed around personal vehicles. Different building uses are kept separate, buildings themselves are spread out horizontally, separated by wide streets and off-street parking lots, and population density is generally too low to support extensive public transit.

Since global oil production is widely expected to peak and go into decline within the next five to ten years, how will escalating scarcity of fuel for cars affect life in sprawl suburbs?

Mary Lou Tanner, City of Hamilton: When we look at historical growth patterns, in fact the post war suburbs are very much designed around multiple transportation choices. Think for example of Eastgate and the area around it - housing built in the forties, fifties, sixties and seventies all with a transit hub in close proximity.

So the suburbs are not generic but rather a mix of different modes of transportation. No question some are very much car focused. But my sense is most suburbs are actually more balanced in their transportation choices.

I'll leave the issue of fuel availability impacts to the experts on supply and consumer demand/behaviour.

RTH: What, if anything, can cities do to make the suburbs more livable - i.e., people can get around and obtain the food and other items they need to survive?

MLT: Good planning includes providing daily needs for people who live in the community. A balanced transportation system must support good planning - they work hand in hand. This means that cities must commit to integrated land use and transportation planning (and implementation).

RTH: What, if anything, can individual residents, or groups of residents, do?

There is an awful lot that individual residents can do: 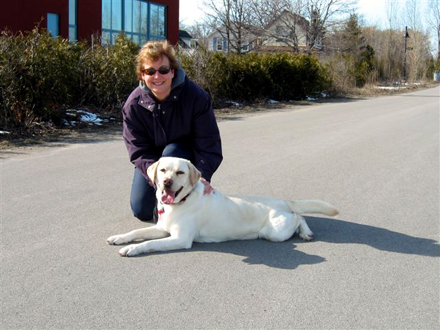 Mary Lou Tanner and her dog, Finnegan, demonstrate the use of Hamilton's Waterfront Trail

RTH: What will the suburbs look like in a world without cheap, abundant energy?

MLT: The interesting thing about suburbs is, as time marches on, they become part of the urban landscape. So there is a temporal component to what is a suburb as what was a suburb in the 1940s is now considered urban in many cities. I think we are looking at cities that mature and provide employment, housing, and accessible, balanced transportation in a mature urban structure.

This means compact urban form supported by a balanced transportation network. In this context, the temporal dimension becomes the focus and the classification of suburb is not as relevant. Its really about good planning and integrated transportation.

RTH: What, if any, role will suburbs play as part of a future city?

MLT: There is always a role for new housing and new employment lands as our population growth increases. Its about the form and location of these areas, how we build them, how we build the balanced transportation network, and how we achieve a mature, compact urban structure.

RTH: What should cities be doing today to prepare for an energy-scarce future?

RTH: What is Hamilton doing today?

MLT: Hamilton is doing an awful lot of the things we need to do - investing in transit service, building the balanced transportation network, reinvesting in our downtown and waterfront as attractive places to live and work, focusing on investment in employment lands and jobs to provide employment in our City. We are also focusing on long term planning for our City's future that implements these key priorities.

RTH: How and how much is Hamilton investing in transit service?

MLT: Hamilton invests in its transit service through our capital and current budgets (annual budgets) as well as our share of the provincial gas tax.

RTH: What is a good balance for the transportation network?

The concept of a balanced transportation network is one that examines the needs of all users and how to accommodate all users in our transportation network. It means looking at pedestrians (wider sidewalks, enhanced crossings), transit (ensuring continuity of service), trucks, cyclists, and cars. In some cases it means off road solutions such as trails. But it does not mean every user gets an equal share of each roadway - rather that in the overall scheme of things we balance the users.

An example: on Main Street West, the City revised the function of the roadway to provide enhanced pedestrian crossings in front of McMaster University. This means there will be an increased delay of 50 seconds for vehicles. Also, because the bicycle trail in this area is on Whitney and not Main, no bike lanes were added to the roadway.

Mary Lou Tanner, M.C.I.P., R.P.P. is the Manager of Strategic and Environmental Planning for the Public Works Department, City of Hamilton. She has been a professional planner in the public sector for seventeen years and has lead many large, complex, multi-stakeholder projects, including downtown planning and waterfront planning. Mary Lou led the City's successful waterfront master plan called "Setting Sail" and the award winning Downtown Secondary Plan for Hamilton (Putting People First). Mary Lou is also leading the City's Comprehensive Transportation and Stormwater Master Plans as part of the City's growth management strategy. She is the recipient of two Planning Awards of Excellence in the Province of Ontario. In addition to her professional responsibilities, Mary Lou is a member of the Council of the Ontario Professional Planners Institute and the President of the Board, Interval House of Hamilton.