Whether it was designed by an architect or not, Auchmar is telling of the styles and influences that were circulating in Canada West at the time.

Auchmar was built for the Honourable Isaac Buchanan and his family in 1855 on land purchased in 1852 on top of the Hamilton Mountain. It was reportedly originally planned as a summer home for the Buchanans but was so well-liked by them that it became a full-time residence.

The house was situated on 86 acres of land on the escarpment and contained stables, a dovecote and parklands with a scenic view of the town and Lake Ontario. (The Hamilton Spectator, July 15, 1936) 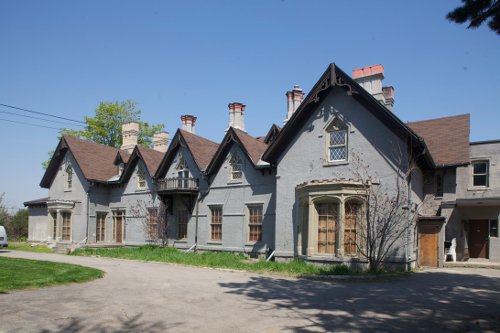 Auchmar is remarkably up-to-date in its use of Gothic Revival motifs, particularly when considering that there is no known architect for the house.

In the mid-nineteenth century, the choice to build in the Gothic Revival style would have been a symbol of the owner's cultural knowledge and would have been considered quite fashionable.

While the Gothic style had long since been employed in Canada, it remained primarily a style for churches. With houses, it was rare, at this date, to find a Gothic house that would have been much more than a classical or Georgian house with Gothic details tacked on.

Auchmar is built of brick with a stone foundation and is covered with stucco. The exterior of the house, as a whole, has a definite symmetrical rhythm. This symmetry, however, is different from that of a classical house in that it is not contained within a predetermined square plan. 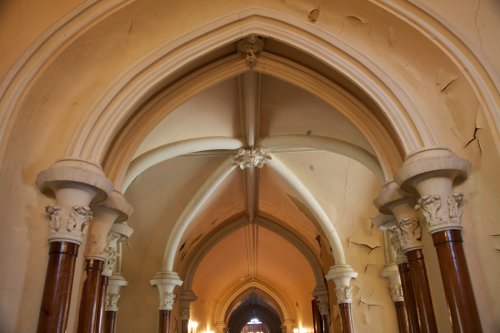 The plan of Auchmar is roughly shaped like the letter H and the gables are steeply-pitched and topped with large, symmetrically-placed chimneys. The exterior is laced with Gothic Revival details such as verge board, wooden pinnacles, balcony, multiple gables, and shallow hood moulds.

The interior, however, is considerably less Gothic. Most rooms make use of only a few Gothic details here and there. The most elaborate use of Gothic detail is in the main foyer where there are pointed arches, heavy plaster rib vaults, plaster foliated capitals and even a plaster boss. 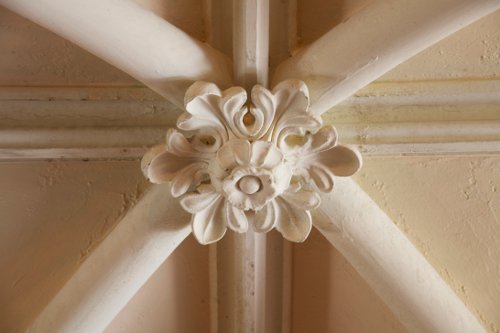 There were many ideas circulating at the time about the proper application of the Gothic style. Perhaps no one was quite as important at the time as Augustus Welby Northmore Pugin (1812-1852).

Gothic Revival buildings exploded in popularity and took a turn for the scholarly when Pugin, an English architect and architectural theorist, began to publish treatises regarding the proper application of the Gothic style to nineteenth-century buildings.

Pugin's plan with regard to houses was twofold: to eradicate the use of classical motifs for homes and to quash the fanciful use of of Gothic through careful planning and stringent decorative principles. 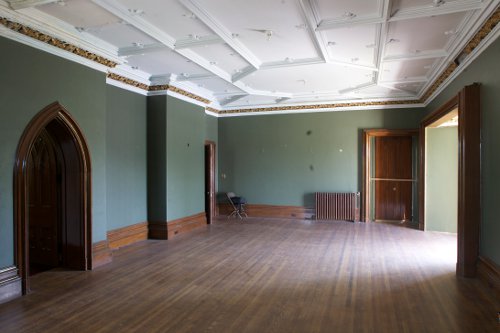 So-called Gothic houses had been built before Pugin, in England and in Canada, though they were often considered to be follies as they were no more than a classical body with Gothic motifs added on, as previously mentioned.

Pugin's theories and influence are responsible for the popularity of the type of understated, non-whimsical Gothic as seen here at Auchmar.

One American theorist who borrowed heavily from Pugin was Andrew Jackson Downing (1815-1852), a landscape architect turned architectural enthusiast who published several influential books, the most popular of which, The Architecture of Country Houses, was published in 1850. Downing's books laid out how to choose a house style for North American settings, climates, materials and even personality types.

Though Downing provided designs for a variety of styles, his preferred style was Gothic. For Downing, the Gothic style was not based on any particular model or even any kind of specific era, and could be conveyed with even just a simple pointed window.

After Pugin, Gothic was seen to be the most adaptable style, particularly with respect to houses in northern climates as it had no predetermined ground plan and because of the practicality of pitched roofs for throwing off snow in the winter. (See: Andrew Jackson Downing, Cottage Residences, New York: Wiley and Putnam, 1842, p.22; Augustus Welby Northmore Pugin, The True Principles of Pointed or Christian Architecture, London: John Weale, 1841, p.48.)

The application of Gothic in the manner of Downing was suited to life in the colonies and represented a feeling of Gothic rather than direct studying and copying of medieval examples in the manner of Pugin. This means that while the house does not look like something that might have been built in the middle ages, we understand it to be of the Gothic style based on a few poignant details.

It seems, then, that Auchmar represents a confluence of ideas from England and from America as there were no such authorities in Canada at the time. The style is definitely Gothic, but it is most certainly the type of subtle and understated Gothic as promoted by Downing.

There are also some residual picturesque motifs that were prominent in Canada at the time, for instance the castellation or crenellation on the exterior bay windows. Crenellation while highly discouraged by both Pugin and by Downing, is not uncommon mid-nineteenth century churches and houses up to the 1860s though it was by then long since out of favour in proper Gothic Revival buildings.

This may also have been the patron's choice as it carries undertones of privilege and power.

Once again, it is important to point out that there is no known architect for this building. The omission (or perhaps the forgetting) of the name of the architect seems strange for a house as highly-valued as this, particularly as the hiring of a reputable architect would have been considered an important act in building up prestige for the home.

This lends credence to the notion that the idea for Auchmar may have come from a book and that details like the crenellation could be added by the patron on a whim. The types of designs provided in the books appealed to architects as well as clients, which means that a learned patron, like Isaac Buchanan, would be able to hire a builder and use ideas and plans from books rather than hire an architect. 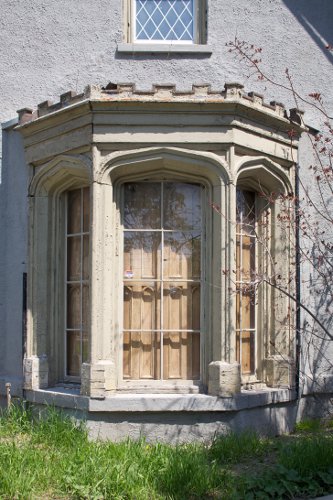 In a large town like Hamilton, it is difficult to guess as to why a pattern book may have been consulted rather than an architect, though it is important to realize that even in a growing city such as this, there were only a handful of architects and they were quite busy building up the town as a whole. 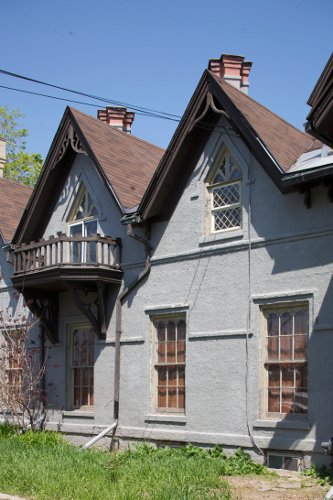 Jessica Mace is a PhD candidate at York University in Toronto, specializing in nineteenth-century architecture in Canada.

Is it open at all for tours? Looks like a wonderfull place.

The fact it is only accessible for 12 hrs out of the year is pretty depressing. Do you know if the city has any plans for the site?

Those asphalt shingles are a travesty.

Whitehead wanted to use it as a student residence I believe.

Looks incredible (other than the shingles). Need to get there soon.

Great article and very informative. Its good to see work being done on domestic Gothic.

I'd love to see a Hamilton Collaborative effort in celebrating our History/ Achitecture/ Skills. I'd love to see the big box companies like Lowes and Home Depot and Rona collaborate on projects ( at Achmar restoration) with Mohawk College trade students. Teach/ repair/ preserve/ celebrate this wonderful building and our History. It could be well advertised and honoured and be a great good will project/ high profile with the big box stores. Add trades attention/ and develop students with excellent mentors. Win Win Win. Yay Hamilton