Planning For The Future...the Distant Future

It's not enough for City Counil to develop great urban revitalization plans, only to leave them on the shelf for fifteen years while they ram more big boxes down our throats and pad the pockets of suburban developers.

As we slowly crawl back from summer vacation and begin pumping out issues for your pleasure I thought it would be wise to start off on an issue that is near and dear to my heart: urban revitalization.

We hear this phrase all the time now in Hamilton, and rightly so. Twenty-five years of taking inner city tax money to build ugly monoliths like the Meadowlands, south Mountain and upper Stoney Creek have left the core in dire need of proper investment. Heck, I would suggest the areas just east of the core are in even worse shape. Go for a stroll along King from Wellington to the Delta or Barton from Wellington to Ottawa. It is quite apparent that this part of our fair city has long been forgotten.

Even as new condo and loft projects spring up downtown and slow progress is being made at the waterfront, the central part of Hamilton is left to fend for itself. This must change. Now. Not in 30 years.

Recently, a new design plan for downtown Dundas and Hatt Street was unveiled. This plan is remarkable and is a great example of the type of redevelopment we need to encourage along Barton, King and Main Streets.

History is preserved and actually enhanced. Public gathering places are prominent, as are venues for outdoor markets, artisans and general street life. Central Hamilton is in dire need of this.

I took my first trip to Montreal earlier in the summer and was thrilled at what I saw. I couldn't help but see a perfect model for Hamilton to follow in our urban revitalization efforts. Put cars in their place, and allow cyclists and pedestrians to gain more influence in the feel and livability of inner city neighbourhoods. 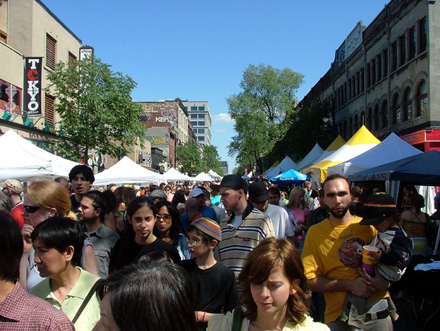 Street festival in Montreal - this street was closed for local residents, not Joe Hollywood

Yes, city council, that means losing the brutal five lane highways known as King and Main and give these historic streetscapes a chance to thrive once again with shops, cafes, offices, hotels, clubs, music venues, patios, markets and galleries. Montreal can do it. Why can't Hamilton?

To me the answer is very simple – political will.

Our politicians can meet three times in a two week span and decide to approve up to $100 million to service land around our airport. The same airport can't keep a passenger airline for more than two years.

Any time the Red Hill project manager shows up with an extra expense of ten, twenty, or fifty million dollars, it takes about ten minutes to approve the expediture.

Yet, wonderful plans – city-developed plans (I have no problem giving credit when it is due) – for King West streetscaping, King Street two-way conversions and 'transit improvement studies' have painfully long implementation timelines approaching fifteen years.

Last issue, I proposed an investment plan for downtown Hamilton that would cost less than aerotropolis and Red Hill and would actually begin to change the image and reality of our downtown and surrounding neighbourhoods instead of destroying them with more sprawl.

The above-mentioned plans for downtown Dundas are not going to begin until 2010, and that will only happen if council approves it in the 2007 budget. Why is there great political will for suburban sprawl projects whether they're called 'Meadowlands', 'aerotropolis' or 'Red Hill'. Yet downtown revitalization projects are spread out over two decades?

Don't get me wrong. I understand the need for long range planning. However, unlike most of our council I also understand that our city will never turn the corner and become a model for other Canadian cities to look at until we invest properly and heavily in the downtown area.

Why would 'new economy' businesses come here when they can go to Ottawa, Toronto, Vancouver or Montreal? Heck, why do most new residents in Hamilton move here? Cheap housing. What kind of reputation are we enhancing when our most prized claim is that it costs less to live here?

Guess what: it costs less to live in Buffalo than San Francisco, and less to live in Omaha, Nebraska than New York City. I don't those cities are necessarily bragging about that though. It's time for Hamilton to become ambitious again.

We changed our entire downtown street system from two-way to one-way in a single evening in the 1950s. Now, its taking us ten years to change three or four downtown streets and who knows how much longer before we get to the ones like Main, Cannon and King, which really need the conversion.

As a local resident and taxpayer, I am tired of being treated like a second class citizen, yet when Joe Hollywood shows up the city is willing to bend over backwards and do whatever necessary to accommodate them. I was all for the closure of Main Street for a movie shoot for two weeks, but am frustrated by the fact that we are never able to have these same streets closed for you and me – the ones who live here.

The fine folks who bring us the Mustard Festival each fall have been stonewalled time and time again when asking the city for permission to close King St for the festival weekend. Mayor DiIanni made the pedestrianizing of Gore Park one of his top ten things to get done in 2005. So far, nothing.

You and I simply aren't important enough. Hollywood is. And the ability of suburban councillors to rip in and out of the city to work every day is, but you and I, the ones paying their salaries, don't matter much.

Unfortunately, we have nobody to blame but ourselves. After all, they treat us like crap year after year and then we vote them back in. What do you expect?

Residents of Hamilton need to understand that most of our current council has an obligation to the homebuilding industry due to their election campaign funds. This has been the case for over 20 years and the state of the city shows whether this has been good or bad for Hamilton. It's not even close.

Talk to your neighbours, friends, family members and co-workers. Begin to prepare people for the upcoming election next year. Hamiltonians are duped into voting for the 'business' friendly candidate every election as the corporate machine plasters the city in billboards and TV commercials.

Of course, the Spectator jumps on the bandwagon and always seems to 'endorse' the most sprawl-loving candidate and many Hamiltonians lazily allow this daily publication to shape their vote. You and I can bring about a change at city hall. And we need to.

It's not enough for them to develop great urban revitalization plans, only to leave them on the shelf for fifteen years while they ram more big boxes down our throats and pad the pockets of suburban developers.

It's time to make urban revitalization a priority in Hamilton. 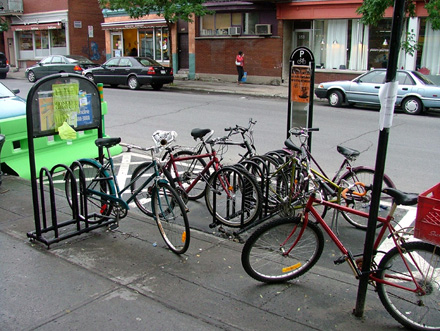 Bikes are well used in Montreal