The James Street Book Seller has called this street home for the last five years, dealing in quality used books, selected new releases from local authors, and any book your heart desires via special order.

James Street South, seemingly confused between a pharmacy district, mountain-bound expressway and boutique retail hot spot, is the commercial heart of the Durand Neighourhood. A downtown within a downtown, the mid 19th century stone rowhouses stretching between Bold and Duke Streets form the centrepiece of this business district.

The James Street Book Seller has called this street home for the last five years, dealing in quality used books, selected new releases from local authors, and any book your heart desires via special order.

Recent and classic fiction are the top sellers; local history is also very popular. It was here that I obtained my copy of the venerable Hamilton political history Their Town for $10 (it's out of print; Amazon.ca has used copies for $62.95).

Owner Monique Doepel makes me an espresso (always free for customers) and shares a little bit about her adventures in retail. 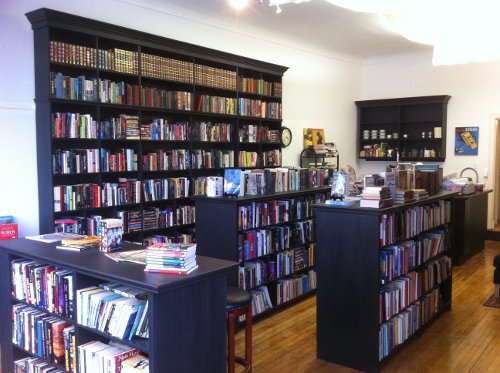 Monique and her partner had moved from Toronto's booming Queen Street West, seeing new opportunity in Hamilton. She recalls, "We basically doubled our money on our house. We thought, we could stay and fix the roof and foundation, or we could sell, make some money and buy a cheaper place in Hamilton."

As is often the case, Toronto's loss was our gain. Monique eventually acquired the stock of a bookstore that had closed a few doors down and set up shop in the basement of 158 James South.

A few years later, the building's owner needed the lower level for her own business, the aptly named Dungeon Divas boutique, and the book store expanded to the main floor. Thanks to a fortunate linguistic coincidence, the store was able to keep its name in all but the spelling, simply changing 'cellar' to 'seller'.

The main floor was renovated and custom shelves installed giving the store a fresh look and presence on the street. This space has hosted local songwriters, bringing in a crowd on a cold winter night for hot cider, music and of course books.

This past summer the expansion of Dungeon Divas, another success on James, saw Monique looking for a new home once again. This time the location was up for debate, and she investigated emerging districts in the north end, Ottawa Street and King Street East.

In the end she chose to remain where her heart was, and took a space in the chronically vacant former Claudia's building at number 134. It was a perfect fit - the size and layout were nearly identical, and the shelves and furniture were only rearranged a little. 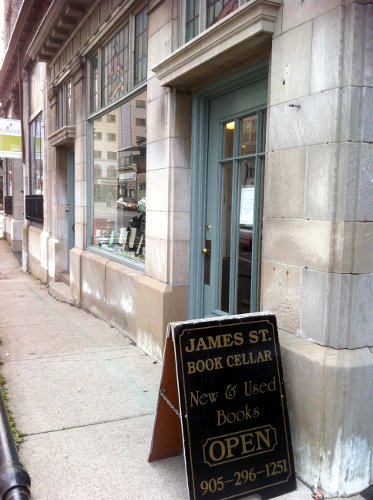 The new Book Seller claims a unique piece of geography where the roadway was lowered to cross under the railway tracks and the sidewalk was kept at building level.

This has proven to be a blessing because although the store is barely visible to passing drivers, it sees a steady flow of pedestrian traffic thanks in part to the neighbouring Hamilton Conservatory for the Arts.

"There's been a huge difference, all these people coming in saying they didn't even know I was there," says Monique. "I thought maybe it would be a problem with the sidewalk going under the underpass as well as above, that I would lose half the foot traffic, but I can see peoples' faces as they're walking up there and they're looking into the window."

The new space includes a basement lounge with kitchen, soon to be host to book clubs, knitting groups and tarot card readings. This low cost meeting space will invite a multitude of community based groups to the area.

The James Street Book Seller is open Monday through Thursday 12-8, Friday 12-6 and Saturday 10-6. Next time you are seeking out a new title, save yourself the drive to Meadowlands and head over to James Street, enjoy a cappuccino and a chat with Monique. She'll take care of your literary needs right here in this downtown neighbourhood.

This article originally appeared in The Durander, the newsletter of the Durand Neighbourhood Association.

Jonathan Dalton runs a small music shop on a two way street in downtown Hamilton. He is a board member of the Durand Neighbourhood Association, and volunteers with Transportation for Livable Communities.

Good to hear they have survived all of these moves. I also only noticed their store after this latest move so it sounds like it will work out well for them!

Thanks to a fortunate linguistic coincidence, the store was able to keep its name in all but the spelling, simply changing 'cellar' to 'seller'.

It used to be cellar, it changed to seller when they moved out of the basement.

Got it! Thanks! James South, apart from Steve's Open Kitchen, is a part of Hamilton I haven't much explored.

Wonder if anyone remembers Henry Black, the bookseller on Main around Kenilworth? He passed away about 5 weeks ago. Mr. Black had the books piled up to the ceiling in a system that only he understood. His was no fancy store in a nice area. He was a fixture in Hamilton, and an eccentric! I was a regular customer, he had some wonderful old text books on Stationary Engineering and other technical subjects. He had a rare, old complete 62 volume correspondence course on Stationary Engineering that I was dying to own. We agreed on a price ($500!) but he wouldn't let me have them, "I'm not quite done with them yet". I heard that many times from Mr. Black, he couldn't let this or that go yet, he just loved the books so much.

I will always remember you Henry Black, you are missed.

I remember the Book Cellar from the mid to late 1970s. Scott Park Secondary School used to hand out gift certificates to the Book Cellar as proficiency awards. Always bought some SF from there. Great memories of going there 35 years ago. Time to go back!

Great to see a successful indie business that isn't a bizarre fetish shop or overpriced hair salon on James S. I tried to buy one of the row properties on that street with the intention of converting it into a travellors accommodation. Couldn't get zoning approval due to parking issues. Gee.

Sad to hear about Mr. Black. The best store ever. Jessie's crazy store on locke was awesome too.