Slap Shot is a Bona-fide Classic

Slap Shot is a funny way to get reacquainted with the game of hockey and Paul Newman in his prime. Despite the film's age there's a real sense of timelessness to it, regardless of when it's set.

Being a movie and a sports fan it's a bit awkward to admit that I'd never seen the every-Canadian-citizen-needs-to-see-or-else-they-deport-your-ass hockey classic Slap Shot, something that a few of my co-workers were positively horrified by ("How have you never seen it?!").

But with hockey fever sweeping the nation with the Olympics going on (well, relatively sweeping the nation), now's as good a time as any to examine this flick, which actually does deserve the "classic" label that is attached to it.

There aren't that many great hockey movies to begin with and no one seems interested in putting any out, considering that the closest we got is The Rock in The Tooth Fairy. But even with the sometimes-dated '70s look (check out the hair and the stylin' clothes), Slap Shot's themes of economic depression, rampant hockey goonery, and the group of misfits that wins the hearts of the people is universal - and it has a really, really screwed up ending, which is totally a bonus. And it's really funny, too.

Reggie Dunlop (Paul Newman, in full leading-man mode) is the player/coach of the perpetually losing Charlestown Chiefs. Since the team is bleeding red ink and the town mill is closing down - plus the little fact that nobody can seem to know who actually owns the team - all hope seems lost as talk of closing down starts to surface.

The fans love it and there may be hope for the scrappy underdog after all. Yes, the plot seems familiar but a lot of that has to do with the fact that so many countless sports movies follow the same formula. There's nothing wrong with being formulaic as long as the individual pieces are put together with some flair. 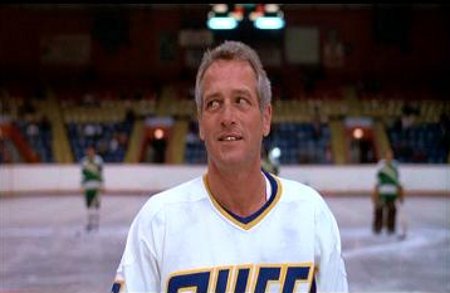 Paul Newman said that this was one of his favourite roles, and his affection for it shows.

Certifiably a film acting legend, the late Paul Newman is a very cool and really amusing as the lead. The straight man role in any comedy is hard to get laughs, but Newman is great at being exasperated at the team losing and he frequently has to lie his way out of situations to inspire his players. He's also a tough dude, so you can totally buy that he can smack the hell out of anyone on the ice even if he's older than them.

But the characters everybody remembers are the Hanson brothers. This is because they're hilarious in every scene. Complete dullards they may be, but they have an infectious joy for just about everything that makes you laugh. Like any good players, they always listen to their coach: when the coach says to fight, they fight; when he says to play "old time hockey" they do... and quickly get the snot kicked out of them. 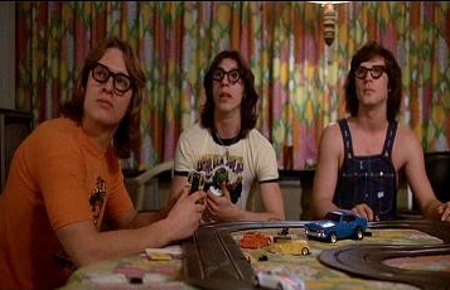 A lot of the movie's heart actually comes from a sub-plot about one of the players' wives, Lily, and how she has to deal with living in a dead-end town with an unfaithful and seemingly uncaring husband. It adds a bit of emotion because it shows how being on the road can strain a marriage.

Ruined relationships is theme here, and these guys aren't sympathetic to each other. Instead, they use it to win on the ice. One drunken player slurs how his wife is leaving him but he still plays hockey (which Dunlop then exploits like any good opposing player would do.) When Dunlop has a bit of ... um, personal information about the wife of an opposing team's goalie, it leads to one of the movie's most memorable scenes. 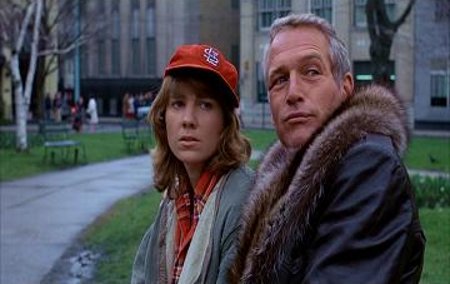 Dunlop's friendship with a player's wife gives the movie a soul.

The pace of the flick is great because it bounces extremely fast between one little aside with a character, cut to another character making a smart remark, and then cut back to what the first guy was doing, etc. It kind of contradicts the era it was made because mid-70s films were a bit slower paced, and this rapid-cutting interplay is something that came to prominence in '90s era comedies.

Even the opening scene is hilarious when Dennis Lemieux (Yvon Barrette) explains going into the penalty box that it's "two minutes, by yourself, and, you know, you feel shame, you know. And then you get free." Instantly iconic, even if you've never seen the film.

Slap Shot is a funny way to get reacquainted with the game of hockey and Paul Newman in his prime. Despite the film's age there's a real sense of timelessness to it, regardless of when it's set. I know there's direct to DVD sequels, but one of them has a Baldwin and a Busey in it so let's all just forget those exist and remember Slap Shot as a bona-fide classic.

I must admit, I love the movie.

I visited Johnstown, Pennsylvania in November 2008 (just drive to Buffalo and follow US 219 all the way down), for which "Charlestown" was a thin disguise, the Chiefs masquerading as the Johnstown Jets. Johnstown has had a sad recent history - the mills did close, but they remain standing. The town had probably the best small transit system in the US - abandoning the streetcars only in the 1960s, the trolley buses only a decade after that. The downtown is really depressing, but not as endangered as say Brantford. But they do have a really neat incline railway ride (operated as part of the transit system) and the Chiefs play today at the War Memorial.