The new provincial Greenbelt plan might finally bring an end to sprawl.

I didn't vote for Dalton McGuinty. The provincial Liberals in some ways make their federal counterparts seem honest, Ad-scam notwithstanding. However, there is one piece of proposed legislation that makes all of McQuinty's broken promises and the new healthcare premium worth it, - I'm talking about The Greenbelt.

The Government of Ontario is acting on Ontarians' priorities and is delivering real, positive change that will build strong, prosperous communities with a healthy environment and quality of life that is second to none.
- Places to Grow, Ontario's Vision, 2004

Hamilton has been identified as a Primary Urban Area, which will absorb 75 percent of the expected growth under the Greenbelt plan. All of Hamilton's growth will have to take place within the existing urban boundry except for a small undeveloped area around John C. Munro International Airport, which is mainly planned as employment lands.

In a nutshell, current sprawl development will have to stop.

Sprawl development usually refers to low density housing subdivisions, typically built on the fringes of the urban boundry. They are automobile dependent and poorly serviced by mass transit. Middle-income working families are forced to commute to work.

Single-use buildings and zoning contribute to a spread-out neighbourhood, which makes it impossible to walk to any destination, and bicycling becomes dangerous due to the supremacy of the car. Sidewalks are often absent because they aren't used, contributing to social isolation, obesity, gridlock, smog and 'cocooning'.

This is evident in the features found in these houses: home-entertainment theatres, game rooms, and rooms designed to feel that you are somewhere other than your home. Why? Because the neighourhoods are depressing, social wastelands and to do anything requires getting in the family car and driving to a destination, (usually shopping at a 'big box') spending some money and then driving home.

Witness the single-use retail strips with their vast parking lots that spring-up around a housing development. Some may argue that sprawl has also contributed to the record level of consumer debt that plagues today's families.

What else is there to do other than shop? Where are the librarys, town halls, community centres, social clubs, and public spaces to socialize? In the suburbs, we basically don't know our neighbours, and see them as obstacles to our destination or taking too long in line at the cashier. 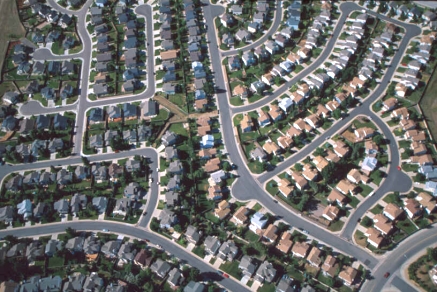 The Greenbelt should have a huge impact on the way we live. This will be the most significant piece of legislation since 'downloading', where the province swapped certain responsibilities with the municipalities.

I am very encouraged by the prospect that sprawl development will soon stop. It was disheartening, however, that it took a provincial government to do this in the first place. I would have preferred if home developers gave more choices to home buyers and had more concern for our environment as well as our mental and physical well-being.

I agree because I don't think sprawl, single-use, low-density, car dependent development on the fringes of the city would have ever stopped until the end of cheap oil forced it upon us, and a forced decision is more difficult to deal with then a planned and prepared decision.

It is obvious that municipal governments were incapable of stopping sprawl. Why? Did they lack the power? No, by-laws and zoning are more then enough power to prevent decay of the older city and maintain a livable city.

Then why did it happen? The city was constantly under pressure to continually expand the urban borders and then to provide services to this new raw green space. Once the city services were in place, the formerly cheap farmland then became a goldmine of new homes.

Ten thousand dollars an acre turned into $150,000 per acre or more and that kind of money has too much influence over the provincially delegated government we call The Municipality.

The Government of Ontario respects the ability of municipalities to make decisions that are in the best interests of their citizens, considering their long-term local planning initiatives. And frankly, local communities need some control over their own futures. At the same time, however, it's the Province's responsibility to look at the broader picture - and to ensure a prosperous future for all Ontarians by maintaining a healthy and attractive Greater Golden Horseshoe.
-- Places to Grow, FAQs 2004

So thank you, McGuinty and the Greenbelt Taskforce, for looking at the broader picture and making a decision to curb sprawl today, rather then ultimately having an infinitely more painful decision forced upon us by those powers we like to call the free market.

The Greenbelt calls for higher density, multi-use neighbourhoods, brownfield and infill devlopment. This is in no way anti-growth, or intended to stop development. It forces the building industry to change its ways, and our traditional definition of 'growth'. It is building the way we used to.

This will reduce pressure on highways, ease gridlock, protect tender fruit lands and local agriculture, reduce smog, and improve health, to mention some of the benefits. What could be wrong with that? Higher population density appears to make places like Toronto, Vancouver, Boston, Manhanttan, and virtually every European city more livable.

The challenge for us is to determine how we grow, where we grow, and to find the right balance between greenfield development, urban core development and the financing formula.
- Mayor Larry DiIanni, State of the City luncheon, January 20, 2005

The right balance between Greenfield and urban core development? Hamilton recently approved a big box 'Power Centre' on the fringe of downtown Waterdown. A proposed one million square feet of retail space that will be located on the fringe of the proposed Greenbelt.

This will be Power Centre number three for Hamilton. Is this 'the right balance'? It is interesting to note that the locations of all three Power Centres are on the very edge of the Greenbelt (see map, below).

Who will this benefit? How will this ease gridlock, reduce smog, preserve local agriculture and more importantly for Flamborough, preserve the identity of Waterdown? This is precisely why the provincial government felt the need to 'see the broader picture'. 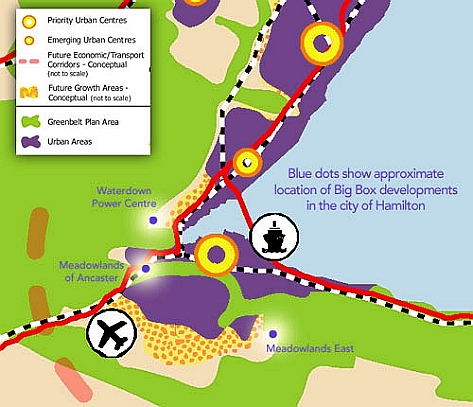 Waterdown, meet Faceless. Faceless, meet Waterdown - and Waterdown, say goodbye to Mom and Pop. Your local economy will be lost and, with it, your sense of neighbourhood identity. But I suspect it will be widely supported and patronized by the residents of Flamborough. As James Howard Kunstler puts it, "They sold their community to save three dollars on a hairdryer".

The suburbanites now have to visit the edge of town via automobile to purchase goods, rather than a geographic central downtown, accessible by transit, walking and convenient for the entire area. Teenagers trying to be independent by obtaining part-time work require their parents to drive them to and from their job at Fortinos or to SilverCity to watch a movie with friends.

That may be true, but it is proven that sprawlling residential suburbs cost far more to maintain and service than they add to the tax base. Aging infrustructure is sacrificed for new roads, and new roads are financed by newer roads.

Grimsby councillor Debbie Zimmerman stated that farmers in the Niagara Region counted on selling their land to developers when it came time to retire and now they won't be able to sell because of The Greenbelt. What about the farmers whose land isn't on the edge of the urban boundry? Land developers weren't lining up to buy their land.

Are they not entitled to a retirement payout too? The reality is a select few farmers will be without the million dollar payout.

The land is far more valuable to everyone of Ontario as agricultural land. The soil and geography is unique to Canada and our short growing season. Agriculture injects more than one billion dollars annually into Hamilton's economy. Also important is that locally grown food doesn't have to be transported thousands of kilometers, saving all those exhaust fumes from entering our air. Let's not 'sell the farm'.

Hamilton's census metropolitan area population is expected to incease to 1.5 million from the current 720,000 (as of 2001). Will the Province have to dictate zoning, density and type of development next, because Hamilton continues to maintain status-quo? Or will Hamilton come to the realization that the Greenbelt is a reality?

The status quo still seems to dominate municipal policy, Waterdown's Power Centre for example. It just might be possible that the city doesn't know what to do with the Greenbelt anymore than the land developers do. In the words of Burlington's Mayor Rob MacIssac, "There will be life after the Greenbelt".

In the Spectator not too long ago it said that there's only enough land for the next 11.5 years of growth in Hamilton. That's crazy.