It is past time for settlers in Canada to begin to reckon with the genocidal legacy of colonial oppression.

I am writing this on the traditional territories of the Haudenosaunee Confederacy, Erie, Neutral, Huron-Wendat, Anishinaabe and Mississauga nations.

This territory is governed by the Two Row Wampum Belt Covenant, an agreement dating back to 1613 that First Nation and settler communities should travel the river of life side by side as equals, each with their own laws, customs and traditions.

The Two Row relationship between nations was meant to be characterized by mutual respect and friendship, not by interference and domination.

This territory is also governed by the Dish With One Spoon Wampum Belt Covenant, a treaty to share and protect the land made between the Anishinaabe and Haudenosaunee nations in the Great Peace of Montreal agreement of 1701 CE.

The dish represents the land and its abundance. There is only one dish and we are all responsible to take care of it and ensure it is shared equitably. That means protecting common hunting grounds and sharing the harvest.

Likewise, there is only one spoon that we must take turns using to take what we need and then pass the spoon along to the next person. It's a spoon, not a knife, because we are committed to resolving our conflicts without violence.

We Are All Treaty People

The Dish with One Spoon treaty of 1701 was based on the law that dates back to 1142 CE. In 1764, the treaty was extended to settlers as part of the Treaty of Niagara, which represents the Indigenous nations' understanding of their relationship with the British settler government following the 1763 Royal Proclamation, which committed the Crown to guaranteeing the rights of Indigenous peoples and dealing with Indigenous nations on a nation-to-nation basis.

The Two Row and Dish With One Spoon treaties were never repealed. They are still in force of law. Today, all settlers are treaty people living on treaty land, and we have a solemn duty to understand what it means to live within the terms of these covenants.

That, in turn, entails confronting and reckoning with the violent, genocidal legacy of settler colonialism that continues unreconciled to this day.

One way that colonial systems of domination persist is by relentlessly compelling people to accept and internalize the logic of oppression. If people are forced to compete for positional advantage in a zero-sum hierarchy, that precludes them from working together to dismantle it.

This logic of oppression underlies the Indian Act in its many genocidal directives. It wasn't enough to colonize the land of Turtle Island, negotiate in bad faith and displace its inhabitants. The government of Canada has also been determined to colonize the very minds of Indigenous people through forced assimilation.

One of the precursors of the Indian Act was literally called the "Gradual Civilization Act" of 1857, which violated the Royal Proclamation by trying to assimilate Indigenous peoples to European settler customs.

The Indian Act, first introduced in 1876, was a sweeping framework that denied Indigenous people their languages, religions, traditions, customs, freedom of self-governance, assembly, movement, expression, even their very names.

The Residential School system, mandated and funded by the federal government and operated by various Christian organizations, primarily the Catholic Church, was an extension of the genocidal mandate of the Indian Act. They existed to extinguish the cultures of the children forced to attend them.

The objective of the Residential Schools was to forcibly separate Indigenous children from their families, communities and cultures, and substitute the culture of domination of their colonial oppressors.

The neglect, abuse and trauma that characterized these schools was not a side-effect or a by-product, it was central to their explicit mission of cultural genocide.

At least 150,000 Indigenous children were forced into Residential Schools where they were abused and traumatized. Thousands of children were murdered in these places, and too often their remains were buried secretly on school grounds instead of returned to their families to mourn.

The recent discovery of 215 children's bodies at the Kamloops Residential School happened because the T'kemlups te Secwepemc nation took it upon themselves to undertake a ground-penetrating radar investigation to search for their missing children.

The Kamloops Residential School was not atypical, and Indigenous people are only too aware that it is not the last mass grave that will be uncovered.

Since then, the Cowessess First Nation in Saskatchewan has discovered another 751 unmarked graves at the Marieval Indian Residential School.

Cultural Genocide by Other Means

The Residential Schools began to recede in the 1960s, but they were quickly replaced with a social services infrastructure that continued the policy of cultural genocide by other means through the forced removal of children from their families by social workers.

During the "Sixties Scoop", which ran from the late 1950s into the 1980s, social workers seized some 20,000 Indigenous children from their families and forded them into foster care to be adopted by white families.

The last Residential School closed just 25 years ago. This is not ancient history, and it is not time to 'get over it' as some colonial apologists have dared to suggest.

For a century, the RCMP enforced the mass kidnapping of Indigenous children into Residential schools. Today, the same system of colonial oppression continues to exercise the racist, violent policing of Indigenous, Black, Racialized, Queer and marginalized communities.

On Reserves - the slivers of land set aside for Indigenous people after colonizers displaced them from their homes - the Indian Act replaced traditional self-governance with the band council system, mandated not to represent the community but to enforce the terms of the Indian Act.

Nor were Indigenous people allowed to participate in Canadian federal or provincial elections, unless they renounced their own cultural identity and agreed to assimilation. (This was called "enfranchisement".)

Indigenous communities weren't even allowed to hire lawyers or launch legal land claims without the consent of the federal government.

The statutory right to vote in federal and provincial elections was not extended generally to Indigenous people until the 1960s. Universal suffrage was not guaranteed to all until the Charter of Rights and Freedoms in 1982.

The first Indigenous person elected to the federal government was Leonard Marchand, of the Okanagan Band, who was elected as a Liberal MP for the Kamloops-Cariboo riding in 1968. (If you are wondering: yes, he was forced to attend the Kamloops Residential School.)

Yet Ottawa remains profoundly hostile to Indigenous people to this day. If you haven't already, please take the time to listen to the farewell address by Mumilaaq Qaqqaq, NDP MP for Nunavut, on why she not running for re-election.

The long arc of settler colonialism in Canada is a story of domination, displacement and attempted assimilation and cultural genocide carried out with callous disregard and perpetuated by white supremacist colonialist mythologies and a vast quantity of ignorance and denial.

But it is also a story of survival, resistance, perseverance, and the persistence of cultural identity and solidarity in the face of intolerable oppression.

It is a story of languages and customs reclaimed from persecution, of potlatches and sundances and powwows and harvest festivals held in defiance of colonial edicts, of oral histories passed down and long cultural memories held in sacred trust.

In Haudenosaunee territory, where I live as a settler, it is a story of 13 ceremonies to mark 13 moons: Thunder Dances, Sun and Moon, celebrations of maple and strawberries and corn and string beans and harvests from Midwinter through End of Seasons.

It is a story of six nations that came together, worked through their differences and formed a confederacy that has lasted centuries, sustained a bulwark against oppression and provided a foundation for meaningful resistance against ongoing colonialism.

It is a story of deep legal principles - like the Dish With One Spoon law - that have sustained alliances and fostered solidarity through centuries of disruption and dislocation.

If you are a settler, I invite you to commit to the work of learning the real history of colonialist oppression that wasn't taught in school, and to dedicating yourself to the cause of justice and reconciliation.

Indigenous peoples comprise more than 50 nations living in over 630 Indigenous communities, as well as every settler community in Canada. Learn about the specific Indigenous nations and treaties that govern the land you're living on. 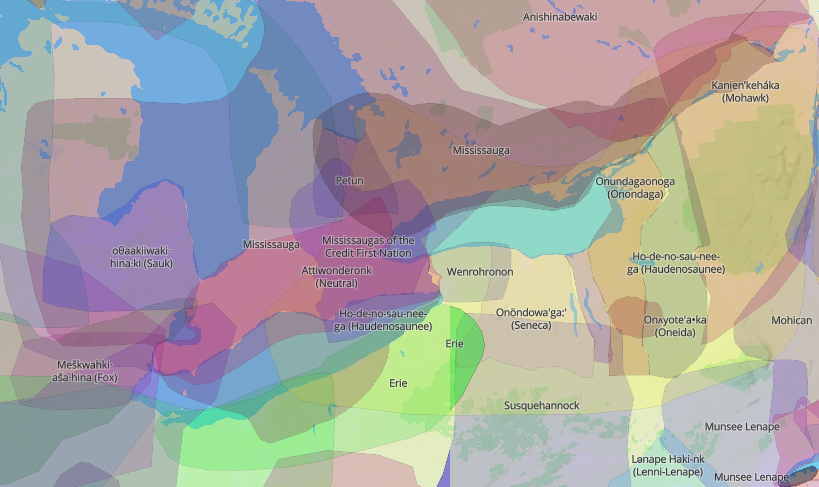 Read the final report of the Truth and Reconciliation Commission (TRC), which determined in unequivocal terms that colonial policy toward Indigenous People in Canada constitutes cultural genocide:

Cultural genocide is the destruction of those structures and practices that allow the group to continue as a group. States that engage in cultural genocide set out to destroy the political and social institutions of the targeted group. Land is seized, and populations are forcibly transferred and their movement is restricted. Languages are banned. Spiritual leaders are persecuted, spiritual practices are forbidden, and objects of spiritual value are confiscated and destroyed. And, most significantly to the issue at hand, families are disrupted to prevent the transmission of cultural values and identity from one generation to the next. In its dealing with Aboriginal people, Canada did all these things.

Read the Calls to Action and find ways to address them in your life and your networks.

Read Reclaiming Power and Place: The Final Report of the National Inquiry into Missing and Murdered Indigenous Women and Girls, which determined:

Study the Calls for Justice in that report.

Explore the rich and powerful collection of documentaries and films by Indigenous filmmakers hosted by the National Film Board.

If you are living in Haudenosaunee territory, contribute some money to the Land Defenders of 1492 Land Back Lane so they can continue their anti-colonial resistance and mount a legal defence of their right to self-governance and self-determination.

If you would like to learn more about the Indian Act, read the book 21 Things You May Not Know About the Indian Act by Bob Joseph. It provides essential insights into the corrosive effects of the Act in a highly accessible format.

The cause of truth is long overdue. The time for excuses and denials and deflections is long past. There can be no reconciliation without authentic justice.