Why are Conservatives so reluctant to, um, conserve?

After the Conservative Government cancelled $3 billion in federal initiatives to reduce greenhouse gas emissions, Rona Ambrose, Canada's Environment Minister, announced that Canada will not be meeting its emissions targets under the Kyoto Accord.

Big surprise. According to the Kyoto Agreement, Canada is supposed to reduce its greenhouse gas emmissions to six percent below its 1990 level by 2012. After over a decade in which the governing Liberal Party did almost nothing to address Canada's emissions, which are among the highest per-capita in the world, Ambrose is ready to announce that Canada's greenhouse gas production is currently 35 percent above its 1990 level.

Dismissing the target as unachievable, Ambrose said meeting it "would mean that today we would have to take every train, plane and automobile off the streets of Canada. That is not realistic."

In other words, it's a factually incorrect statement that helps achieve their ojective, which is to splinter the country through emotional wedge issues and a generous dollop of confusion, and then scoop up enough votes to form a majority in Canada's first-past-the-post system.

To see how Canada might move in the right direction instead of simply accepting the do-nothing status quo, we could do much worse than consider the example of Portland, Oregon. In 1993, the city (joined in 2001 by the county, Multnomah Co.) adopted a plan (PDF) to reduce its greenhouse gas emissions to ten percent below its 1990 levels (gotta love a high achiever).

Portland established a firm urban boundary, encouraged aggressive infill development, expanded its transit network, including new light rail lines and increased ridership by 75 percent, planted 750,000 trees, retrofitted 10,000 apartment units and 800 homes in the past two years alone, and arranged to obtain (for the corporation of the city) ten percent of its energy from renewable sources. These measures are working so successfully that Portland is actually on track to meeting its objectives. 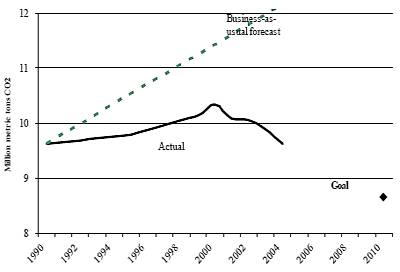 Canada has no excuse to be lagging so far behind the meagre targets to which it committed through the Kyoto Accord. That the two major federal political parties have failed utterly to address this global issue is a significant failure of our political process overall.

The Liberals only initiated some modest proposals at the end of their stint in government. The Conservatives have decided to abandon even those modest activities and align with the US government's "alternate" plan to set voluntary, rather than mandatory, targets with no accountability.

Ironically, this may actually have the effect of forcing munipalities to take up the slack that the federal government has let go. This is happening in the United States, where the mayor of Portland spearheaded a climate change campaign now adopted by over 200 cities.

Hamilton has an opportunity unique in history to take a leadership role in Canada. Between the city's proposed climate change action plan and Richard Gilbert's recent peak oil report, our city government might just get the message that our best hope of future prosperity lies in cleaning up our act.