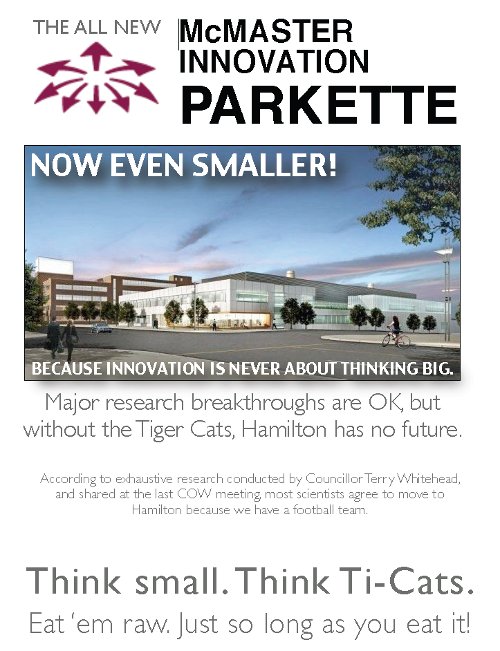 take it easy folks..... remember this is a compromise (actually for real this time). yes i understand these lands are important for employment. but this could also bring the opportunity to "intensify" the MIP by building UP. maybe this is the way to turn this into an urban business community instead of a suburban office park....

just a thought... i'm trying to keep positive on this, there are still a lot of benefits for both sides. maybe BY could lease office space instead of big box space?

If Bob gets his way maybe we'll have to change the name to McMaster Innovation Parkinglot.

If Bob gets his way, that would mean the stadium would be built at Confederation Park. Even though he has suggested around 10 sites, CP is the prized one but that will not happen as we know.

JM you make some valid points. I've always felt the plans for MIP were much to suburban. Our skyline and 403 view could use some 10+ story buildings here instead of a bunch of 2 story jobs.
Obviously this site would not have thousands of parking spots but LRT would run by it and it very well may be our best compromise site. There's no reason why high-rise hotels an office buildings couldn't be built here to maximize the potential number of jobs.

Apparently a high-rise hotel is already in the works at the end of Frid street. I imagine that developer is salivating at this possibility.

A notion worth revisiting:

"The notion of fixation in psychology describes the inability to view a problem from a fresh perspective.

If a problem is at first incorrectly represented in our minds, it is extremely difficult to restructure how we approach it, particularly under stressful situations.

For instance, during the Korean War, a paratrooper was given the last available parachute, a left-handed version. This parachute was exactly the same as the others, only the ripcord was on the left side of the harness. There was one fatality on that particular jump and it was that of the man with the left-handed parachute. Investigators later found the man, the right side of his uniform had been completely torn off, even the skin beneath it had evidence of his frantic searching, while the ripcord remained untouched a few inches to the left. This man was so incredibly stressed by the jump that he had fallen (no pun intended) into fixation about the presupposed location of the ripcord and could not restructure his view effectively.

Another type of fixation is known as functional fixedness. This is the tendency to perceive objects as having fixed functions. For instance, searching all over the house for a screwdriver when a butter knife would do fine (In my experience, women are better at this particular type of restructuring than men).

In conclusion, problem solving can be greatly, and sometimes fatally hindered by things as simple as these presuppositions one which we base our daily lives. One must be careful not to let them become to rigid." ~ Everything2

Collaborative Fixation: Effects of Others’ Ideas on Brainstorming

I'm trying to keep an open mind, but I have a very bad feeling about this Longwood idea. I thought location was already studied and rejected. I don't see how this helps our ability to maximize the commercial development side of these lands. Bob Young said he wanted a stadium district, which sounds like a retail area to me. That idea was already opposed when Trinity tried to build a boxstore mall in the area. It doesn't help the city with its GO Train plans, although it would be near LRT. We have to keep in mind that LRT plans are less tangible than the GO expansion. I see the involvement of McMaster to the 3 current partisan groups of the city, Hostco and Tiger-Cats as a serious impediment to getting a deal under tight timelines. I have no idea how far along their plans are for MIP, and if they are at all flexible. I would love to see a MAC presence downtown, but historically, they have been all talk and no action on the issue. At the end of the day, I am not willing to bend over backwards to try and satisfy the Ti-cats. MIP will develop on its own, so unless there is some truly innovative plan to make this work, I'm not on board. If WH doesn't get built because Hostco doesn't feel that we have the necessary legacy tenant(s), I will be disappointed, but I will be able to sleep at night. The WH is still the right choice for the city, and if it dies because other parties couldn't see the potential, then I can live with that.

Henry & Joe: >>> "I would love to see a MAC presence downtown, but historically they have been all talk and no action on the issue...."

I believe that the silo effect created from the obsessive clustering of our education/medical industry complex - is far more lethal to a healthy economy than a poorly located stadium.

Maybe, this stadium building saga which has polarized our city, has a silver lining after all -- by possibly opening up a situation, whereby the taxpayer driven suburban enclave like Innovation centre, now has a real chance of filtering its economic benefits into the very fabric of a living community, and thereby generating measurable spill over effects that isolated education/research islands are simply incapable of driving.

Clustering of assets is not a bad thing, so long as they're carefully integrated and not carelessly isolated. I'm not a huge fan of the MIP in its current location as I think it is too isolated from the heart of the city. On the other hand, I understand the land requirements such facilities often require as generally they involve research labs that are unsuitable for office towers. Some of the innovation and incubation businesses can work well in an office-style environment /campus, but the large scale equipment often employed in these centres makes that difficult. Our automotive and metalurgical fabrication focus of the labs we do have commitments from falls into this latter category.

Speaking of clustering, public recreation and entertainment is also a potential cluster. The west harbour, James North galleries, restaurants, retailers, Bayfront Park, a soccer and/or football stadium, and higher density residential could all be considered part of an integrated cluster. You go because of one thing, and you stay to enjoy another.

The MIP simply isn't working for me when I look at it as an integrated cluster. I suppose if you want to invent a new product, play a game of golf, and then catch a football game, all in an afternoon, it works. Otherwise, I don't see an integrated cluster on, or even near, the Longwood site. Not to mention the selling off of MIP's front yard so a whole bunch of business owners and politicians can "save face". This should never be about saving face. Like many of us have been saying for quite some time, it should be about building a city.

I'm all for compromise, so long as it's genuinely a middle-ground compromise and not just an example of "spin again" negotiations until we get the answer Bob Young and HostCo want.

What if Bob Young brought more jobs from his business in software and internet to MIP. Just throwing it out there.

Cut and pasted from another discussion where I posted:

I am not swayed at all. WH or a renovated IWS. Why would we blow growth in an established technology incubator for a freaking stadium? Wake up folks!

If the Ti-Cats leave so what, I prefer to keep the the lands open for innovation growth which will lead to jobs growth which will lead to prosperity. Prosperity and growth were the reasons WH has been chosen over and over, if Bob The Brain isn't interested in contributing to that let him go. I also think his unseen studies and claims of operating losses are complete bullshit, let us see the spreadsheets and do some forensic accounting.

I'm afraid that this is just another step backwards.

We loose the innovation park in Hamilton, and you know where Mac will decide to put it next?

Probably in Burlington, next to their new Business School (all MBA classes are held there now. Isn't that great? All those students only have to drive to Burlington instead of actually coming into our city.

I think this is a catastrophic blunder. I would rather loose the ti-cats than give McMaster a reason to wriggle out of their employment lands plan.

"I would rather loose the ti-cats than give McMaster a reason to wriggle out of their employment lands plan."

I think that, in the end, we will realize that the Tiger-Cats started a slide into oblivion the day Bob Young wrote his letter saying they wouldn't play at the West Harbour; bursting Hamilton's Pan-Am bubble and leaving years of planning in the dust. Regardless of what happens tomorrow (and I believe there are worse sights than Longwood/Aberdeen) many of the very people that the Tiger-Cats need to attract, the young, educated and well-to-do, have been turned off for good.

Following along Mark Chamberlain's distinction, the existing Tiger-Cat fans are loyal to a "team" not a "business". But there simply aren't enough of them and they tend to be older and their support comes in the form of the purchase of very low-priced tickets. Raise the prices and they won't come. Wait ten years and they'll be dead.

And who will follow? The rest of Hamilton has watched what a "business" does when its opponent is vulnerable and they won't like it. The loyalty that is paid to a team, won't be there for a business. The treatment that Hamilton received will be returned in spades.

The CFL has been in dire straights in southern Ontario for years. It needs a new generation to embrace its game and, in Hamilton's case, its stadium. But you can't fall in love with a business and wherever the Tiger-Cats eventually play, that generation has seen enough.