A contingent of LRT supporters from Brampton and Hamilton visited Waterloo on Saturday to tour its LRT construction.

Last week, I accepted an invitation by the Brampton LRT advocacy to tour the Kitchener-Waterloo ION LRT construction on Saturday May 14. This tour was also covered in the Hamilton Spectator and Waterloo Record.

Here are photos of our LRT construction tour in Kitchener-Waterloo. 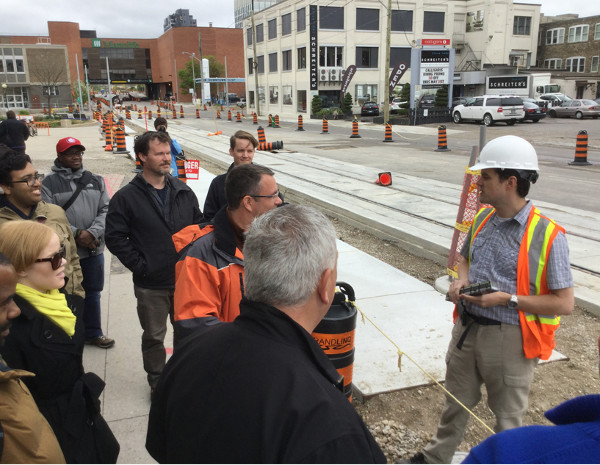 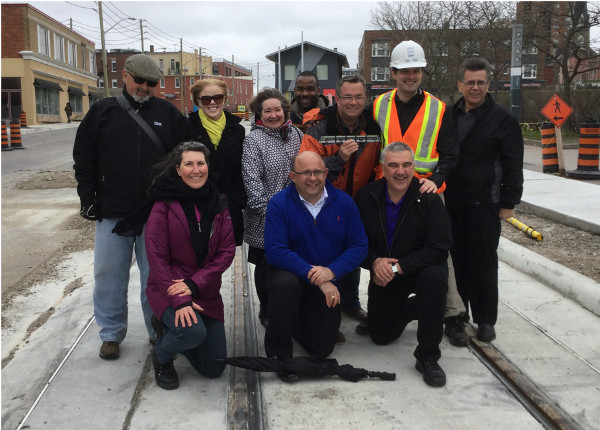 Our LRT tour opened with a meet-and-greet with Kitchener mayor Berry Vrbanovic and Waterloo mayor Dave Jaworsky, as well as Cambridge MPP Kathryn McGarry. Beaming at how successful the LRT construction has been in recruiting many new employers as well as office expansions (including Google Canada), they also explained the positive benefits in densification and real estate as well.

Pragmatically, they acknowledged that they have to bear construction towards the end, for the benefits and success. Jaworksy remarked how they are transitioning their downtowns into walkable urban cores, by around 2025. 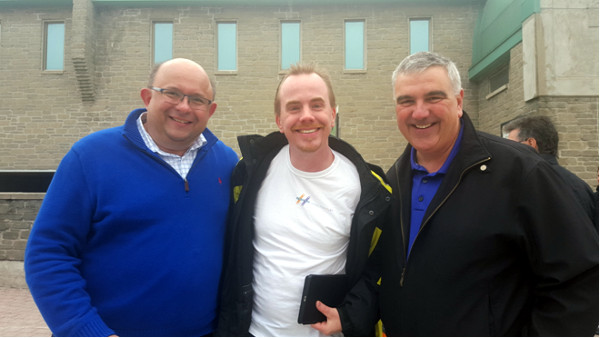 After the meet-and-greet, we took an iXpress bus to University of Waterloo, and began walking the entire LRT construction all the way back towards downtown Kitchener, taking photos along the way. 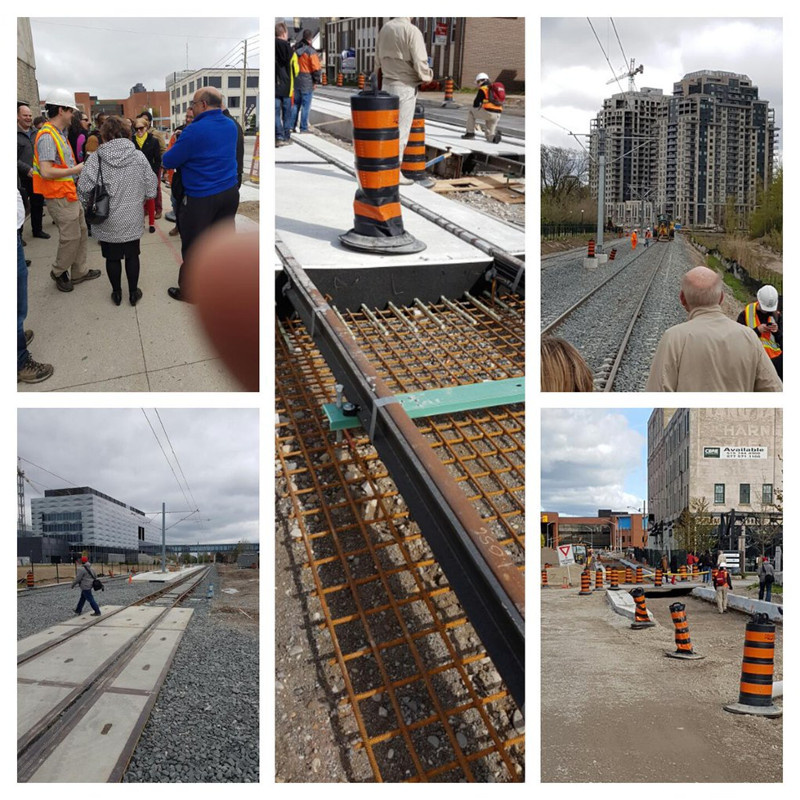 The skies started out dreary and became brighter and bluer towards the end of the tour – suggestive of weathering through construction headaches gradually towards the blue skies of construction completion and LRT operation. 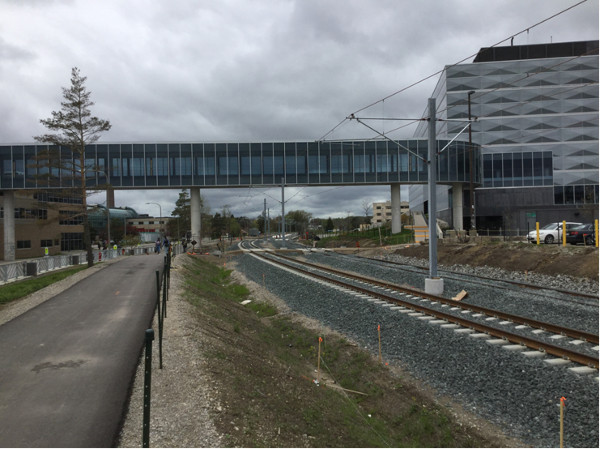 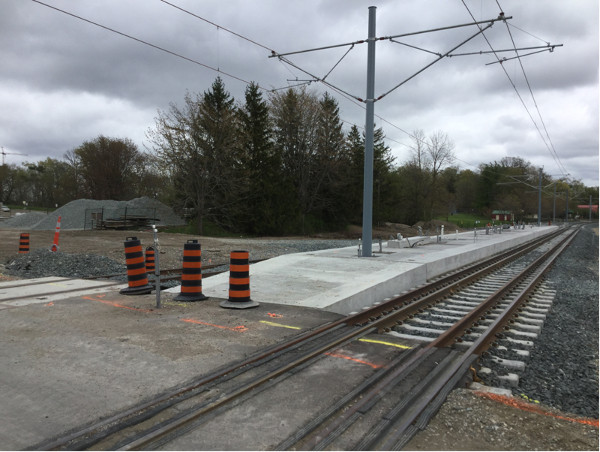 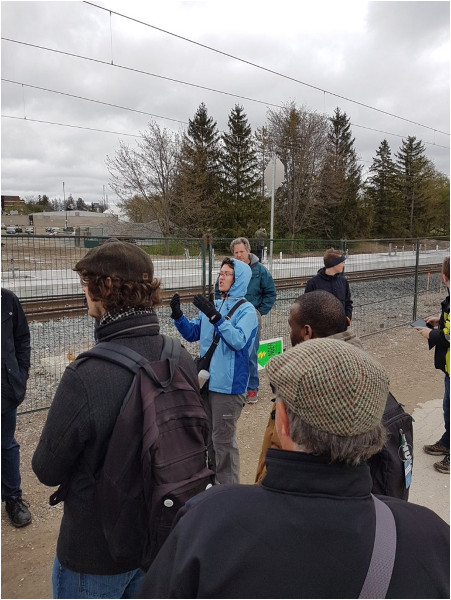 With major LRT construction, several roads are closed throughout Kitchener and Waterloo, for various time periods. Wayfinding and construction signs were everywhere along the LRT route, as to be expected. 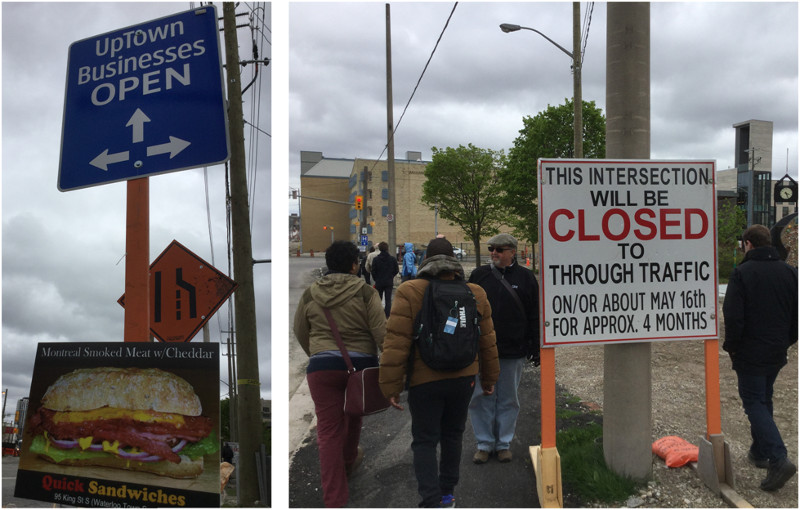 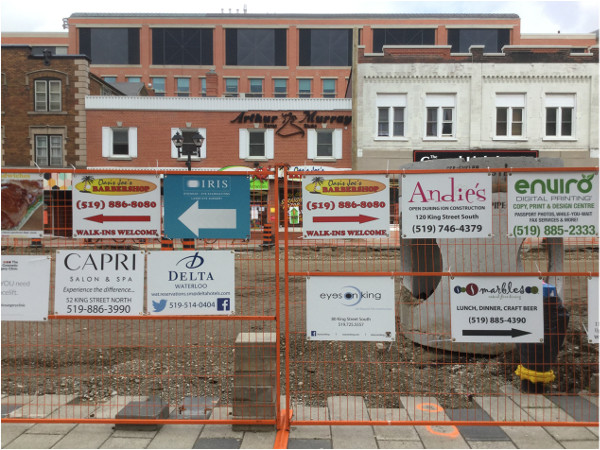 With road closures making it more difficult to access businesses, one way Kitchener has coped to is install wayfinding on construction fences. These signs were provided for free to local businesses. We should strive to do the same in Hamilton, to help our local businesses survive construction.

We know there are many local Hamilton businesses that support LRT construction (obviously, with some trepidation), and many that are against the construction. TriTAG acknowledged to our group that some business owners do decide to retire early, and that is always a preferable outcome over a business going bankrupt. Over the long term, businesses will prosper on average, so construction is a short-term pain.

There are many LRT promotions and specials occurring, and some businesses have been creative such as installing a path of pink flamingos towards their door. Some businesses have provided a “construction wayfinding map” in the corner of all their print advertisements, to show their best parking spots of the current moment.

We must learn from Kitchener-Waterloo, and play our part to help businesses survive LRT construction. 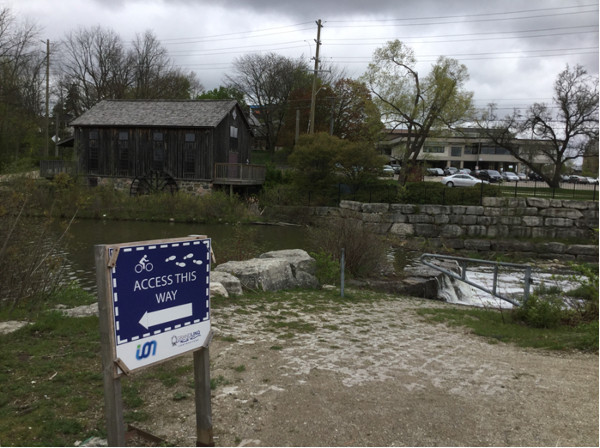 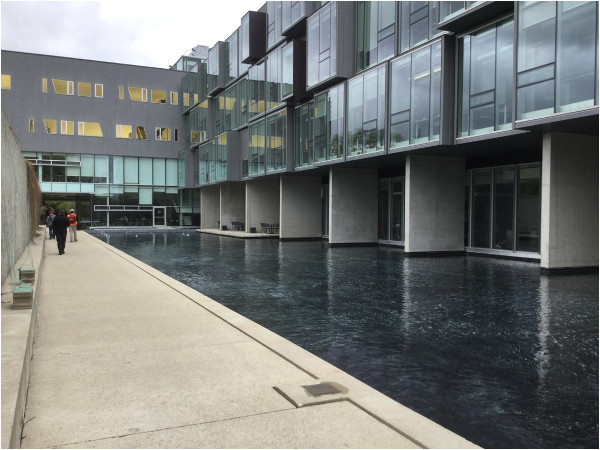 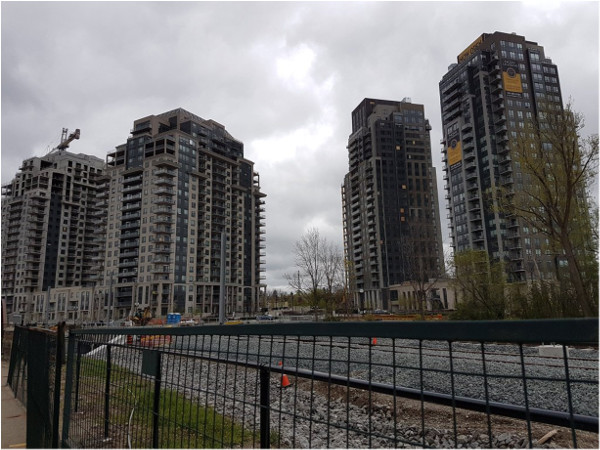 Many new developments next to the LRT route (Image Credit: Damin Starr) 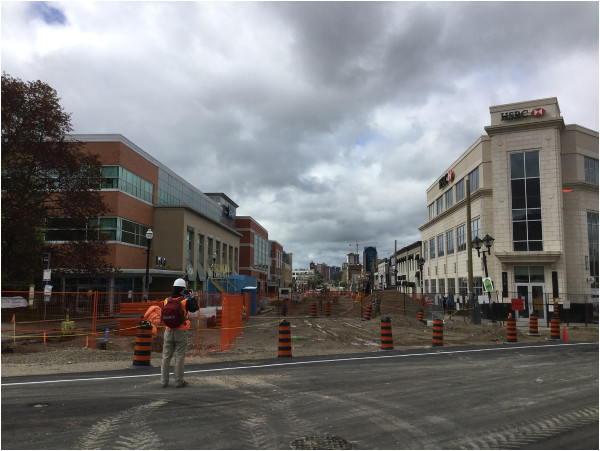 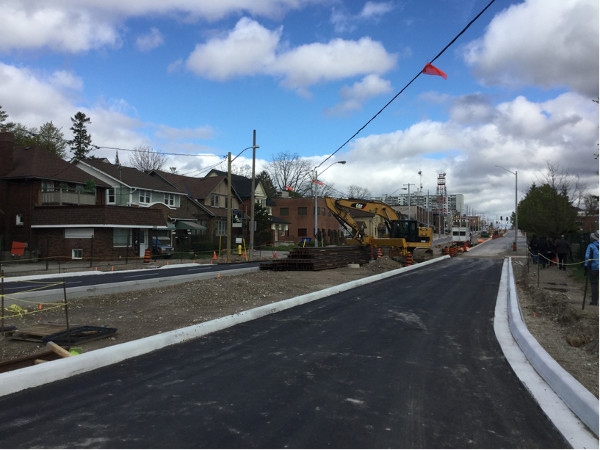 Median LRT that has not had tracks installed yet (Image Credit: Mark Rejhon) 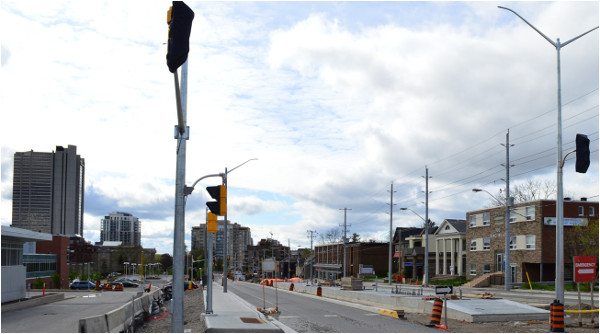 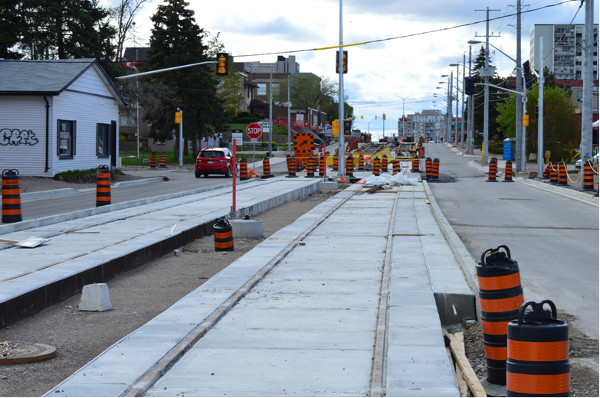 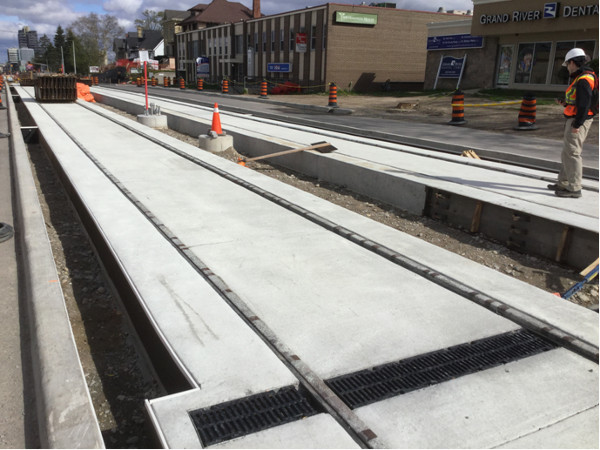 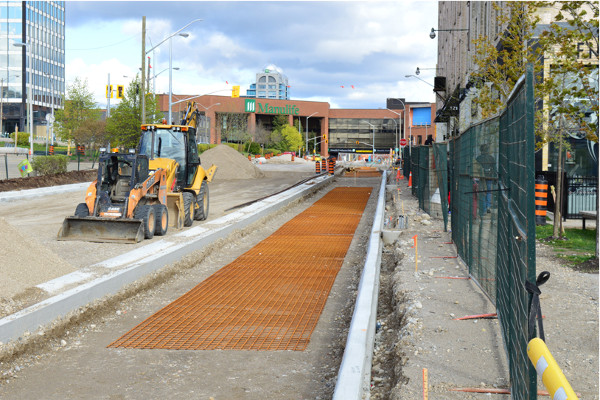 There is impressive densification occurring in downtown Kitchener as we speak. The construction, understandably is a huge mess for important progress. 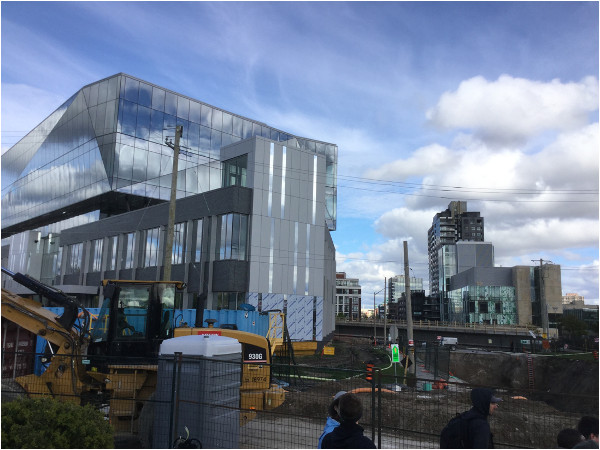 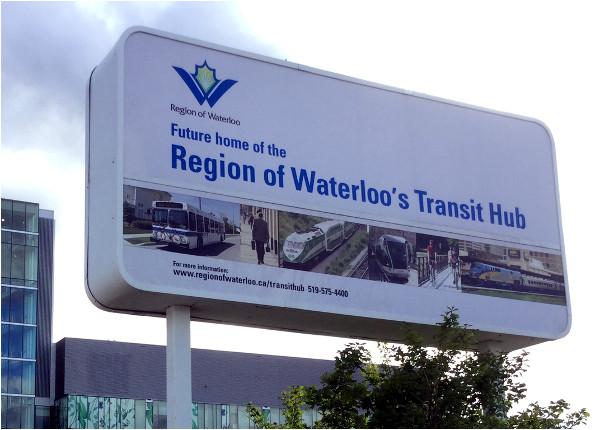 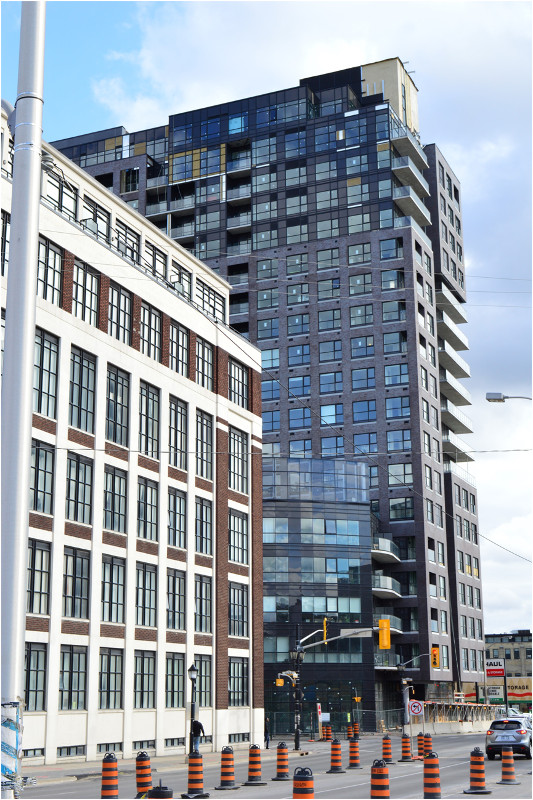 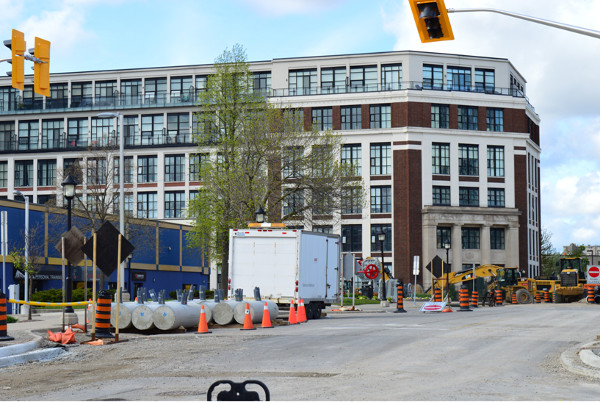 We are very appreciative of the Brampton LRT advocacy inviting Hamiltonians to join their group, on a construction tour of the Kitchener-Waterloo ION LRT. It is quite apparent that while construction can be difficult, they are going in it for the long haul and long-term economic success.

We must support the Hamilton LRT and also help our businesses survive short-term pain for long-term gain. It is very clear that LRT is both transit and economic development, and Hamilton will benefit greatly.

Tell Hamilton City Council to take YES for an answer:

I will admit I have been looking at other operations lately so I ask this question. I know they said that the Ion LRT line will be open in 2017, have they given a more specific opening date yet?

Wow....amazing. I can't even imagine what it must be like to live in a city that would invest in itself like this. Great to see all the transit oriented development springing up before the line even opens. This is consistent with LRT projects world-wide despite the uneducated ramblings from Hamilton city hall. Great work K-W!!

And K-W has to pay 1/3 of the cost itself, whereas Hamilton is extremely fortunate that the Province will cover 100% of the capital cost of our LRT.

It's nice to see the political support and leadership in K-W after their recent election where, as in Hamilton, the anti-LRT candidate was soundly defeated.

That's an important point, because here in Ottawa we to had to make some hard budget choices about the city funding close to 40% of the cost of Phase 1 of the Confederation LRT Line. As someone who lives in Ottawa, I and others looked with disgust and stunned shock when members of Brampton's council turned down free LRT money from the province. We are still here in Ottawa expecting that we will have to pay up to 35% of phase 2 LRT work ourselves. Sorry to be a little bitter but where the hell is our free LRT lines from the province! Phase 2 of the LRT program (30km of service and 19 new stations) is expected to cost $3 Billion we have budgeted that we will pay locally up to $1.1 Billion of it ourselves. That doesn't include an unfunded 2.1 km extension of the Trillium Line (the original O-train line) to the airport and a possible 4 km extension of the Confederation line east to Trim road from the current planned terminus at Place D'Orleans.

I played a small role in getting the original O-train line started in 2001. I understand fully, the hard work, high levels of angst that everyone in your organization is currently going through right now at this point! I commend everyone in Hamilton who fought so hard and so long to get the interest up to the point that you helped move your city government towards accepting rail transit. You managed to turn around the supertanker that is your city government and bureaucracy, 180 degrees to accept LRT as a policy direction, its big deal! A big achievement.

However, there is part of me that gets a little upset when I see local politicians whom have obviously not been read the "riot act" by your mayor. "Get in line, or we could loose the cash! "A sort of urban legend that prevails here in Ottawa that, the mayor had closed door meetings with all the councilors and said no one was to go against anything in the LRT file in public unless, it has been discussed here first!

I think a group of or certain individual conservative members of your council have made a "political deal" with the Conservative Party of Ontario, over this issue and maybe a few more. Its the only thing that makes sense to me. There is just too much development in K-W and here in Ottawa that, is linked directly with construction of the LRT lines. Not the operation of a complete LRT line, just the construction of the LRT lines has spawned development.

No civic politician in Ontario, no matter what ward he or she represents, no matter the political leaning, could with a straight face, turn down the development potential that both K-W's and Ottawa's LRT lines are currently spawning and say, "sorry no thanks, were just not ready yet".

As usual, a photo is worth a thousand words.

I have consistently had anti or undecided LRT opinions point to the "disaster going on in KW". Essentially your typical AM900 CHML listener (like my 70 year old father) suggesting LRT supporters should go see whats happening in KW with cost over runs and construction disruptions as an argument against Hamilton's LRT (the terms "boondoggle" "give your head a shake" and passive-aggressive insults about "Liberals" are also common).

Looking at those photos - the key element that should be obvious to anyone who cares to look with open eyes is: all the new tax $$$ coming from all those new high rise infill developments!!!

These photos should scare the shit our of Hamilton's established business community - if not our sitting council.

Hamilton is already so far behind competing Ontario municipalities when it comes to city building that supports modern business development - or in other words lifestyle - LRT has literally become a make or break project (while most of council is still talking about business parks at the airport as a legitimate modern business development strategy - because a city full of nondescript prefab boxes in the middle of a giant parking lot is exactly where my kids will choose to live sarcasm in case its not obvious).

Although in fairness to council - it is not easy to defy your voting base by taking a leadership role - trying to explain the benefits of a new Google office to a Stelco pensioner struggling to pay the taxes on their home is not going to go over well - you are speaking entirely different languages - and like it or not, its the pensioners who listen to CHML and read the Spec who vote.

I observed he appeared to be honest in these elements during the election & STILL got 2nd most votes.

If I was living in Ward 7, he'd definitely be one of the few I would have voted for. John-Paul Danko is a car-owner as well but understands.

JP, thank you for chiming in!

Hope you run for Ward 7 again in 2018. You almost won, and I really do think you would be a great ally, for the whole City of Hamilton,, to help keep LRT on track, keeping the HSR 10-year Rapid Ready plan on track, as welll as bring incremental LRT extensions up the mountain!