Happy cities are cities where urban transportation infrastructure puts people first, mitigates the effects of social inequality and respects the dignity of every human being. 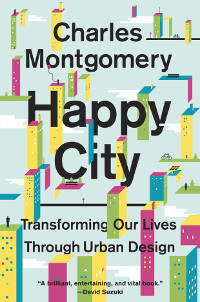 What causes human beings to be happy? And what features of city design promote happiness for the citizens of the city?

These questions are no longer the exclusive domain of philosophers and religious leaders. Today they can be answered by pollsters and social scientists. Pollsters can survey people about their moods and ask them how happy they are feeling. These results can then be correlated with what is going on in people's lives and their surrounding environment.

The results are not very surprising. It turns out that, in the words of the old camp song, "The more we get together, the happier we'll be." Human beings are inherently social creatures. Once our purely physical needs such as food, clothing and shelter have been provided for, it is social connections to other human beings that lead to happiness.

In recent years, this phenomenon has been extensively studied. One of the key works in this area is Robert Putnam's essay and subsequent book, Bowling Alone.

Mr. Putnam considers the concept of "social capital" to measure and value the networks of social ties between people. He looks at the social infrastructure of organizations that bring people together to facilitate and enable the growth of social capital.

Mr. Putnam is not the first person to write about this. Donald Appleyard's Liveable Streets provides an excellent look at the effects of car traffic on residential streets. As shown in this excellent video about Appleyard's work, the effect of car traffic is to destroy human interaction and create an environment of loneliness, fear and distrust.

In his book, Happy City, Charles Montgomery looks at the relationship between the design of cities and the happiness of the people living there. Unsurprisingly, cities that foster human interaction are cities whose citizens are healthy and happy. On the other hand, car-dominated cities where people are separated and isolated from each other are cities of deep loneliness and unhappiness.

The first is by building human capital and human connections. A happy city has a dense, walkable urban area where people are interacting with each other on the street as they go about their daily lives.

The second way that urban design promotes happiness is in showing respect for the fundamental dignity of each person by mitigating the effects of social inequality.

For example, suppose a rich person in his Rolls Royce luxury automobile is not getting from A to B any faster than ordinary people cycling or taking public transit. That shows respect for the dignity of each person and promotes human happiness.

These two ways are particularly important for children. There are very good reasons why UNICEF rates The Netherlands as having the world's highest level of child well-being. Dutch cycling infrastructure provides freedom for children that simply does not exist in much of suburban Hamilton.

Far too many children, particularly teenagers, are essentially trapped in suburban Hamilton. Public transit is poor, car drivers make cycling terrifying and few places they want to go are within walking distance. Compare that with these children cycling to school in The Netherlands. Which children have more freedom? Which children are happier?

In Happy City, Montgomery shows the relationship between urban design and human happiness. Cities where people are happy are cities where social capital is built by urban design.

Happy cities are cities where urban transportation infrastructure puts people first, mitigates the effects of social inequality and respects the dignity of every human being. Many cities have successfully transformed themselves to build human happiness. They changed for the better.

Here in Hamilton, we can too!

This reminds me of a conversation I had many years ago with a colleague in Paris.

Up until the age of about 12 or 13 he lived in central Paris and loved it. All his friends were within a short walk, there were tons of things to do within walking distance (cinema, parks, shops, museums etc.) and he was free to do this on his own. Transit was also easy and accessible for slightly longer trips.

Then his parents moved to the suburbs, so they could have a garden and more space. He hated it: his nearest friend was a half hour bike ride away (over a hill), there was nothing to do, and (worst of all) his parents started spending most of their free time working on the garden and the house (and encouraging him to do the same if he said he was bored).

Despite conventional wisdom, he was convinced that a dense city was actually a better place to raise children than the suburbs!

I had a similar conversation with a relative of mine from the Islamic Republic of Iran. He was saying that his teenage daughter would have more freedom in Tehran than in suburban Ontario.

Why? Because although she would have to wear restrictive clothing and have to be accompanied by her younger brother lest the religious police beat her up, these children could go everywhere in the city. In suburban Ontario, not so much.

When girls have more freedom in the Islamic Republic of Iran than in suburban Hamilton, that's a sign that we've got a serious problem.

Let's see. In Tehran, Iran my daughter may get beaten up for her style of clotiing. By officials of the State.

In Hamilton, my daughter may not get beaten up just about anywhere. In fact, she can go anywhere alone or not. (She did so. She is now 36 and living in the evil metropolis of Toronto - going anywhere she wishes - alone or not. Safe all the time)

Now whcih city is safer and more friendly for my daughter (and your daughters too, Kevin)? One where officials can legally attack her, or any city in Canada?

Let me know if the suburbs in Iran look like our suburbs and we can talk in an apples to apples comparison.

When I spoke to a coworker who left Iran in 1979 (and has not been back since), he said he would never want his son to go back there. What's the point? One anecdote doesn't build your case, Kev.

Very interesting and powerful story, Kevin. Certainly makes one think about the oft-cited premise that cars = freedom. Thanks for sharing.

I'm all for complete streets but think religious police might be too far to go for a safe urban environment.

You misunderstand Kevin's anecdote: the teens are not safe because of the religious police, they are safe because they are not stranded in the suburban wastelands.

Interesting! Anybody's feeling of helplessness (a girl away from home without a car) would be greater in most suburbs than urban almost anywhere, no matter where.

In other words: Apparently matters less where (even Tehran with their laws/restrictions still yet gives a greater freedom than being stuck carless in a suburb, even in the Western world).

One of my favourite books. Makes for a great read and the message is a plus to boot.

Why further suburban development should be banned.

Lonely, afraid, unable to trust? Convinced all of your troubles can be blamed on G.M. Ford Motor and Chrysler? Are vulnerable, impressionable children looking to you for a powerful example?

Seek out a qualified psychiatric professional-peddle over there as fast as your feet will take you-, therapy and medication may improve your condition, you owe it to the children.