Harper Government is Terrified of Data

There are freak accidents and there are systematic failures, and the question of whether a given incident is an example of the former or the latter tends to become politically charged.

Consider last year's rail disaster in Lac-Megantic, Quebec, which killed 47 people and destroyed over 30 buildings spanning half of the town centre. Both the Transport Safety Board [PDF] and independent analysis [PDF] find that the disaster is the result of a systematic failure of regulatory oversight by Transport Canada. 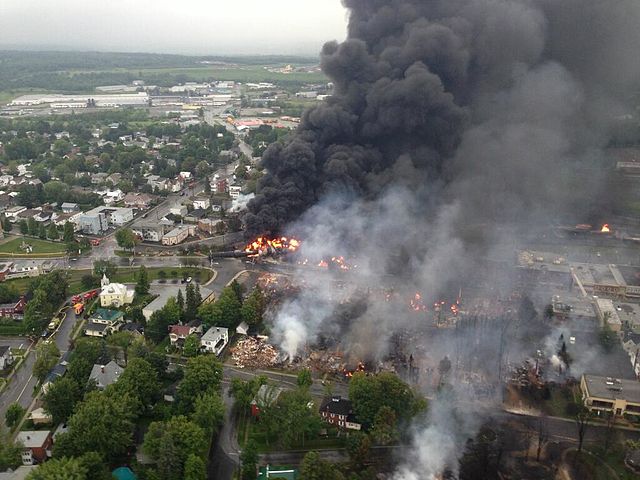 Even though the now-defunct Montreal, Maine and Atlantic Railway Company had a poor safety record, Transport Canada granted the company an exemption from the rules to allow one-person crews on trains carrying dangerous cargo.

The company was allowed to use old tank cars to transport crude oil even though transportation safety authorities have warned for years that they were at risk of puncture and explosion.

The rules themselves are vague and open to interpretation, and Transport Canada provides severely curtailed oversight and enforcement. The authority doesn't adequately collect or share data on dangerous goods movement or audit the self-regulation of rail companies.

Worst of all, the regulators at Transport Canada are overly sympathetic to the industry's hostility toward regulation and oversight, a hostility shared by the pro-business ideology of the governing Conservative Party.

Despite all evidence to the contrary, Transport Minister Lisa Raitt insists that the rail industry can regulate itself just fine through "voluntary standards" and better training, and that the Lac-Megantic disaster was the result of individual bad actors.

Raitt is advocating a classic train-and-blame response to a systematic problem in a high-reliability industry - a strategy that assigns culpability after the fact but is fundamentally unsuited to the prevention of preventable disasters.

Don't expect this government to answer the rising chorus of demands for a more comprehensive independent rail safety inquiry. They know that it would uncover the extent of the systemic failures that led to the Lac-Megantic tragedy, failures that strike at the heart of the government's laissez-faire ideology.

The Government's nothing-to-see-here approach to rail safety closely parallels its approach to the shocking rate of murders among aboriginal women.

On August 17, the body of 15-year-old Tina Fontaine was found wrapped in a bag and dumped in Manitoba's Red River.

Fontaine grew up in Sagkeeng First Nation and watched her father struggle with cancer before he was beaten to death in 2011. Before her disappearance on August 9, she was in the care of a Child and Family Services agency and had run away several times.

Tina Fontaine's murder is not an isolated incident. According to the RCMP report Missing and Murdered Aboriginal Women: A National Operational Review, 1,017 aboriginal women were murdered between 1980 and 2012.

Aboriginal women are grossly over-represented among murdered women in Canada: they make up only 4 percent of Canada's female population but 16 percent of female homicide victims and 12 percent of missing women.

What do all these tragic murders and abductions and disappearances have in common? According to Stephen Harper, nothing.

Each murder is an isolated incident, a one-off crime, a matter best left to the individual police investigation.

Our prime minister is not interested in why an aboriginal woman in Canada is four times as likely to be murdered as a non-aboroginal woman. The very question smacks of sociology, which Harper regards as a dirty word.

By Harper's logic, we should just assume it's a blind meaningless coincidence that, year after year, aboriginal women are murdered at four times the rate of non-aboriginal women.

To be sure, there is some debate over whether a Royal Inquiry per se is the best way to uncover actionable answers to the question of why aboriginal women are so much more likely to be murdered than non-aboriginal women.

However, that is not the reason for Harper's opposition to that particular way of answering the question. He opposes the question itself.

The Harper Government is terrified of data. The reason Harper reflexively denies that individual behaviour happens in a context - the changeable social, economic, cultural and environmental framework that helps shape our choices - is that it absolves his government of any responsibility to address that context meaningfully.

It's not a broken regulatory structure, it's just a fatigued operator working for a careless company. It's not a systematic pattern of marginalization and abuse, it's just the work of isolated criminals.

This is why the government killed the long form census. Evidence drives policy, and if the evidence contradicts the ideology, your choice is either to change the ideology or suppress the evidence.

We know which choice Harper and his government have made. And we have the void of evidence to prove it.

Making the Canadian census 'voluntary' (rather than its former status of being mandatory) is a case in point.

You won't be expected to address something, like social inequality, poverty, disenfranchisement of segments of the population, if you don't collect statistically valid data.

Great article, Ryan. I completely share your thoughts. Another good article in today's Toronto Star is in the same vein. Agreed that yet another inquiry probably isn't going to accomplish much, but actually acknowledging the systemic racism and violence that aboriginal women face is a good step towards considering solutions (which, much to Harper's chagrin, will necessarily involve government acting, not just police detachments throwing paperwork into the "unsolvable" pile).

This is what drives me crazy about the modern conservatives. If they were merely law-and-order small-government fiscal conservatives, I still wouldn't agree with them but at least I could respect them.

But the attack against the inward eyes of the government is indefensible.

Also, since we're talking about aboriginal issues the government is studiously ignoring:

It might be nice if you looked at the per capita numbers. The way you framed it people might think that the chance of being murdered as an aboriginal woman increased from 1980 to 2012 when in fact it went down due to population growth. I'm not sure if you did that on purpose or what.

There is nothing misleading or inaccurate in Ryan's statement, and it supports the argument being made. The per capita rate of homicides for both groups went down over the period being observed. The population grew for both groups. The number of homicides increased less than overall population growth. The underlying statistical relationship between the two groups is what matters. The per capita rate for aboriginal women fell less than for non-aboriginal women. They were already more likely to be murdered than non-aboriginal women, and that differential grew from 1980 to 2012.

What are you trying to argue?

If you read that statement carefully, it says what it says--call it editorial prerogative. You could frame the statement any number of ways, but it doesn't change the fact that a) aboriginal women are murdered at a much higher rate than women as a whole, and b) more Aboriginal women were murdered in 2012 than in 1980.

I can't really understand why anyone would choose to frame these observations in per capita terms, save to try to minimize or obscure this shameful state of affairs. If you thoughtfully unpacked per capita rates, it only underlines how much of a sociological problem this is: while the number of female murder victims in Canada has dropped per capita, the much smaller per capita reduction for Aboriginal women can be almost entirely explained by population growth, not a reduction in violence.

So per capita #s are misleading because violence against aboriginal women is still increasing while it is declining for women as a whole. Something is going on here, and it's not just a criminal issue.

"Our prime minister is not interested in why an aboriginal woman in Canada is four times as likely to be murdered as a non-aboroginal woman."

I'd first want to know what happens if we compare socio-economic apples to apples. That is, how much of this resolves into a problem of 1) murder of poor women and 2) native poverty?

This is one difficulty with data-driven social policy ... you don't get nice tidy answers.

Your question is better posed by thinking in terms of whether rates of homicide differ based on income level or a composite measure of socioeconomic status and whether these differences differ significantly between social groups (aboriginal/non-aboriginal, visible minorities/non-visible minorities, youths/non-youths, men/women, and so forth).

The danger, of course, is that rather than trying to better understand a complex problem seeking to drill-deeper into data can lead to policy inaction, or in some cases is a tactic used for stalling and obfuscation.

Just the sort of thing we might learn in a formal inquiry.

For every murder there is a murderer. This article looks at the ethnicity of the victims, but I do not see any such analysis of the perpetrators.

Compared to other crimes, murder tends to have a fairly high conviction rate. There are a variety of reasons for this. These reasons start with murder having a higher rate of being reported to police in the first place.

With the $21 billion of new development in Toronto, concentrated primarily in the core, one can only guess what a tragedy awaits in the future in downtown Toronto. Let's hope the conservatives or whoever is in power recognizes such a potential disaster a starts looking at the data and making it safe for all those people living in the downtown core with so many more to follow.

Ryan, this is excellent. Thanks. It's worth reading this article in light of the C.B.C. article on the federal government's monitoring of Hamilton's protests (http://www.cbc.ca/news/canada/hamilton/news/federal-government-monitoring-hamilton-protests-since-2007-1.2770349).