The evidence clearly demonstrates that cycling becomes safer the more people engage in it - and this is also true for pedestrians.

A new fact sheet by the European Cyclists' Federation titled Safety In Numbers [PDF] demonstrates that higher rates of bicycle use result in lower numbers of casualties. The reason is that cycling is safer for each cyclist when more people do it.

The concept of 'Safety in Numbers' is not new. It was first demonstrated in 1949 by Smeed with regard to motor vehicle use when data from 62 countries showed that road fatalities per vehicle were lower in countries with more driving. The relationship - an exponential curve - has become known as Smeed's Law and has stood the test of time well, being verified in examinations of data across 42 years in the UK and 110 years in Australia. As can be seen in the below graph of Walking and Cycling in California, it can be just as easily adapted to cycling figures which show a perfect 'Smeed curve'"

I found this fact sheet by following a link from a Guardian article proposing that the so-called "Zil Lanes" in London, currently dedicated to Olympic athletes and officials, be converted into bike lanes once the games are over.

Although I've known this for a while, it is really amazing how much absolutely (not just relatively) safer cycling becomes as more people cycle:

These figures need to be widely publicized, since anything that decreases the rate of cycling will likely lead to increased fatalities (and certainly increased relative risk) - and of course, the reverse is also true.

The fact sheet also cites a fascinating study showing that increased numbers of pedestrians crossing at intersections lead to large reductions in relative risk of pedestrian injuries. The study was carried out in ... Hamilton!

Leden also examined police reported injuries to people walking at some 300 signalized intersections in Hamilton, Ontario, Canada. The number of collisions increased with the 0.32 to 0.67 power with increasing numbers of pedestrians. That is, where there were greater numbers of pedestrians, fewer pedestrians were involved in crashes.

In Hamilton attempts to make our roads more convenient and attractive to pedestrians are often rejected on the grounds that Hamilton is exceptional: what works elsewhere won't work here. This attitude is especially surprising when you realize that Hamilton data has actually produced some of the most widely-quoted research on pedestrian safety at intersections and one-way streets!

I don't really want to get into the helmet debate, but epidemiologically speaking, helmet laws that lead to reductions in cycling (or slow its growth) will certainly lead to increased rates of injury.

This seems like a paradox until you realize, as noted by the European Cyclists Federation, that it is driver behaviour (along with road infrastructure) that is the determining factor for injury and death rates for cyclists.

[N]ot only are policies that increase the numbers of people walking and cycling a good way to improve safety, but laws should be revised to reflect the premise that the number of collisions with vulnerable road users is determined largely by motorist behaviour.

More cyclists lead to motorists being more respectful, accepting and aware of cyclists on the roads. Cyclist behaviour becomes normalized and more predictable for motorists. This has what has happened in places that have seen big increases in cycling: London (UK), New York, Denmark, and the Netherlands.

The single most effective way to make cycling safer is to increase the number of cyclists. The evidence over whether helmets even make cycling safer for individuals in the low-speed crashes typical of commuter cycling is itself unclear, and the safest cycling country (Denmark) has very low rates of helmet use, but very high levels of cycling overall.

That said, I always wear a helmet when cycling in Hamilton and encourage others to do so, but I didn't when using the Velib' in Paris and almost no one else does. 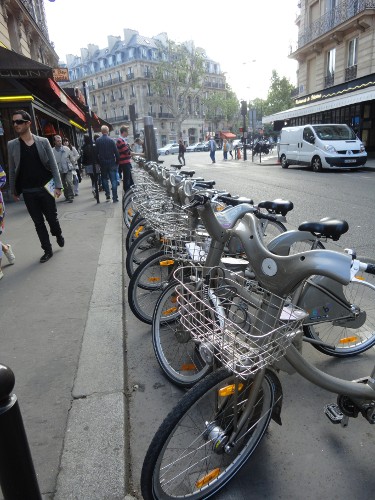 It should be noted that in Holland the door prize is virtually unheard of. Why? The solution is so simple that is laughable. Drivers (and passengers) are trained to open the car door with the opposite hand. This causes you to turn around and look at oncoming traffic before opening the door. Next time you get out of a car try it. Such a simple idea, yet frightening in it effectiveness. Sometimes it is the simple stuff that make the most difference.

Imagine: A Hamilton that has physically separated bike lanes throughout downtown, connecting with the vast trail system, where people on bicycles, wheelchairs, and rollerblades could move and BE PART OF this beautiful city. Families could safely zip down to parks, go to the farmers market, take in a show, stop and do some shopping. People on dates could ride to restaurants and parks. This would tie together all the points of nature, culture and commerce and draw so many people from GTA. Not only would this be great for Hamilton's commerce and tourism, it would be great for all those that live in the city who get to experience more of it. Let's share the roads.

No way, then it might take a few minutes longer to get through the city from the QEW to the 403 in a car.

And maybe with more cyclists on the road, drivers on campus would start to look before making U-turns (sans signal) from the right-hand lane. That's my fourth collision - or near collision - in less than year.

Sorry for the anectody rant - I'm still calming down from a (soft) collision five minutes ago.

I love my bike. I love cycling. I love Hamilton. But, crikey, it can be dangerous biking on these streets when drivers aren't paying attention.

I currently live in Hamilton, but work as a bike messenger in Toronto so I spend alot of time on a bike. Hamilton scares the bejeezus out of me while Toronto is so much safer for a cyclist and its because they expect cyclists in Toronto, there are more of them. Main street and King street are death traps, nothing more than extensions of the 400 highway system. It should be a priority for Hamilton to create and bi-directional separated or raised bike lane that goes from stoney creek to McMaster. Build it on either Main or King by taking out a lane. It will slow traffic, and increase cycling. And why do the bike lanes in Hamilton go nowhere, they just end.... the Dundurn one doesnt seem to connect to anything it just stops at main and leaves you to face the most dangerous section of traffic in the city. You want to increase cycling rates you have to make it inviting and safe. Hamilton is scarey and I'm an expert!

The Mountain has that east west cycling connection that the lower city lacks. There is a 2 metre bike lane on both sides of Stone Church. Sunday morning I rode that from Omni Drive in the West to Pritchard Road in the East in twenty five minutes, with a tailwind and four stops for red lights. Of course, when you have done that you have gone from one Home Depot/Chapters-Indigo/Cineplex to another ie nowhere, but that's beside the point. You have crossed town on one road, in a beeline. The bike lane continues on Stone Church to Mud and then into the suburb north of Mud, but I didn't follow.

Except for a stretch of Lawrence Road from Gage over to the Red Hill Creek, there is nothing comparable below the Mountain. All the connectivity is given to the passenger vehicles. But Cannon would be a better candidate than Main for a through line, I think. Better still would be the CN main line, just north of Barton.

The report doesn't separate cause and effect. Surely where it is safer to cycle, more people will cycle.