Lessons for Today from Pre-Contact Civilization at Cootes Paradise

Archaeologist David G. Smith examines how pre-contact cultures lived off the land at Cootes Paradise. What can we learn today from these early people?

How did pre-historic cultures live off the land and produce food for their communities? This timely topic was the subject of the final lecture of the RBG Speakers Series by archeologist David G. Smith. "Timely?" you may ask. Yes, indeed, timely.

Today, in North America, we primarily exist with the parameters of a highly urbanized monoculture industrial complex. We drive everywhere, plug into our energy-sucking gadgets, and allow ourselves to be bombarded by media from a thousand different sources. We buy food produced several continents away, consume medications that were packaged overseas and purchase products that are manufactured by factories offshore.

All told, this large scale corporate globalization of our lives has increasingly encroached on our personal day-to-day resilience and individual capacity to survive. As a result, the whole idea of pioneering 'self-sufficiency', in the truest sense of the word, is now considered at best 'quaint', at worst, 'backward'.

Yet reality strikes. Most everyone knows that our collective home, the planet, as a result of our unrelenting excesses, is 'stressed-out'. We take, we take, we take - with very little thought of the short or long term consequences. Climate change, power outages, (let alone nuclear fallout), hang over our heads like menacing death scepters.

Overall, as a species, we have collectively 'lost our way'. More than ever, we need a sustainable 'return to our earth roots'. We need to re-establish our immediate local connection to the land, air, and water that daily sustains us.

So, yes indeed, Smith's lecture is timely. In order to move forward, we really must take a good hard look back. Consider this short illustrated video to put our current situation in perspective:

Now, imagine an unnamed verdant marshland flush with freshwater fish, turtle, muskrat, beaver and wild fowl, an adjacent land mass redolent with wildlife like squirrel, rabbit, deer and bear. Imagine the seasonal cycles of nature that nurtured and recycled all these species. Imagine the wind, the rain, the cold, the heat, the sun, the cycles of birth, decay and death.

Now imagine small families of humans gathered on the shoreline of this marsh. Here, they camp. Here, they hunted. Here, they gathered food substances from the marsh to nourish their growing children. Small groups, mobile and totally self-sufficient, they survived.

Their survival was based on an intimate knowledge and appreciate of how the land, waters and skies worked in concert. They learned and applied generational skills that allowed them to responsibly interact with these natural processes. They knew Nature and, moreover, respected it. Lesson No. 1.

Lesson No. 2. They planted seeds.

Enter Professor David G. Smith, an archaeologist specializing in pre-historic cultures of northeastern North America. Much that follows, and much of what he spoke of during his lecture of 'pre-contact' culture on May 31 at the RBG, has been extracted and paraphrased from a previously published lecture of the same name that he co-authored with Helen Haines in 2011.

In summation: The Princess Point promontory in Cootes Paradise, (one of the most biologically diverse areas in Canada), represents one of the earliest known human settlements in the area. This site was frequented over a period of time starting approximately 9,000 B.C. until A.D. 1650, with the heaviest period of occupation occurring during the 'Early 'Late Woodland' Period from 500 to A.D. 1500. This period is now referred to as the 'Princess Point Culture'.

As a bit of background for the unfamiliar: Cootes Paradise Marsh is located at the extreme west end of Lake Ontario, adjacent to Burlington Bay (an embayment at the west end of Hamilton Harbour). The wetland was named after Lieutenant, later, Captain, Thomas Coote, a British military officer who frequently hunted waterfowl in the marsh. Cootes Paradise is at the nexus of the Great Lakes-St. Lawrence biome and the Carolinian forest zone.

It is a deciduous forest zone that, prior to European clearing, consisted of large stands of beech and maple trees. The larger area encompasses a distinctive range of Carolinian flora and fauna, and the wetlands are an important staging habitat for a wide variety of migratory birds.

Princess Point was named after the current Queen Elizabeth II, and is now situated in The Royal Botanical Gardens.

Wild rice was a dominant wetland plant species in the marsh from at least 2,000 years ago until about 800 years ago. Wild rice was a grain commonly foraged by early hunter-gatherers. After that time, wild rice in the marsh declined while cattails increased, as evidenced by the quantity of pollen deposited in the peat that underlies the marsh.

Although the Cootes Paradise Marsh and the Princess Point promontory have been a part of the European-colonized landscape since the late eighteenth century, it was only in the latter part of the twentieth century that archaeological excavations began. Prior to the twentieth century the marsh was a separate "little lake" as recorded by Lasalle's scouting party when he first visited the area in 1669.

A hundred and seven years later, in 1776, Lady Simcoe described the area as a "marshy tract of land" that attracted a wide variety of wildlife. - A paradise, indeed, for hunting humans.

At present, there are two theories about how people came to plant corn there. The first suggests a migratory invasion by the maize cultivating Iroquois over the Algonquin speaking hunter-gathers. And the second, more popular, theory suggests a more gradual 'in situ' development that emerged through a growing trading knowledge of seeds. Harvested maize kernels eventually replaced wild rice as a food stable.

Corn is easier to harvest, offers more diverse food-making options and has longer lasting storage qualities. Princess Point has the unique distinction of revealing, through carbon dating, the oldest known maize in all of the Northeast of America. These round pellets, unlike our current corn, is a direct descendent of 'Northern Flint' maize originally cultivated in Mexico.

Archeological evidence in the form of maize kernels and pottery shards confirm that by A.D. 500, natives were growing and storing maize as a supplement to their existing regime of foraged resources.

Even so, it is clear that the Iroquoian continued to return to this wildlife abundant marsh to both fish and hunt long before the full-on European invasion of the 1700s.

Fast forward to today, well, almost. Clearly we are not going to revert to bows and arrows, muskrat stew or feverishly pound down our own corn meal. How then do we proceed?

Lesson No. 3. We must agree, as a 'local tribe', to embrace the necessary transition to a better balanced relationship with planet Earth. Consider this recent English initiative, InTransition, founded by Rob Hopkins.

In Hamilton, we too can transform ourselves to 're-connect' to the natural world that daily sustains us. For starters, we can plant our own veggies as our ancestors, native and non-native, once did. For the uninitiated, there really is nothing like dirt under your fingernails to make you feel a part of Nature, not apart from it.

Pulling a fresh sun-warmed tomato from the vine is primal and authentic in a way that a supermarket forage never can be. At the very least we can once again support local food growers by buying their fresh produce from local farmer's markets. We can walk or cycle to our destinations in the downtown core, and simply stop to talk in person for more then a minute with our friendly neighbours and curious colleagues.

Enjoying these timeless simple daily pleasures, re-discovering our 'local roots' in this convivial social way, will help lead the NEXT generation to a better future then our own.

Imagine how much better ALL life on the planet would be if we celebrated 'Earth Day Every Day'.

Dear Readers, after submitting this story to RaiseTheHammer, I heard from David Smith, archeologist, about one little factual error. It has been corrected here:

"Princess Point has the unique distinction of revealing, through carbon dating, the oldest known maize kernels found in all of the Northeast of America. These round pellets, a direct descendent of maize originally cultivated in Mexico 5000 years ago, eventually evolved into ‘Northern Flint’ maize, the precursor of what we now know as local ‘corn’ today."

Have a great day!

Thank you for this.

What a nice change of pace!

I never tire of hiking around Princess Point or places further afield like Crawford Lake etc. Not unlike cities, I always get a great sense of history when I'm in nature.

Thanks for the fantastic article.

We are stardust, golden, etc.

Fascinating, informative, delightful and timely; This article was a mouthful for me. I sure wish I could get my hands on some ancient kernels preserved in the bowels of this marsh. You can bet I would plant them in a community garden next season not long after March. 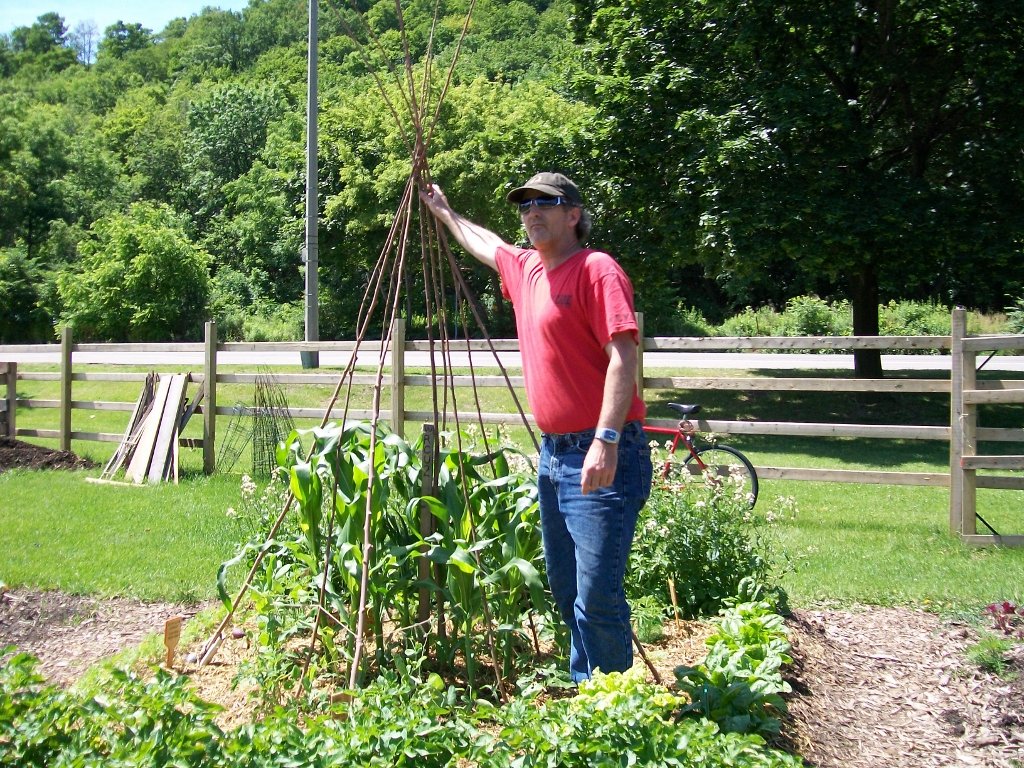 Knee high by the 4th of July? This Dent corn was hip high by June 14th.

Gage Park Community Garden will be open to the public during the Spec's Open Garden Week on Saturday June 30th and Sunday July 1st (IT's Your Festival Weekend see Thursday's Spectator for details). Everyone including artists, authors and even archeologists are welcome to attend. I hope to see y'all there. Cheers

Thanks all. Kind words very much appreciated.

And @WRCU2 - This Canadian seed bank may help you out. Northern Flint isn't listed as such, but that's not to say 'descendents' are around. Just avoid any and all Monsanto 'patented' cattle-corn hybrids. You might do better visiting an old time farmer in the area and buying an ear or two for next spring ... :) Very good corn can be had at Parkside Farm on Parkside Drive, Waterdown. He plants, harvests & sells from the barn.

I appreciate the info ML Holton although I already know about GMO scorn. The variety of corn I grow is best suited for milling but does have a wonderful flavour if you don't mind chewing. I am stockpiling the seed from this maize for sustenance in them latter days (Post-Contract Civilization).

IT is interesting, yesterday I spent most of the afternoon drumming with new friends at the Hamilton Regional Indian Centre during their 40th birthday celebration. We were served a delicious Indian Corn soup for dinner which consisted of corn, kidney beans and salted pork. The soup was so meaty I could have ate IT with a fork.

This old adage is ever true - 'Farmers Feed Cities'. The link between the two cultures is essential. Locally, we can increase our own city's sustainability by buying local food produce.

Lots to learn from Native Elders: past, present and future ...

Sustainability, agriculture, local economics very much on the table during this transitional period...