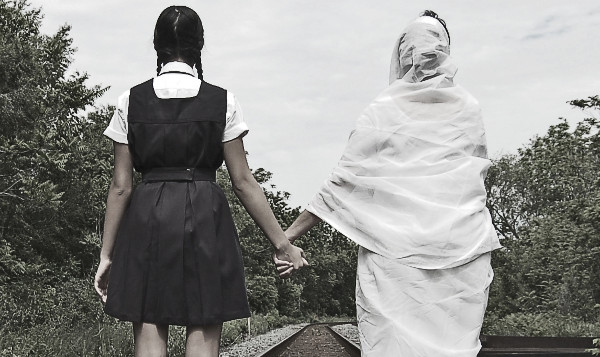 Within the first minute, it is clear why Rukmini's Gold won the 2015 Toronto Fringe Festival's New Play Contest. Radha Menon's dialogue is crisp, clear, vivid, and musical, and it mines the depths of human character and characterization. This would be clear from any couple of pages of the script or if you stumbled in randomly and watched a couple of minutes of the show.

On stage, the little old lady, exquisitely played by theatre veteran Dia Frid, comes across as vulnerable, empathetic, and wholly believable. She is, after all, the archetypal grandmother, an elderly woman everyone can identify with, across race, culture, nationality, and time.

Moreover, the old woman is in trouble. She feels alone and invisible, and looks like a ghost in her white sari. We see her despondent on a deserted platform, burdened by a decaying suitcase (metaphor for life's journey) and an old jewelry box as a train leaves the station. She has missed her train. And we have already bonded with her, with her predicament, regardless of what in heaven or hell might have brought her to this point.

A 12-year-old girl (Sindhuri Nandhakumar) appears. "Can I sit beside you?" she asks the old woman. "I'm going with you."

Who is this impudent girl and what does she want of the old woman? Let your imagination loose. This is one of the show's enigmas. Given its format, the two scenes that feature the old woman and the girl, of necessity, bookend the play.

Radha Menon has an uncanny ability to make us empathize with almost every one of her many characters-good or bad-that we meet in her story, and, indeed, we are introduced to some pretty ambiguous and even unsavory characters. Yet they are all rendered complex, never one-dimensional, and we truly feel for them.

A wooden bench sits centered on a bare stage throughout the show, throughout its many stand-alone scenes.

The action jumps backward and forward in time, covering more than a century in the lives of the certain diaspora members of an extended Indian family. All scenes take place at train stations situated in India, Uganda, the United Kingdom and in Canada. From the old woman's point of view: are these scenes real? Are they imagined? Do they happen in the past, or do they portend the future?

The old woman (Dia Frid) remains on stage throughout the ninety minutes of the play, sometimes ignoring, sometimes seemingly paying attention to the action in the vignettes, sketches, or scenes, call them what you will. Individually, they are beautifully conceived and executed, heart-wrenching, each one complete with its own inciting incident, turning point(s) and climax. Direction (Wes Berger), and acting are uniformly impressive, meaningful and virtually flawless. A joy to watch.

This particular presentation attempts to unify Radha Menon's otherwise disjoint collection of stories in a number of ways: the presence of the old woman on stage throughout, the contents of her jewelry box showing up here and there, and the action rooted at railway stations. And at least one character in each scene belongs to the old woman's extended family.

I say "attempts to unify," because the attempt didn't work for me. I was distracted by the woman's presence, the central action being otherwise so powerful and engrossing that her presence was simply distracting, and most of the scenes could have equally taken place elsewhere than at train stations.

Like a cake that is too rich, the density/intensity of the drama was overwhelming. It quashed for me any discernible pattern or overarching arc to the 90-minute collection of stories. Just about every angle of human behaviour, from altruism and love through racism and hate are shoehorned into the available time, albeit superbly.

There's enough conceptual material here: with further development, expansion, unification, who knows, this work could be turned into an award-winning TV miniseries. Rahda Menon has a gem in her hands.

See her show in its present form while you can. I'll wager we haven't seen the last of her brilliant saga.