The demolition of two historical importance buildings facing onto Gore Park is on hold according to a press release issued by Councillor Jason Farr and Councillor Brian McHattie's office. 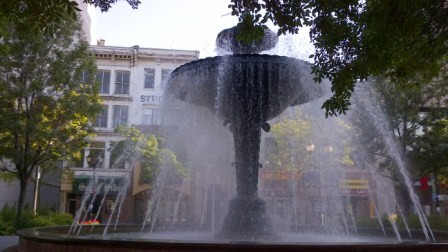 July 9, 2013 - Hamilton, ON - Early this afternoon, Councillor Jason Farr, Mr. David Blanchard and his representatives, city staff from Planning & Economic Development including Heritage Planning, as well as staff from the City Manager's Office met. At that meeting Councillor Farr requested and it was agreed that any demolition would be stopped on the 24, 28 King St. Gore Park buildings as a solution is sought to maintain the architectural and heritage character of the Gore properties. This interim step allows time for continued community input, as well as dialogue between Mr. Blanchard and city staff.   Furthermore, staff has also requested that an independent peer review be done of the engineering report undertaken by the owner of these properties as an immediate next step.

"I want to thank Mr. Blanchard for his willingness to seek a solution", said Councillor Jason Farr.  "There has been a significant focus on citizen input and engagement the last little while and it is important that it be considered in our decision making process."   "Gore Park is important to this entire community. I remain committed to finding a solution that allows us to maintain the architectural and heritage character of Gore Park while also trying to move forward with this exciting project," added Councillor Farr."

This certainly good news but I believe the community must continue to voice its concerns that Hamilton's heritage must be given respect and protection by developers and Hamilton City Hamilton.

Tonight, the Tourism and Culture Division at the City of Hamilton is holding a public session from 1-4 pm and a facilitated session from 6-9 pm at the LIUNA Station to inform and engage citizens about the Downtown Hamilton Built Heritage Inventory Study.