Community Engagement Should be an Ongoing Conversation

We cannot continue to keep treating engagement as an exercise that happens once or only around one issue and then stops abruptly.

Community engagement has been at the heart of the work I've been doing for a while now. For me, engaging with my community has been a joyful learning experience that continues to prove how welcoming and accepting Hamiltonians are. It's been my experience that when you genuinely ask someone for their input, they genuinely want to tell you their story.

I've also learned that it's not hard to get Hamiltonians to tell their stories. When Hamiltonians get together, we talk about Hamilton. We care deeply about our communities, our neighbours, and our City.

And we want our City to mirror that affection.

At the moment, too much of the engagement that we're part of as residents is through "straw polls" or one-time PIC (Public Information Centres) meetings and not through genuine dialogue.

We can do better, Hamilton, but only if we demand it of ourselves.

Even when the City engages as the result of a requirement, such as when new developments are moving forward, this often means only notifying a small group of property owners.

In almost every case, that notification comes in the form of a complicated, wordy, intimidating legal document that few can interpret or understand and which almost always has a fast-approaching deadline. Few people have the time, access, or knowledge required to respond in a manner that could possibly get the City's attention.

And let's not forget, this only applies to property owners. Tenants are not legally entitled to be notified.

Some critics of this argument have suggested that large signs are posted in our neighbourhoods to let us know about proposed developments and that anyone who walks by is able to find out what's happening.

Sadly, when you examine these signs you find out that they really aren't very useful. Like the notices that are mailed out, the signs are written in an unclear language that's not accessible.

Even worse, the signs no longer contain the meeting date, even though they used to. That's right: the signs are literally posted to announce a meeting and don't include the date of that meeting.

If we can't schedule a date for a meeting before a sign goes up, then we're not serious as a City about making sure people can attend a meeting. Residents need to schedule time off work, since the meetings are set for 9:30 AM, and that's not something most employers are willing to accommodate at the last minute. 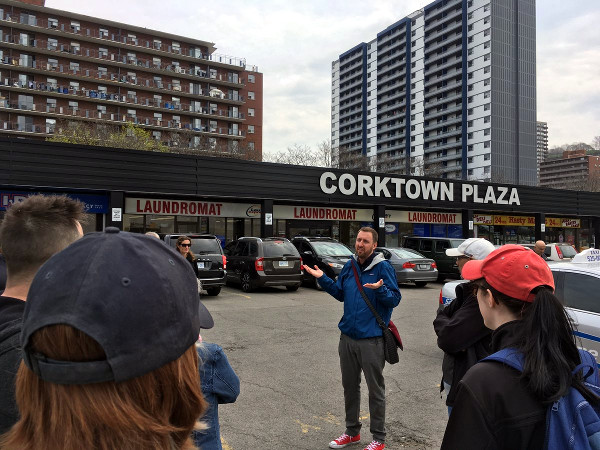 Cameron Kroetsch leading Jane's Walk on the future of Corktown, May 6, 2018

Not Just About Site or Rezoning Applications

A completely different example of this kind of lopsided engagement can be seen in the situation surrounding the Queen and Herkimer intersection on the border of Wards 1 and 2.

To put it mildly, there have been a lot of collisions and near-misses at and around this intersection. I stood out in the cold this past winter with a bunch of other people in an effort organized by Tom Flood, a parent and activist who lives in the area, to bring awareness to the speed at which cars travel down this stretch of road. 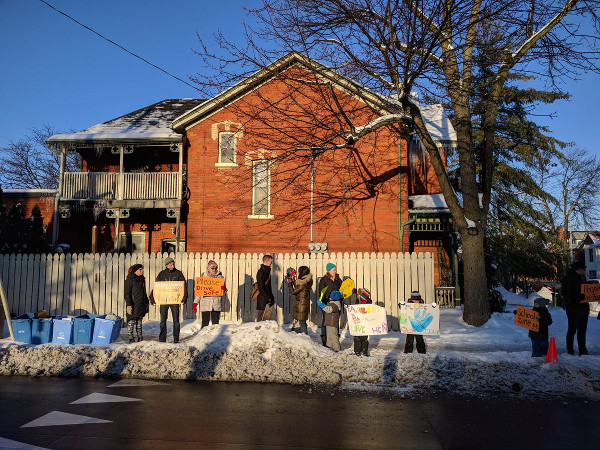 While that demonstration was effective in getting people to slow down, it was the culmination of an incredible amount of frustration, activism, and volunteering. Rather than implementing sweeping changes to redesign the intersection immediately to protect the people who use the area, the city continued to institute incremental changes, some temporary, in an attempt to mitigate the problem.

Residents went to sleep one night, months later, and woke up the next to a series of bright plastic bollards in the intersection. It was quickly obvious that they were installed in the wrong place (in the bike lane, in one instance) or that they literally weren't able to stand up to the speeding traffic.

An easier path to engaging residents would have been to check in with the community to see if this solution addressed their concern, not to assume that it did.

What I've tried to describe is what I see as the often reactive and non-collaborative approach to civic engagement.

It isn't a secret to anyone that there are dangerous intersections and streets all around the downtown. But rather than lead with a purpose and vision, our City expects us to volunteer our time to do all of the heavy lifting and problem solving.

When a solution finally does emerge after an exhausting public campaign, it's not communicated to the people who fought for it but quietly installed in the dead of night to avoid any possibility of collaboration.

This isn't to say that engagement only happens this way but I think it's important to provide some concrete examples of the types of things I hear from residents every day. They're all tired of the silent treatment.

Despite this, there is a motivated and vocal group of residents who do attend City meetings, write in to the City, and organize their neighbours.

While individuals engage on their own, It's often a neighbourhood association (NA) that does this work - and on a volunteer basis, I might add. These volunteers go around knocking on doors in their neighbourhoods, gathering up documents from City Hall, scrambling to organize meetings, and generally doing their best to represent their neighbours. But it's really not their job to do this work.

Considering the vast amount of change happening in Hamilton that calls for community engagement, it's not possible for NAs to stay on top of everything.

The City has come to rely on these volunteers to pick up the slack, to fill in where the City underfunds its engagement strategy, and to speak for entire neighbourhoods. NA meetings have become the de facto go-to place for City politicians to do "straw polls" so that they can go back to a City committee or even City Council to declare support or opposition.

The truth is, and anyone involved in an NA will tell you this, that NAs don't represent entire neighbourhoods and they don't have the resources that the City of Hamilton has - a city that has the 10th largest population in the country.

It's the Little Things that Kill

There are some simple things we can do to start to fix this problem, today:

One Big Thing We Could Do

All of these little things will help, but not unless we start to understand the iterative power of engagement. We cannot continue to keep treating engagement as an exercise that happens once or only around one issue and then stops abruptly.

Engagement is a dialogue. It's about planning the next opportunity to talk to residents, figuring out new ways to engage people, and leading boldly to make this happen.

Are we already doing this sometimes? Yep. We definitely are. There are brave and passionate City staff breaking the mold regularly. You know who you are.

To our City politicians, let's stop being so afraid of our shadows. We can insist on meaningful dialogue without putting our ambitions for reelection ahead of what's right for the health of our neighbourhoods.

I'm Not an Expert

I don't think I'm going to show up on a horse with my white cisgender privilege to save anyone's day. I do think, though, that we can work together with the community to come up with a better model.

There are lots of great groups in Hamilton (and some outside of Hamilton) who could help us with this and who we could listen to more often. Here are just a few that I've been lucky to get to know:

If the City needs help or suggestions about how to engage, they should reach out to the amazing professionals who do this work on a regular basis.

Residents want to be part of decision-making and they want to be kept up to date about what's going on in their neighbourhoods.

While I don't think we have an easy path ahead as civic leaders, it has to start by taking a serious look at why and how we engage residents and who continues to benefit from that engagement.

Raise the Hammer has a longstanding policy of not endorsing candidates, and this article should not be regarded as an editorial endorsement of the author. However, all candidates are welcome to submit articles for publication. We will accept any submission that does not violate our submission guidelines. Raise the Hammer is a free, volunteer-run publication that does not charge money for access to content and does not receive any revenue of any kind, including for commercial or political advertising.

You can find all of our municipal election coverage on our elections website.