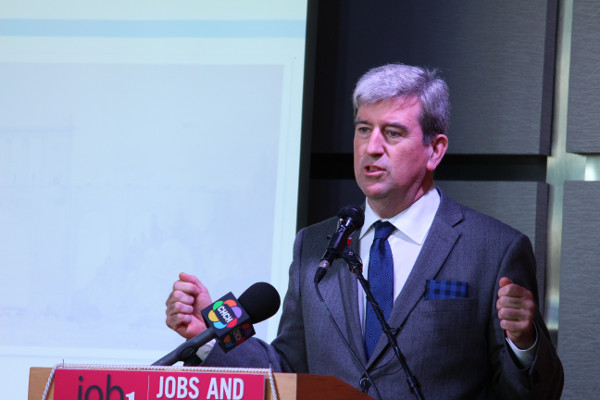 On the same day the budget was released, Ontario NDP leader Andrea Horwath announced that her party would vote against it and Premier Kathleen Wynne asked Lieutenant Governor David Onley to dissolve the legislature and call an election on Thursday, June 12.

Murray's statements, posted yesterday on Twitter, come in the early days of a provincial election campaign.

. @RyanMcGreal I laid out the way forward when I spoke 2 the #Hamont Chamber. I have said Province would fund it. MLX would negotiate terms.

@RyanMcGreal To be clear. A Liberal gov't will fund 100% of the capital costs of the #HamOnt proposed rapid transit line. 1/2

Funding for #HamOnt's Rapid transit project will be drawn from the GTHA region transit fund as described in the budget.

@RyanMcGreal As we committed we will electrify the GO lines to #HamOnt & provide #HamOnt with 2 way,15 minute GO service.

@Metrolinx will develop the business plan with #HamOnt consistent with Big Move & Places to Grow plans.

He referenced his recent speech at a Hamilton Chamber of Commerce luncheon, in which he stopped just short of saying Hamilton would be crazy not to commit to LRT, saying it would be inappropriate to tell Hamilton what to choose between LRT and BRT.

Every thing I said at the Chamber of Commerce in #HamOnt about working with the city to maximize job creation & investment also stands.

Everything I said at the #HamOnt Chamber on city choices & options stands. Too much to repeat here. #RER15Min is new. Rest was explained.

Last try. The specific & detailed commitments I made in the @hamiltonchamber speech stand unchanged. I chose my words very carefully.

However, the Hamilton City Council has already chosen LRT.

In February 2013, the City submitted its comprehensive Rapid Ready transit plan to the province. The centrepiece of the plan is an east-west LRT line running from Eastgate Square to McMaster University combined with improved bus service and, in the longer term, a north-south rapid transit line running on James Street and Upper James from the waterfront to the airport.

The Rapid Ready plan is based on the assumption of full capital funding for the LRT line, which was the basis on which Metrolinx was developed to coordinate Greater Toronto and Hamilton Area (GTHA) regional transit projects.

The Province promised to fund rapid transit in Hamilton in June 2007, when they released the original MoveOntario 2020 plan.

The Ontario Liberals reiterated that promise in a pre-election press release that September, when they more specifically warned that "two light rail lines across Hamilton" would be "at risk" if the Progressive Conservatives won the election.

Ever since the 2011 Provincial election, Liberal candidates in Hamilton ridings hedged their words when asked whether they would honour the commitment to fund LRT, noting the Liberals would "work with the city to move this project forward" once the Rapid Ready report was complete.

Five years in the making, that report was unanimously approved by Council in Februay 2013 and submitted to the Province, but Premier Kathleen Wynne surprised Hamilton LRT advocates this past February when she indicated she did not know whether Hamilton has chosen BRT or LRT.

Now LRT has become a political football being kicked around both the current Provincial election and the upcoming Municipal election.

This past April, before the Ontario Budget was released, a spokesperson for Ontario NDP leader Andrea Horwath confirmed that Horwath "reaffirmed her longstanding support for a LRT for Hamilton." (Horwath is the MPP for Hamilton-Centre.) The NDP have not yet released a platform outlining a timeline or funding arrangement.

The Progressive Conservative Party, in contrast, opposes LRT in Hamilton. Instead, they would spend $1.5 billion on a mid-peninsula highway running from Fort Erie across Hwy 403 in Hamilton to connect with Hwy 401 or 407 noth of Burlington.

Locally, Councillor Brad Clark (former Progressive Conservative Transport Minister under Mike Harris) voted to support LRT throughout the planning process from 2008 to 2013. Now, as a Mayoral candidate, Clark opposes LRT, saying he is "reading the tea leaves" and believes the Province will only fund BRT.

Councillor Brian McHattie, also a mayoral candidate but an LRT supporter, wants the Province to clarify what it means by "rapid transit". He is also calling for the City to increase its public engagement on LRT after the consultation period ended in 2011. (Disclosure: I have done some volunteering with McHattie's campaign.)

Former mayor and mayoral candidate Fred Eisenberger also supports LRT but is calling for the city to "hit the reset button" on rapid transit planning and establish a citizens' forum made up of residents from across the city to evaluate the evidence and compare options.

The city already established a rapid transit citizens' advisory committee (RTCAC) with 23 residents from across the city, which held meetings from September 2010 through late 2011 and made recommendations as part of the rapid transit planning process.

It's come to that for me as well. I'm convinced that LRT is the single best way to positively transform our city.

Maybe, and perhaps this is being foolishly optimistic, RT means both LRT and BRT, LRT for B-line, BRT for A-line???

If that's what they planned, that's what they'd say. When a politician is intentionally vague about something, it's because they're giving you the worse option, otherwise they'd brag and draw votes by touting the better one specifically.

Timing is everything. If that's what they've planned, then they could announce it closer to election day. I'm sure you noticed the 100% announcement came after the election was called.

So if the liberals aren't elected does the funding still hold?

70 minutes via high-speed rail from London to Toronto, or 6o from Hamilton to Toronto via an electrified Lakeshore line?

Any council decision to revisit or change plans on rapid transit should be postponed until after the provincial election. To debate it now is just a waste of time.

The only reason council should reconsider their position is if a change of government alters the level of funding. If the PC's win we will get nothing, meaning start from scratch and see what the city can afford on its own.

If the business case is solid, you could argue that 50 years of debt financing makes even a $800m project feasible as a go-alone.

Easy to promise transit goodies ... I can list off several iterations of this for the Toronto area since the 1970s. Anyone remember GO-Urban or Network 2011? I'll believe the minister when the various promises are actually built and operational. Until then they are just promises. We still don't have anything near consensus on how to fund Metrolinx sustainably ... maybe that should be an election issue. Of course, that would require the Liberals or NDP to explain where the money will come from (I don't think the Tories are particularly interested in "the Big Move", so i can't see them engaging in a productive discussion about transit funding).

Here is an idea. 100% funded by the users! if its going to be the be all and end all it will pay for itself in no time!

I'm with Jason. If you think everything should be 100% funded by end users, then apply that to across the board and see how far that gets you, especially when things are cross subsidized or the subsidies are hidden.

Also you might want to consider that it is more cost effective to provide mass transit for people who could switch out of cars then build extra road capacity (remaining motorists benefit from the modal shift too, btw).

good the 75% of my income that goes to taxes income, sales and property will pay for all I need with lots left over!

75%? You pay a lot of tax. Putting aside your made up number do you really think you get nothing in return. No water, sewage, roads, schools, healthcare, nothing ... Vote Hudak. Obviously he's your man.

sounds great. And to be consistent with your idea let's add tolls to all freeways so users can have the privilege of also paying 100% there too.

So following your logic, we should implement a policy where only the services you use are the ones you pay for!

taxes on gas and autos including licences do pay 100% for the roads, plus for a great deal more

It's remarkable how many arguments against LRT could have just as easily applied to the Red Hill or the Linc.

also remarkable how all the people who praised Red Hill like it was Hamilton's saviour are opponents of LRT. I have a feeling all of their fiscal responsibility and need for decades and decades of repetitive studies won't be mentioned if a new highway to Wellandport comes on the table.

Jason, are you anti-RHVP? Are you not happy that the amount of trucks moved out of the core and onto the ring road we have set up now is not helping your precious walkability and complete streets myth?

Seems pretty clear that the liberals have been running interference behind the scenes for a while now. Paying 100% gets them a big win, but they can only afford BRT. What to do? Get the local liberals to obscure the issue at the municipal level setting the stage for

(Whoops)... the province saving money while giving Hamilton exactly what they asked for.

It does look suspiciously like that, doesn't it? Hopefully the Liberals' BRT FUD-spreaders on the mountain and east/Stoney Creek will be soundly defeated (and I'm a Lib).

...I was more referring to the current mayor and the former mayor.

Bratina for sure, but Eisenberger is a conservative, or was.

So lately, you've been twitter-fighting and email fighting:
- The current mayor
- This guy
- another councillor on the mountain

It just seems like you're really combative right now, Ryan. Why is that?