Vrancor now plans to preserve part of the west side of the old Revenue Canada building at 150 Main Street West as part of a new structure.

According to Ward 2 Councillor Jason Farr, Vrancor is now planning to restore part of the old Revenue Canada building at 150 Main Street West. 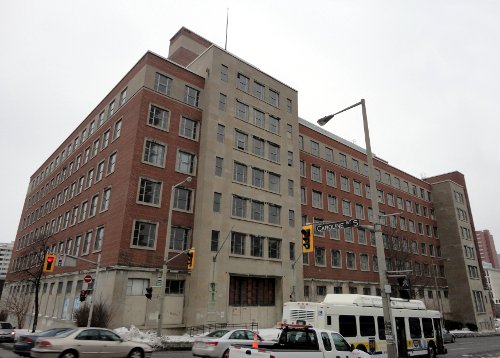 Councillor Farr followed up this evening in an email to RTH providing more detail on Vrancor's plan. "The west side (includes the Main portion) will be preserved. The glass design [for the new building] will be attached to the east side."

In addition, "Three stories above the preserved portion will be added (glass). They will be residential units (condos v rental, not yet decided)."

As for why Vrancor has decided to preserve some of the original building, Farr muses, "My safe assumption is that the developer sees the value in preserving this section."

Earlier this year, controversy erupted around Vrancor's plan to demolish 150 Main Street West to make room for a 140 unit, 20-storey condominium on the site.

At the February 1, 2011 Planning Committee meeting that considered Vrancor's request for a demolition permit, Councillor Terry Whitehead pointed out that the Federal Government sold the property to Vrancor along with a covenant committing the owner to "conserve, protect and maintain the heritage features and characteristics" of the building and "not to raze to the ground or otherwise demolish the entire building located on the lands."

Vrancor president Darko Vranich signed the covenant when he bought the property.

Tim McCabe, General Manager of Planning and Economic Development, argued that it was not the City's job to enforce the covenant, as that was a matter between Vrancor and the Federal Government.

The committee voted against the Heritage Committee's recommendation and granted the demolition permit.

The next day, Government Services Canada sent a letter to Vrancor stating that the building must not be demolished. The letter reads in part:

Please be reminded that the Government of Canada sold the property with a covenant that runs with the land in perpetuity which, in addition to protecting certain designated features and facades, requires that you and subsequent purchasers not 'raze to the ground or otherwise demolish the entire building'.

On February 11, Councillor Farr held a joint press conference with Vranich in which he announced that Vrancor intended to remove and preserve Bradford's bas-relief friezes.

Vrancor originally bought the property from the Federal Government in 2004 for $1.2 million. Since then, the developer has proposed several plans to renovate the existing building into condos but never followed through.

During the interim, the building has served as an illegal storage facility for hotel mattresses and furniture. In August 2009, the City levied a $10,500 fine against Vrancor for violating the Ontario Fire Code.

In the meantime, the company has assembled a large, contiguous package of land between Hess, Main, Bay and King Streets - including the site of the former Hamilton Motor Products (HMP) automobile dealership, which was demolished in November 2007.

I'll believe that he'll actually do something with this building once it actually happens. As far as I'm concerned, Vranich is an absentee landlord douchebag.

I hope they don't have a "whoops" while renovating this and we end up with Rokbar Lofts instead.

I really like when modern glass towers incorporate older facades in their design. If Vranich can pull this off it might go a little ways towards redeeming his reputation in Hamilton.

Wasn't Vranich supposed to break ground on Phase One of his much ballyhooed "$100 MILLION CONDO EXTRAVAGANZA" in June??? Well, we're well into June and nothin's happened except some "breaking news" from Farr about yet more preservation plans?? Build the f**kin' thing already!!

Things got put on hold when the feds told Vranich he wasn't allowed to demolish the federal building.

Yeah, but Vranich just announced he's incorporating part of the building into the new plans...so what, now we wait another year or two until the next big announcement regarding this development?? Give me a break...

He has my support, but not my confidence.

So what happens to the Holbrook sculptures? I'm confused.

Weren't the sculptures granted/donated to the city back in February? Is this new proposal going to incorporate them into the building? Do "we", the city, give them back to Vranich after he donated them to the city to appease critics?

I would assume that he would keep them on the main side of the building. The problem with the sculptures is that they have that green corroded metal from the flagpoles above streaking through them. I think this could be a good compromise if it's done right, especially since the backside of the building is in terrible ill repair.

I'll believe it when I see it, but I have faith.

some really good news here, and a message for future planning. Whatever or whomever made the fed attach this covenant to this building did a brilliant thing for the city. This will force Vrancor to design this building with some thought into the surroundings, and also with a streetwall close to Main. This should be policy for any govt property transaction (ie the education building!)

Hopefully his criminal son denis does not touch this, they owe so much money to other investors it is not even funny anymore. Word on the street is that people are going to collect as well!

Posting as anonymous, and you have a 'word on the street' comment.... Who are these scary people, and are you one of them? Newsflash! Lots of people owe other people money.... Just look at the state of the city and world. We all overextended, but at least someone borrowed a little more in order to generate something for this city... What have you done lately?

Why is a councillor making announcements on behalf of a private company? Why aren't we hearing this news from Vrancor themselves- I would assume the company has a spokesperson? Councillor Farr is free to communicate however he chooses, but doesn't he worry, based on the developer's track record, that he's delivering potentially inaccurate information?

If I decide to preserve the historic veranda on the front of my house, will Councillor Farr be there to tweet about it?

In reply to your initial query, I would forward same to the previous occupant of the Ward 2 chair, who thrilled us all at a little rally in Hess Village last summer with wondrous news of big big plans for the West Harbour area. (Remember the doffing of the jacket, and the dramatic reveal of a tee shirt swaddling that bony old frame?) How nice that the money has found a successor apologist.

Let's wait until we see final design renderings as the project evolves to see if the facade will still be incorporated.

Seems they will stay

how does someone who has no political experience get elected? How can people be so blind? As always, he will be silent, he will never upset his money donaters, period.

he grows as a person while shafting the rest of hamiltonians.

his sob stories go no where,

Right...so no one should ever try to run for office the first time.

Perhaps some of you were at the same Council meeting I attended last year where then-Councillor Bratina actually handed out a Vrancor brochure advertising the development on the land bounded by Caroline, Main, Bay and George.

Commenting about a potential development is one thing, but appearing to act as a sales representative for Vrancor, a private corporation, by handing out glossy marketing literature is quite another. This wasn't an engineering report, this was official sales literature. For me, it was inappropriate, to say the very least.

Neither Mayor Eisenberger, nor any other Councillor, called Bratina on it.

At this rate, the next thing you know certain Councillors will be handing out brochures to their colleagues for the next Tim Horton's franchise opportunity.

How can this be? The optics seem rotten. Do you have any info on Vrancor's success projects?

Their website mostly advertises their success at Hotel design. I think they also operate the Beaver & Bulldog restaurant franchise. Now that is something I'd love to see downtown. A Beaver and Bulldog instead of the awful service/food at Waltz. That or building one over one of the countless parking lots in the core.

Seems it has begun today...