The ABCs of Love with Adult Baby Cupid 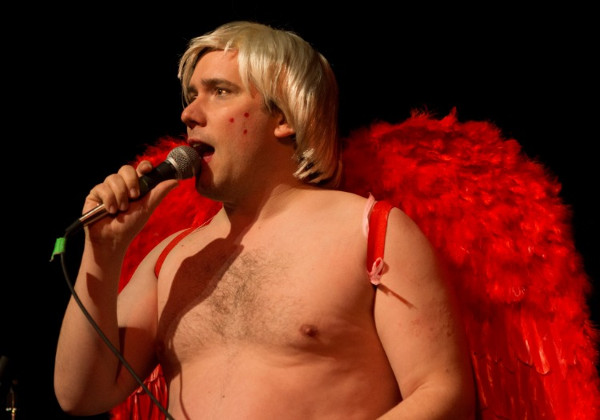 The ABCs of Love with Adult Baby Cupid

This show was not my cup of tea. When it played in Toronto Fringe festival a few weeks ago, NOW critic Christopher Hoile called it a "mixed bag". Mixed indeed. The piano playing and singing of Kristen Mueller-Heaslip is truly lovely, but probably not strong enough to stand out on its own. Still, it was quite enjoyable to listen to her fill the void of the pre-show auditorium with her tunes. She seemed to be somewhat unresponsive to the audience, however. Whenever they applauded, she cut it off quickly with another show tune, like the audience being there was just a disturbance.

Some time later, Adam Bailey appeared on stage in adult diapers and under-sized feather wings attached to his back. He spoke in an affected voice and would have us believe that he is an adult baby cupid. He got right in the face of audience members, making for a very awkward experience, one which I did not appreciate or enjoy.

At some points, the actors refer to their show as a variety show, at other times a clown show, and near the end they admit that it lacks plot. To me, it seemed more like a lecture with some musical interludes, but I have to admit, I'm not sure what kind of show it was.

Ostensibly, I believe the main purpose of the show was to teach the audience about consent in the #metoo age, but there was so much going on that I could be wrong on that. There was a moment when the audience was reminded that women were once property, and that romantic love was an invention. It was totally unclear to me, when two members of the audience were brought on stage to read a script about consent, if I was supposed to be educated, or if it was farce.

Although the show did acknowledge that it embraced a Western-centric, hetro-normative view of love, it really felt limited in its viewpoint. The beginning of the show started with some lip-synching to canned music, and seemed to engender some kind of sympathy for confused males.

Meanwhile, on the pulldown screen, portraits of disgraced Hollywood brass were flashed across the screen. This included Bill Cosby and Harvey Weinstein, both of who are currently facing criminal charges. It's a little trite to conflate these men with confused males for my taste, even if it's done in jest.

Also, the show seemed to add on a conversation about cultural appropriation, but only long enough to satirize it. Again, I was left confused. What, exactly, was the point? Perhaps it was to fill space, as the show was billed as being 80 minutes but had a runtime of closer to 60 minutes.

In the end, reviews are only one person's opinion of a performance on a particular night. There are some reviewers out there that found more value in this show than I did, like Mooney on Theatre. To me, Cupid's arrow missed the mark, as I was left me bewildered and bemused, despite the accomplished music of the show. Still, kudos should to be given to any theatre artists who have the courage to come to Fringe and take big risks.