While I was enjoying my daily constitutional with a co-worker, we noticed one of those prohibition signs outside the doors to the Farmers' Market on York Blvd between Park and MacNab that lists all the things one cannot bring inside the building - rollerblades, bicycles, and pets. 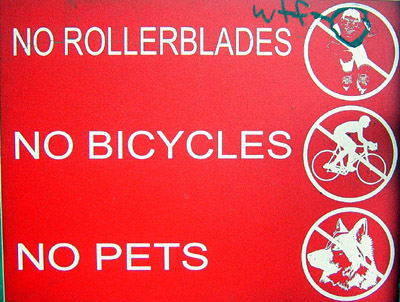 Sure enough, closer inspection reveals something mighty peculiar about the rollerblader depicted inside the prohibition sign. 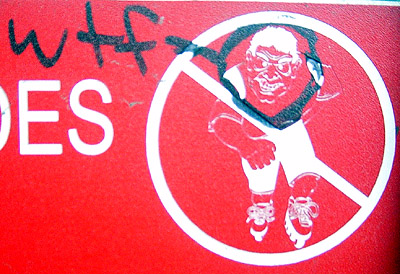 Rollerblader: furious at being balked and fleeing from authorities?

Look at the swooping forehead, the furrowed brow, those blazing eyes, that fearsome grimace of pain and rage. Is it some kind of goblin? George W. Bush at his impeachment proceedings? Councillor Merulla finally fulfilling his promise to 'come after' Councillor McHattie?

I mean, what kind of psycho would rollerblade through the market, anyway? 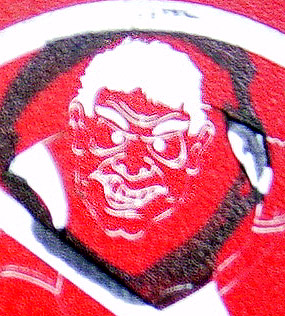 Seriously, check it out next time you're downtown.

If you have any found gems to share, please send your photos and accompanying text to editor@raisethehammer.org. If it makes us laugh, scratch our heads or shudder in mortal terror, we'll post it on the Hammerblog.

That is a menacing image. It's not very fair or objective to skaters.

Agreed that the Farmers' Market isn't the correct place for boards, blades or skates, but there has been a 'Street Surfing' culture for over 4 decades now that evolved from early combos of boards with skates, to inline skates, to the current boards.

It's quite obviously Not going away, it's just getting more techy, & popular.

The simple solution would be to just designate, design & pour more concrete skater parks.
(Simple enough until the Insurance Companies get involved with any City Park! They are probably the reasons that you don't find many diversified kinds of City Parks. They may throw out a loud, "NO!" at any park that doesn't cater to organized sports. If there is an organization behind the team sport aspect, it becomes far more insurance friendly. This is probably the reason that Cities shy away from skate parks, dog parks,& pretty much any kind of parks that deal with individual sports & activity, but not teams with organization behind them. They don't want to deal with potential liability, & the fact that no designated times for recreation can be enforced with these kinds of parks.)

No, I don't think this is right or fair. It severely limits what kinds of activities are available to a large number of people. If we have no skate parks etc. & refuse to designate areas on public land for them, they will simply not be available, unless somebody makes their private land available. Skaters/boarders will continue to skate & do stunts in none-designated areas until that time, & longer if they can't get to that park, or they cannot afford it.

Insurance companies run far too much of our private & public lives as it is, but that seems to be the way people want it. If they get hurt, they seem to want to be compensated for the injury, even if they brought it on themselves.