Daniel Johnston at The Underground 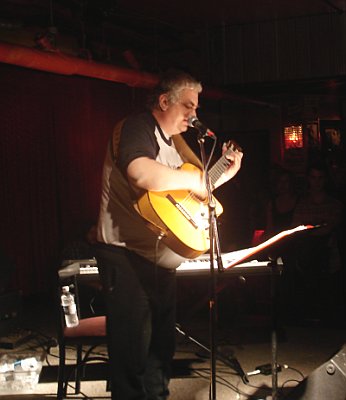 Daniel Johnston at The Underground, May 8, 2007 (Image Credit: Mark Fenton)

B.A. Johnston is also a soloist who plays a beat-up guitar and a keyboard and lives at home with his mom, but that's where the similarities end. Johnston joyously abased himself for the crowd, sacrificing his dignity for the sake of entertainment. From fake-playing a keyboard song (and later actually playing the keyboard) to tearing off his shirt and sprinkling himself with dollar-store glitter, Johnston held nothing back in a hilarious set that featured copious references to Nintendo and deep frying, plus a surprising amount of flying snot.

Katie Stelmanis, guitarist for Galaxy in a solo performance, had a tough act to follow. Her earnest, plaintive, gothic- and industrial-tinged synth music (accompanied by fellow Galaxian Maya Postepski on percussion) felt awkward at first after Johnston's riotous major-key antics. However, her powerful voice and dissonant melodies quickly established their own context and the crowd responded with spirit.

If you love Daniel Johnston, it's not for his musical skills.

His guitar playing is indifferent and amateurish and his piano playing, while more robust, still evokes the enthusiastic banging of a novice. His tempo fluctutates and miskeys abound.

Similarly, his voice is nasal, gravelly, wavery, and frequently off-key.

No, if you love Daniel Johnston, it's more likely for his magical pop sensibility, his haunting, evocative lyrics, his no-nonsense chord progressions, and the simple, universal themes of love and fear that he explores so doggedly.

Johnston has been making music for nearly 30 years, cranking out a seemingly relentless collection of home-recorded albums of simple piano- or guitar-based songs that buzz and hum and crackle like a teenager's secret experiment with a tape recorder.

This, indeed, may be part of Johnston's appeal: his music is so bare, so honest and vulnerable, that it inspires a kind of protective response from listeners who cradle his songs as if they were cradling their own stumbling artistic offspring.

It turns out that Johnston the man is as stumbling and vulnerable as the music he makes. Struggling with a lifetime of bipolar disorder punctuated by bouts of crippling depression, Johnston has suffered more than his fair share of misery.

He makes a remarkably improbable rock star - but, of course, the whole point of indie music is to stymie truisms and canned expectations.

I was delighted to read in last week's View that Johnston was coming to Hamilton, and I went with fellow RTH writer Mark Fenton to see him play at The Underground on May 8.

Despite the professional equipment and excellent sonics at the club, Johnston still managed to sound as lo-fi as if he were playing through a Radio Shack microphone. His beaten-up classical guitar helped; the vinyl strings thrubbed and buzzed under his trembling fingers.


Daniel Johnston at The Underground (Recorded by Mark Fenton)

The audience was highly protective, cheering every move and encouraging him through his apprehension.

After playing a song, he glanced briefly up from his songbook and asked, "How y'all doing?" It almost seemed as though he asked only because he's heard that's what you're supposed to ask. No matter: the crowd cheered uproariously.

A couple of songs later, he asked again, "How y'all doing?" and got an even bigger response.

About two thirds of the way through his set, his face sweaty and has hands shaking visibly, he paused and said, "It's really hard to be up here," his fragile voice breaking slightly on the words.

One might be tempted to think Johnston performs from within his own internal world, but when, in a lull between songs, an audience member screamed, "We love you!", he did a small double-take and smiled.

"We love you, too," he said before launching into his next song.

When he switched to the keyboard, he seemed to come even more to life, pounding away at the chords in two upbeat numbers that had his fans swaying in time.

Then he got up, snapped shut his songbook and shuffled offstage. His twenty-five minute set was over almost before it began.

It looked like he might not return, but just as the rhythmic clapping started to fragment, he burst out of his room and actually hopped up on stage to deliver a stirring a capella rendition of "Living in a Devil Town."


Daniel Johnson sings an a capella version of "Living in a Devil Town" for his encore. (Recorded by Mark Fenton)

It's probably impossible to know whether he was gratified or mystified by the packed crowd of young hipsters singing along to a song that was written not long after many were born.

With Daniel Johnston, the temptation is to look at him with a kind of sad pity, as though he were some kind of savant being exploited for his talent. His sweating, trembling performance and frail expressions of discomfort don't help.

However, the man was there to play a great show, and he didn't fail to deliver. Pity is as much a condescension as contempt: so I'll close by acknowledging the fact that for now, Daniel Johnston has overcome his devils to do what he loves.

Great review of an awesome (too-short) concert! Its really nice to have the youtube video clips as reminders of how magical Daniel Johnston was. Thanx!