Today, a Google search for the words climate change returns the Government of Canada's Climate Change website as the first result. 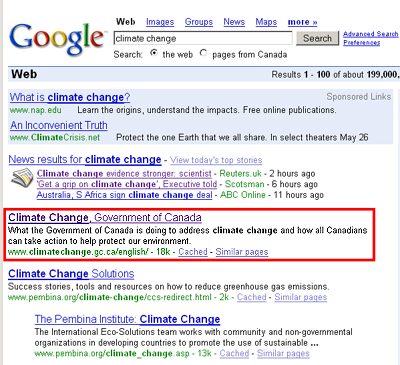 The Government of Canada's Climate Change website is the first result of a Google search. (Source: Google)

How drolly ironic, considering that the federal government has just abandoned its commitment to reducing Canada's greenhouse gas emissions via the Kyoto Accord, cancelled most of its projects to address climate change, meagre as they were), and announced a laughably-named "made in Canada" approach that mimics the US federal government's approach and relies on voluntary action toward voluntary targets.

The climate change website itself is already being colonized by the "made in Canada" meme.

This is doubly ironic, since the Kyoto Accord was heavily influenced by early Canadian support and advocacy, while the government's current plan essentially abrogates Canada's international obligations, replacing them with a unilateralist, unaccountable, and conspicuously Republican approach to climate change.

Before anyone accuses me of Conservative bashing, I'll gladly point out that despite Canada's prime Google ranking, the Harper government inherited a country that was already ranked nearly dead last among industrialized countries regarding its energy consumption and greenhouse gas production.

However, the problem with the Liberal government was not its rhetorical stance toward climate change but the fact that it refused to match policies and resources to that stance. The new government has chosen to thrown out the latter instead of implementing the former.