The AGB is determined to be vigilant and visible in their support of 2SLGBTQIAP by placing critical conversations on gender diversity back into the public education sphere.

When Suzanne Carte joined the Art Gallery of Burlington (AGB) as Senior Curator in November 2018, it was clear she was passionate about inclusion and embracing as many voices and artistic experiences as possible. 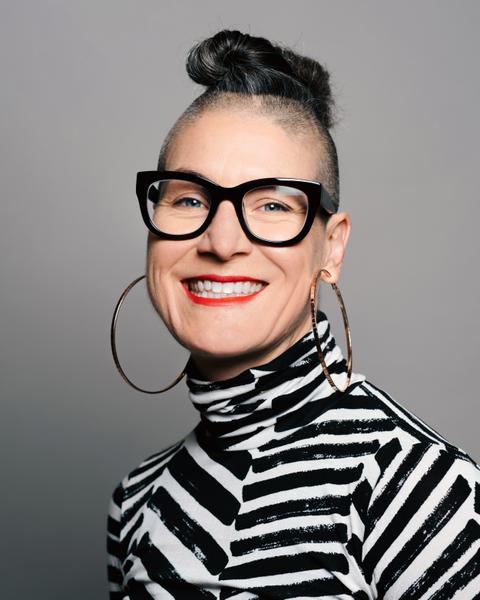 Carte, an award-winning curator and cultural producer, was the former Assistant Curator at AGYU. She had a bevy of accomplishments under her belt, but was looking for new challenges outside of the academic institution. During her time at York University, she was an integral part of students' experiences and worked directly with a multitude of student leaders and organizations focusing on artistic expression and social justice advocacy.

While Carte found room for movement and growth at the AGB she soon realized the position involved merging the old with the new. "I was naïve in the beginning, but had to become sensitive and respectful to the AGB's history and relationships between the gallery and the guilds." Carte is encouraging a younger generation of artists to showcase their talents while still paying homage to the seven art and fine craft guilds.

Carte inherited a wealth of artistic material that had been acquired over the 41-year life of the AGB. By freeing up storage space Carte was able to expand existing galleries. In the process, Carte established the Artist Material Fund (AMF), a grassroots recycling endeavour that benefits artists in the Greater Toronto Hamilton Area (GTHA). The project offers a variety of previously stored materials to artist studios, libraries and youth driven galleries.

The Workers Arts and Heritage Centre (WAHC) in Hamilton, Ontario is one of Carte's favourite galleries because, "The staff are smart, motivated, and practice what they preach. I have immense respect for them." The WAHC stored material for the AMF on their third floor and offered it to artists at no cost during the closing of her exhibition, Division of Labour.

Carte is caring for a collection, as well as a community, that is shifting from the object to the idea with a people focus. She wants to be, "...in a listening campaign. Listening to see where people are at, what they want, and who Burlington is. Listening to the edge of change."

According to Carte, "Burlington looks like how I want my programming to look. Black, brown, Indigenous, queer, immigrant, and intersectional." She hopes more young families and people see themselves reflected in the exhibitions. And she is accomplishing that one show at a time.

Carte jumped in with both feet when she launched this summer's exhibitions. The evening of May 24th Burlington saw crowds like the gallery had never seen before. Jeremy Dutcher, member of Tobique First Nation in New Brunswick, was on hand to sing selections from his Polaris and Juno award winning album, Wolastoqiyik Lintuwakonawa.

He was also there in support of Vutut Gwitchin artist Jeneen Frei Njootli's solo show, my auntie bought all her skidoos with bead money. Frei Njootli created living art on four huge sheets of steel that morph over time. Shadowy impressions of the hand-sewn beadwork made by the females in her family are transferred to the sheets using grease. These images alter with changes in humidity and temperature.

Frei Njootli performed I am she at the opening while creating another layer of images on the steel plate. The sound of her voice united with the rattling of the metal was captured on a playback loop creating a soundtrack that could be felt through the body.

150 Acts: Art, Activism, Impact also launched that night. Inspired by Canada's sesquicentennial this exhibit offers an essential moment of national reflection and an opportunity to question the relationship of nationhood to Canada's Indigeneity. The art practices are personal, conceptual, cultural, political, and social acts as well as meaningful responses to the Truth and Reconciliation Commission's Calls to Action.

Using essential pieces from the Art Gallery of Guelph's Indigenous collections in concert with contemporary art practices that showcase evolving Indigenous art forms, settlers are encouraged to actively engage in discussions around the collective histories and possible futures for this land we share.

Carte is following her superlative debut with no less than four groundbreaking shows.

Opening Friday, September 6, 2019, The Gender Conspiracy will be an extravaganza including a children's drag queen performance.

Billed as an Open Letter to the Trans and Gender Diverse communities in the GTHA to express ally ship in furthering the discourse on gender fluidity and identity, sexual orientation, same-sex relationships, and consent to promote the mental health and safety of all 2SLGBTQIAP communities.

The AGB is determined to be vigilant and visible in their support of 2SLGBTQIAP by placing critical conversations on gender diversity back into the public education sphere.

From January to March 2020, Division of Labour: Second Edition invites artists to become part of the dialogue about race, class and labour as they relate to cultural waste. Barter economy systems, community action around consumption, and circuits of solidarity exchange are more present than ever in the daily working lives of artists and cultural producers. Visitors will learn about the scarcity of resources, labour rights, and the lack of living wages in the arts. The exhibition illustrates the power and potential of reused material for artistic production.

Visitors to the art gallery will become immersed in the multimedia collage work of Burlington's senior media artist P. Mansaram when his self-styled Mansamedia is showcased from May to August 2020. Co-presented with South Asian Visual Arts Centre (SAVAC), The Medium is the Medium is the Medium explores the artist's decades-long practice of repetition as art, meditation, spirituality, falling in love, and as a way to finding god. The exhibit includes works from Mansaram's five-decade career and will invoke everlasting feelings of travel through time, dimension and territory.

Then, from September to December 2020, Vessel: A Collective Feminist Collection Project will (re)write the matriarchal history of the AGB through the permanent collection with co-curators and collaborators Ness Lee, Su-Ying Lee, Suzanne Carte, Ivy Knight, and Myung-Sun Kim.

The AGB's permanent collection of contemporary Canadian ceramics is the largest collection in the nation and will be used to unpack the feminist history of the AGB with local change-makers and leaders, by bringing the gallery's vessels and containers out of the vaults and into the public space.

This collection considers the implications of feminist knowledge, labour, production, support, and ingenuity while opening a space for cross-disciplinary, intergenerational conversations and critical dialogue.

Carte is successfully crafting an art gallery that is, "A space for intergenerational dialogue, intelligence fed by exhibitions, and a place to socialize, learn and have fun and the same time."

Open seven days a week, the AGB is a free public art gallery and community art centre that presents as many as 20 regional, national and international exhibitors a year. Located on one floor and with gender inclusive washrooms, the space has seven fully equipped studios, three galleries, a one of a kind gift shop, a sculpture courtyard and year-round conservatory.

Throughout the year there are free events, artist talks, screenings, and Sundays there are open studios for families.