The Niagara Escarpment is a steady visual reminder of Hamilton's struggle to reconcile its industrial development with its natural environment.

Hamilton sometimes gets a bad rap for being smelly and industrial, although that description has not properly fitted this place for some years. What gets missed is the natural beauty surrounding and splitting the largest urban centre on the Niagara Escarpment, including the sublime Cootes Paradise marshland, which greets drivers on Hwy 403 coming to the west of the city. 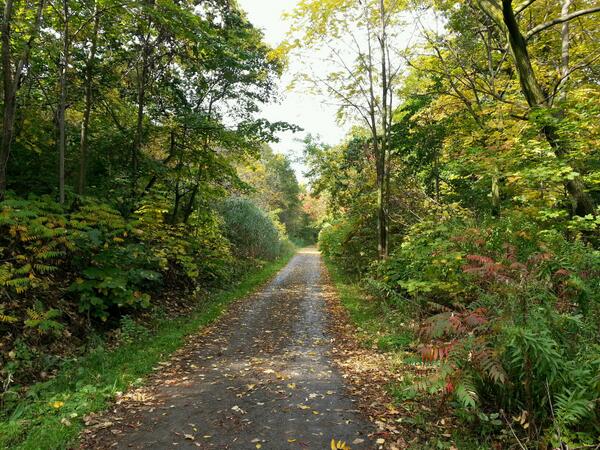 The Escarpment itself was never seriously affected by polluting heavy steel industries that once dominated Hamilton's economy, because they were located further north near the harbour. It, however, still remains seriously contaminated.

Tension exists between human activity and nature in Hamilton, says Lynda Lukasik, the executive director of Environment Hamilton. Sometimes there's a clash in planning between the city and the Niagara Escarpment Commission (NEC), both of which are responsible for respecting the provincial rules governing the Escarpment area.

Residents of the Stinson neighbourhood in the lower old part of the city just below the Escarpment are, for instance, challenging the city at the Ontario Municipal Board, for its approval for three multi-storey condominiums on Charlton St. E. on former industrial lands. 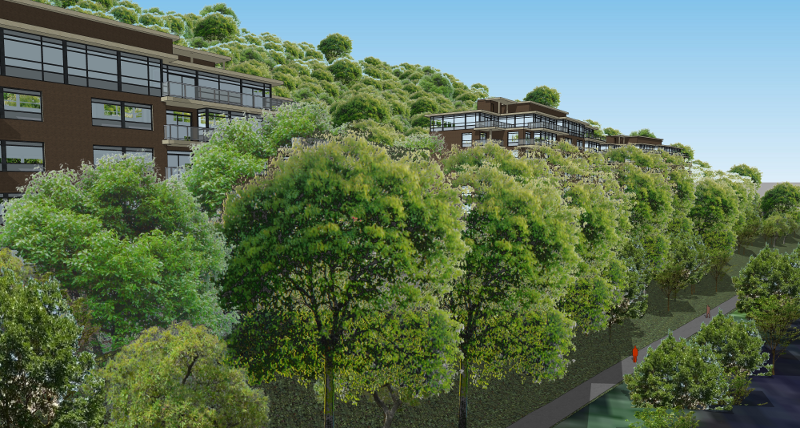 The NEC is also opposed to the project. "Visually, this is just a wonderful swath of green. And you then have this building rising up. So a lot of concerns were raised around the Escarpment viewscape," says Lukasik.

Environmental preservation is not new to Hamilton. People who hike and cycle the city's trails, including the old rail trail that snakes under the tree canopy along the Escarpment, may not be aware that all of this greenery including sensitive ecological lands like Cootes Paradise, under the stewardship of Royal Botanical Gardens (RBG), might not have happened, if not for Thomas McQuesten.

McQuesten was elected to Hamilton city council in 1913, and was a master builder of green space, playgrounds, bridges, highways and restored 1812 forts in the Hamilton and Niagara areas. Relying on landscape designers and architects, he was part of the civic beautification movement at that time, says Dr. Mary Anderson, a McMaster University historian and author of Tragedy & Triumph, Ruby & Thomas B. McQuesten. 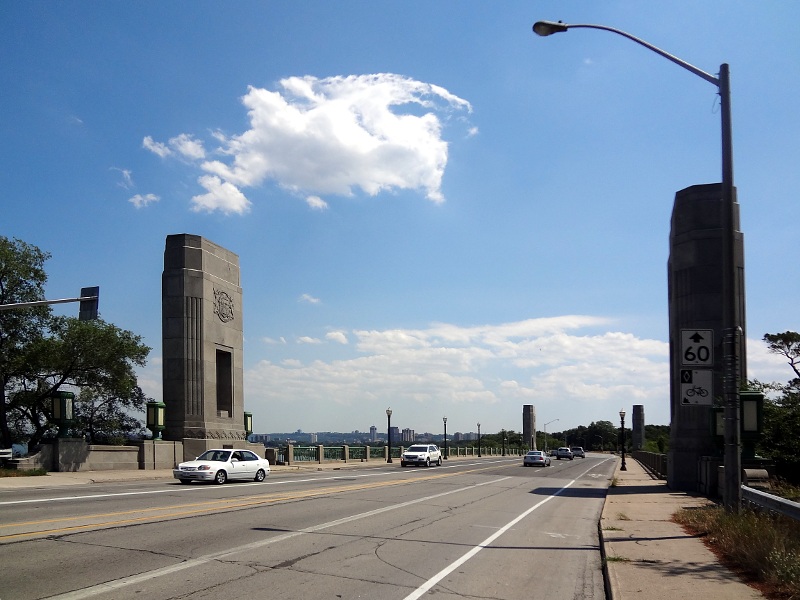 "His whole idea was that morality of the people would improve by their relationship with beauty," she says. McQuesten had a legacy to repair. What had once been a pristine wilderness at the end of Lake Ontario and other parts of Upper Canada was ravaged by European settlers. They arrived in the early 19th century and chopped down trees indiscriminately for firewood.

There were also small quarries on the Escarpment where local dolomite limestone was mined for use in constructing Hamilton's earliest buildings. Fortunately, the impact on the Escarpment geology was minimal, says St. Catharines-based historian John Bacher.

More serious were the lime kilns that "chewed up a lot of wood" in the heating process to turn limestone into mortar for brick buildings, he notes.

By 1880, the Escarpment in Hamilton was denuded of trees. Reverend R. Burnet, as head of an Ontario fruit farmers group, expressed his alarm around that time: "Hamilton, which might have enjoyed a scene of beauty for generations yet to come, has allowed the face of her fair mountain to be barbarously shorn of the leafy covering, to the great detriment of the city." 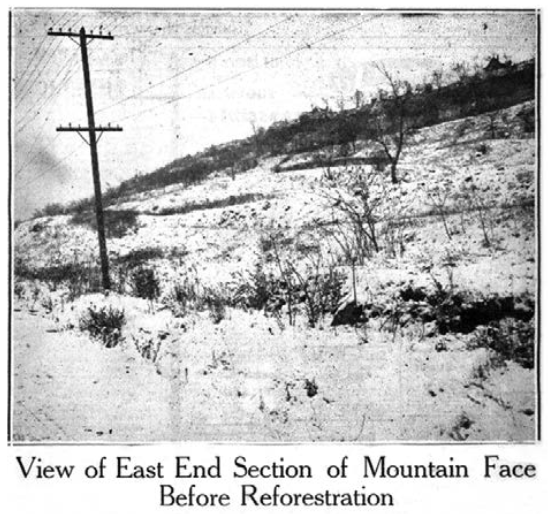 It was not until the 1920s that serious reforestation began in the Hamilton Escarpment under Thomas McQuesten, who by 1922 had joined the city parks' board. "The Escarpment was reforested gradually and brought back to life between 1920 and 1980," says Bacher, author of Two Billion Trees and Counting - the Legacy of Edmund Zavitz.

McQuesten acted in concert with an Ontario-wide program of reforestation under the auspices of visionary forester Edmund Zavitz. What also impresses Bacher is that McQuesten ensured that trees originally native to the Escarpment in the Hamilton area were replanted, including black walnut, white pine, red cedar, white oak and red oak.

McQuesten might have had reservations about the controversial Red Hill Valley Parkway which opened in 2007 to allow traffic through what was a sensitive wildlife corridor in east Hamilton.

The road connects the Queen Elizabeth Way (QEW) along Lake Ontario to the Lincoln Alexander Parkway on the other side of the Escarpment.

Would this keen forester have supported Hamilton's cull of thousands of trees for the project? "He would have pushed [the Red Hill Parkway] further east," suggests Anderson. Yet McQuesten, as Ontario's minister of highways, was also responsible for the QEW, Canada's first superhighway, which was built in the 1930s between Toronto and Fort Erie.

Anderson argues that McQuesten had the thoroughfare designed so that drivers could zip past parks, trees and farms to their destinations. As a man of his time, he might not have understood the argument made by biologists today, that roads disrupt the migration of birds and animals like coyotes, squirrels and reptiles. 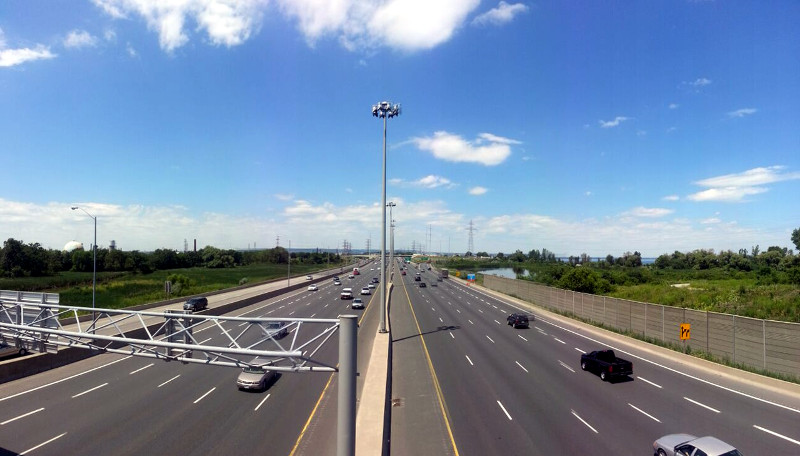 David Galbraith, head of science at RBG, says that the fragmentation of habitat for wildlife and indigenous plants remains an ongoing concern. His organization is working with private property owners and nine different agencies to better connect the sensitive bio-diverse lands in the Hamilton and Burlington areas, through the Cootes-to-Escarpment EcoPark System.

"We have a pattern of development in southern Ontario that slices up the landscape into smaller and smaller pieces. And when that happens, the chances of any species surviving over the long term are diminished," he explains. A wildlife crossing over Hwy 6 has been discussed but it is at a very early stage, Galbraith says.

Tension remains between humans and nature. "A main goal of the Cootes-to-Escarpment EcoPark System is to facilitate the movement of animals and plants among isolated patches of remaining natural habitat through protection and stewardship of corridor areas," explains Galbraith.

"However, this must be taken in context and with the realities of the actual land se and planning situation for the landscape as it is today."

One positive sign might be that part of King Road in Burlington is temporarily closed every spring to allow for the movement of endangered Jefferson salamaders.

This article was first published in Niagara Escarpment Views, Summer 2015.

Paul Weinberg is a Hamilton based freelance writer. His articles have appeared in Raise the Hammer, Hamilton Spectator, the Monitor (Canadian Centre for Policy Alternatives), rabble.ca and the Globe and Mail Report on Business.

I have to disagree on blocking the construction of the Charlton condo buildings - intensification is easily one of the best things we can do to fight climate change without heavily compromising our lifestyles. The green-space is already broken by Charlton street and the industrial land it will be built on, so that environmental argument falls a bit flat for me.

I understand worries about it obstructing the view of the greenery, but how far do we have to go before a building ceases to be in your "back yard" for NIMBY purposes?

Some cities have a system where builders must compensate people who will be losing sunlight from cast shadows - this helps reduce NIMBY complaints and also encourages developers to more carefully consider shadow-casting in their designs. Maybe we should be looking at that approach?

would this be so bad?

I think that looks awesome! Is that east coast Canada?

This could have been a swap, making construction much easier for the developer and putting the land back into the escarpment open space. Next step would be linking the escarpment to the shore and beginning to grow back a green web through the lower city.

Intensification talk is a whole other subject that needs some detailed criticism. Incidentally, the supposed advantage of building where the infrastructure already exists is nonexistent here. If my memory is correct, the proponent has to install 300K of water/wastewater capacity to service this project - in fact, he wanted to city to pay half, a notion which staff rejected in their report on the project. Never did hear how that was settled.

good point. That Charlton condo project can easily be said to have the same principles of connecting people to nature as the High Level Bridge entry to Hamilton along York Blvd designed by McQueston.

Imagine the reception to McQueston's plans if it were being proposed today?

I think it's too easy to focus on the abstract sustainability rationale for "intensification" as crutch to justify development projects. Why stop with one project on the escarpment? Or why bother protecting any natural feature? In dense, compact, transit-supportive cities we just filled in creeks and ravines at will during the late-19 and early 20th centuries. Back then we just took what we wanted and remade the natural landscape at will to suit urban needs. McQueston selectively addressed that legacy in the 1920s.

I imagine that today the shack-dwellers that were forcibly evicted to make way for McQueston's plans in Cootes Paradise would raise the hackles of social justice activists, meanwhile his tenure as Minister of Highways in the 1930s would make him a lightning rod with transit activists. He was operating in different times, with a different view of past and emergent problems, and when urban pastoralism and technological modernism were in vogue.

The so-called industrial land that the apartment complex is proposed to be built on could be allowed to revert to back nature via a land-swap, perhaps for some city-owned parking lot in the lower-city ... that would yield some transit and urbanism supportive intensification.